Home » World News » One dead, more than a dozen injured, after car drives into Berlin crowd 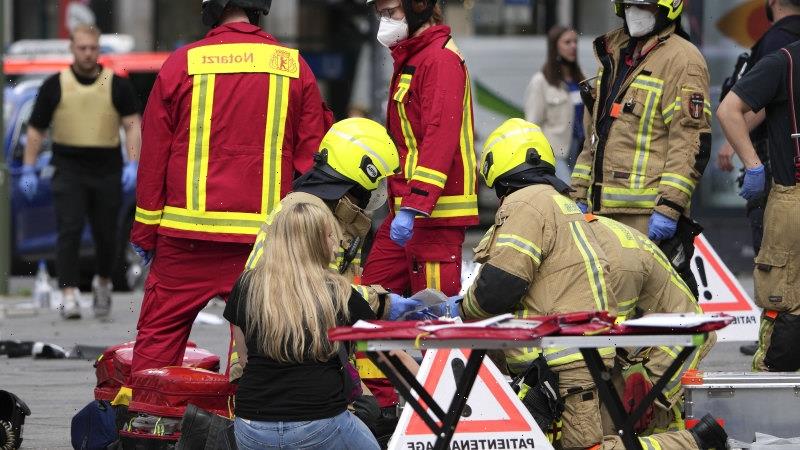 One dead, more than a dozen injured, after car drives into Berlin crowd

Berlin: A 29-year-old man drove into a crowd of people in Berlin on Wednesday (Berlin time), killing a teacher and injuring 14 of her students, as his car twice veered onto a pavement in a popular shopping district, officials said.

Police identified the driver as a German-Armenian man, whose vehicle eventually crashed into a shop window. He was detained by bystanders and handed over to the authorities. 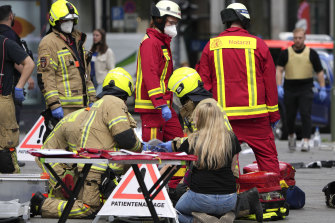 Rescuers help an injured person after a car crashed into a crowd of people in Berlin.Credit:AP

It was unclear whether it was an accident or a deliberate act in a street near the war-ravaged Kaiser Wilhelm Memorial Church, one of the German capital’s best-known landmarks, police said.

The fire service earlier said a dozen people were injured and six were in a life-threatening condition. Police later said 14 students were among the injured.

The teacher was accompanying a class of 10th grade students from the small town of Bad Arolsen in the central German state of Hesse, Hesse’s public broadcaster said. That would most likely make them 16- and 17-year-olds.

Officials denied a report by Germany’s Bild newspaper the driver had left a letter of confession in the car. Instead, investigators had found posters about Turkey, which has troubled relations with Armenia. 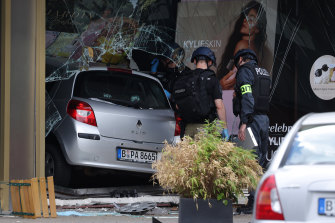 Police investigators stand near a car that ploughed into pedestrians in Berlin.Credit:Sean Gallup/Getty Images

“We haven’t clarified everything yet,” Berlin’s mayor Franziska Giffey told reporters at the scene.

“It is too early to speculate” about what caused the incident, an Interior Ministry spokesperson earlier told a regular federal government news conference in Berlin.

The incident revived memories of 2016, when a man in the same area of Berlin hijacked a truck, killed the driver and drove into a crowded Christmas market and killed 11 more people.

Investigators were looking into whether the incident was a deliberate attack or possibly an accident with a medical cause, a police spokesperson said earlier, adding that the driver had received some medical treatment after the crash. 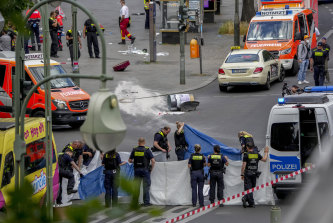 Police officers cover a dead body at the sene of the crash.Credit:AP Photo/Michael Sohn

Bild newspaper released a picture of the driver being detained, wearing a yellow pullover, jogging trousers and red trainers.

More than 100 emergency workers swarmed the scene after the incident. The small silver Renault car was lodged inside a shop after smashing through a plate glass display, Reuters images showed.

Blankets covered what appeared to be a body in a cordoned-off area guarded by police. Rescue workers moved apparently conscious people on stretchers towards an ambulance, including one woman sitting up, and another who covered her face with her hand.

“I heard the bang and the crash when we were in a store, and then we came out and we just saw the carnage,” John Barrowman, an actor, said in a video posted on his Twitter account.

The site, on a shopping street near a McDonald’s restaurant, was cordoned off. Bystanders looked up at a helicopter circling above.

“The federal government has, of course, learned of this terrible incident in Berlin today and is very concerned and distressed about it,” a government spokesperson said. “Our thoughts, our sympathy are with the injured and their relatives.”

The incident took place near the scene of the attack on December 19, 2016, when Anis Amri, a failed Tunisian asylum seeker with Islamist links, ploughed a truck into a crowded western Berlin Christmas market, killing 11 more people and injuring dozens of others.

Amri then fled to Italy, where Italian police shot him dead.

A police spokesperson said that police had learned from the experience in 2016 in dealing with Wednesday’s incident.

“The wounds of 2016 are not healed, everyone remembers it,” police spokesperson Thilo Cablitz said.