Home » World News » One in eight Londoners is immune to coronavirus 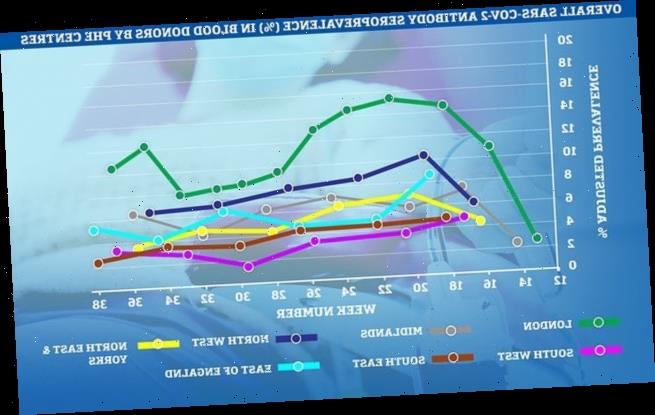 One in eight Londoners is immune to coronavirus

One in eight Londoners is immune to coronavirus: Up to 13% of capital’s residents now have Covid antibodies – while other regions are as low as 1%

London could be shielded from the worst of a second wave of coronavirus because one in eight people in the capital have developed antibodies.

There is growing optimism that the UK’s largest city is not seeing a rapid rise in case numbers because a higher percentage of residents have become immune to the virus than in any other region.

Recent data from Public Health England shows a prevalence of SARS-Cov-2 antibodies among blood donors as high as 13.4 per cent.

The figures from London stand in contrast to the rest of the country, with the North East and Yorkshire showing a 3.9 per cent prevalence, and the South West region at 3.5 per cent. 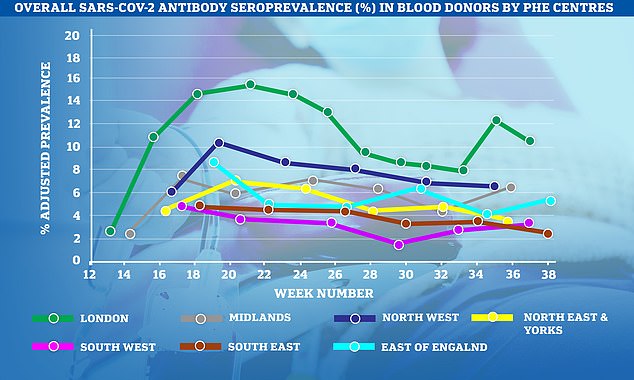 London could be shielded from the worst of a second wave of coronavirus because one in eight people in the capital have developed antibodies, according to data from Public Health England

And in the north west, which has been largely placed under local lockdown for the past month, had a prevalence of 6.8 per cent in the latest figures, suggesting high infection rates in the region had meant more people produced antibodies.

The rate of antibodies in the population does vary over time, and government advisers are believed to have suggested up to 20 per cent of the capital’s residents could be immune to the virus, according to the Sunday Times.

While cautiously pleased by the new data, advisors have also warned ministers that having antibodies does not guarantee it.

The figures add to worries of an increasing divide between the north and south of Britain, with much of the north west and east under lockdown while rates remain lower in the south. 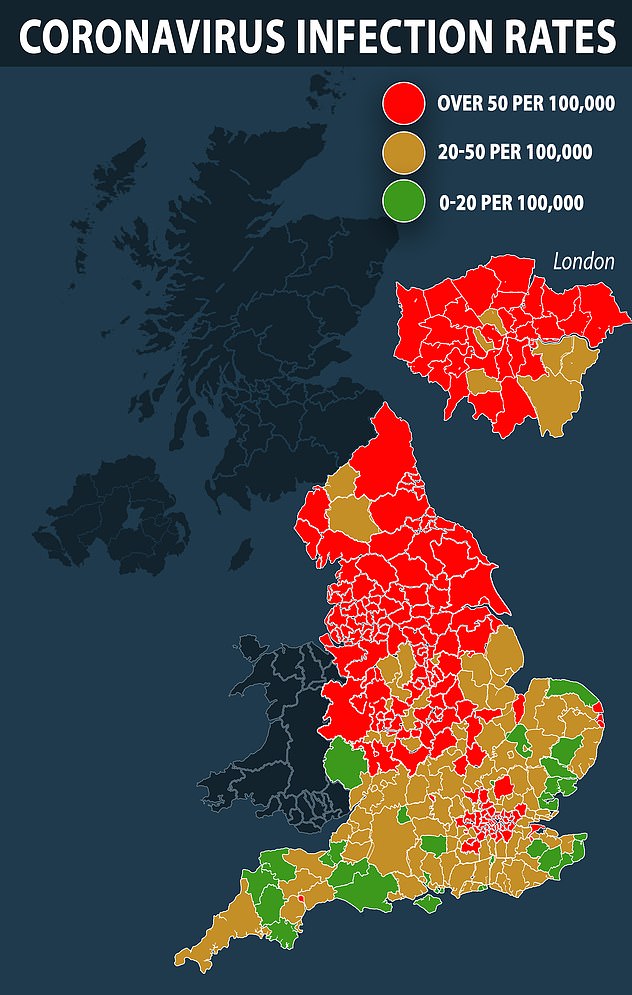 The figures add to worries of an increasing divide between the north and south of Britain, with much of the north west and east under lockdown while rates remain lower in the south 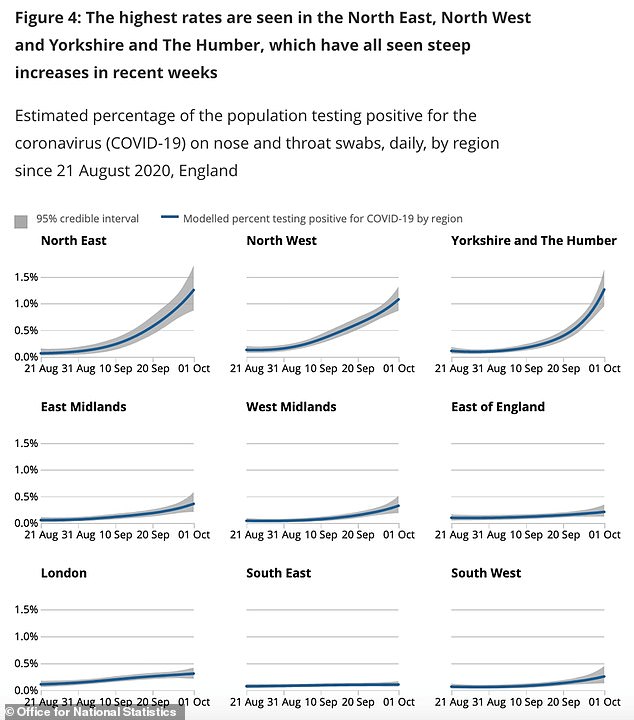 The Government is expected to unveil its ‘three-tier’ lockdown system on Monday, with the North East, North West and Nottinghamshire all predicted to fall under the strictest category of measures – which will see bars and pubs forced to close but restaurants allowed to stay open until 10pm.

‘They are rising more quickly in the northwest, the northeast and Yorkshire and Humber than they are in the south of the country.’

Hopkins said a ‘concerning’ trend in northwest England was infections ‘rising quite fast’ among over-60s.

‘That’s the group of people that we know would need admission to hospital more significantly than the younger population.’ 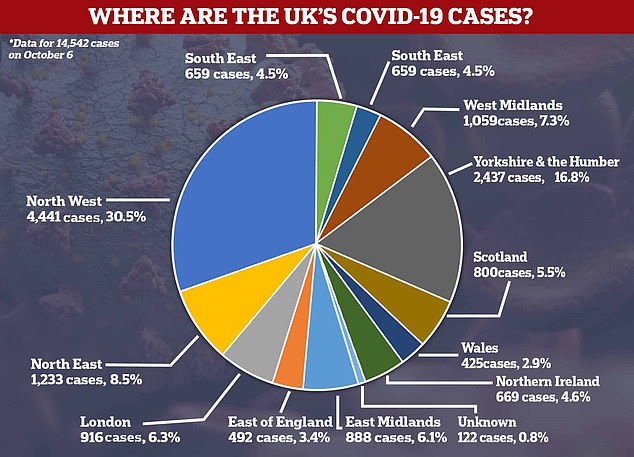 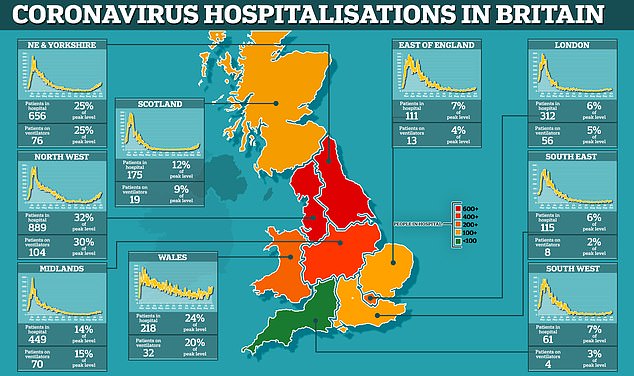 When a series of tougher measures was imposed in Bolton in early September, health officials did not foresee how some of its 287,000 residents would react.

Restaurants, cafés, bars and pubs were restricted to takeaway and even food outlets had to shut by 10pm, and the mixing of households became illegal.

According to The Times, this inspired groups of residents to organise nights out in nearby Wigan, then not under restrictions.

Taxi drivers in Bolton, whose fares had dried up overnight, were only too willing to ferry them to and from the nearby town. Disease spread from what was at the time the country’s Covid-19 capital and, within weeks, Wigan’s infection rate had escalated. 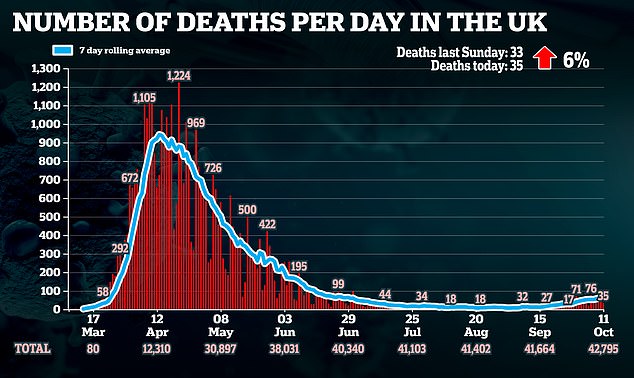 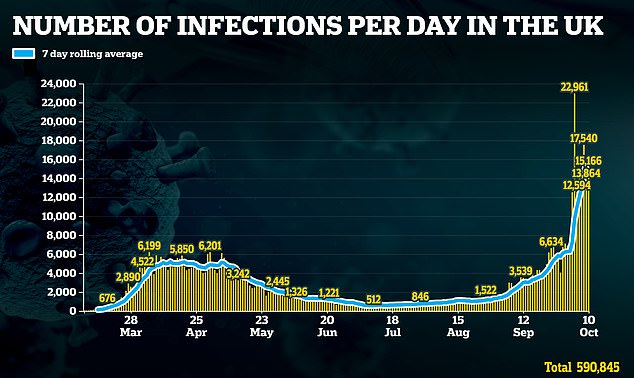 The UK death coronavirus toll in hospitals has risen by 35, the highest Sunday total since early June. 32 deaths were reported in England, and there were two deaths in Wales and one in Northern Ireland but none in Scotland

Continued contact between people in these areas does not explain the rapid rise complete, but is one of several factors behind the surge.

A public health official who works in Greater Manchester said last week there was ‘more vulnerability within our populations’ with ‘higher levels of deprivation, more density, more people in exposed occupations’.

Data from Google Mobility suggests London has seen fewer people returning to workplaces than the rest of the country.

It has also been suggested that colder weather affects how the virus spreads, by driving people indoors and depriving them of vitamin D.

How Much the Apartments in 'The Bold Type' Realistically Cost