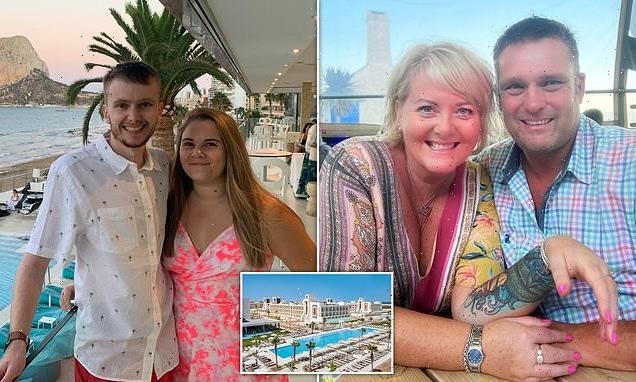 More than 80 British holidaymakers have launched legal action after being struck down with gastric illness during their stay at a luxury five-star hotel in Cape Verde.

Dozens of families say they came down with an illness – which left them with diarrhoea and even forced some to be hospitalised – while staying at the Hotel Riu Palace Santa Maria in Cape Verde, off the west coast of Africa.

The tourists, who booked their holiday through tour operated TUI, reported being served raw chicken and food covered in flies, as well as a strong sulphur smell at the hotel.

Now more than 80 holidaymakers who travelled to the hotel between May and October have instructed specialist lawyers to investigate after their dream trip turned into a ‘holiday from hell’.

Among those affected were Nichola Morley, 52, from Paignton and her partner Darren Cartwright, 57, from Torquay who travelled to the Riu Palace in May for a two-week break to celebrate Mr Cartwright’s recovery from cancer.

Just one day into their long awaited holiday, Ms Morley began to suffer from stomach cramps, vomiting and diarrhoea, and the following day her partner began to experience similar symptoms.

After several days of not eating the pair went to hospital where they were both put on a drip. On arriving back in the UK Ms Morley was placed on a course of antibiotics by her GP and spent three weeks recovering. 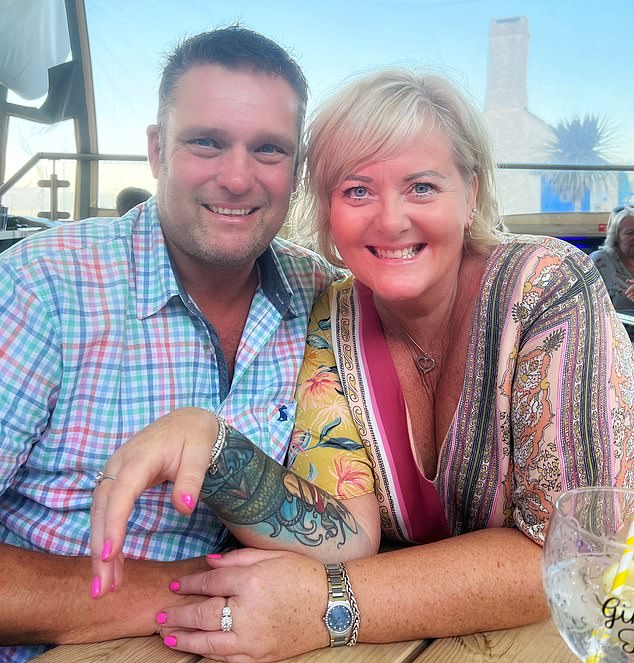 Nichola Morley, 52, and her partner Darren Cartwright, 57, (pictured) are among 80 British holidaymakers who have launched legal action after being struck down with gastric illness during their stay at a luxury five-star hotel in Cape Verde

Ms Morley said: ‘We had been looking forward to our holiday for quite some time, but within a day I was really unwell.

‘Darren fell ill the following day and he even began hallucinating. We called reception a number of times for help and to ask for a doctor but no-one came.

‘We ended up taking ourselves to hospital and were both put on a drip. By this point, we were both so weak as we hadn’t eaten for several days.

‘On the last day of our trip, we thought it would be a good idea to try and eat a little bit to keep our strength up for the journey home. When we got there, the salad was covered in flies. I grabbed a bit of bread and small piece of turkey, but when I cut it open it was pink and raw inside.

‘This was only a few days after I had complained about bloody chicken and I couldn’t believe it was still happening. It’s no wonder people were ill.

‘When we got home, I spent around three weeks at home, mostly in bed recovering. I really wish we had never booked the holiday, it turned into a total nightmare. All we can hope for now is some answers; it’s the least we deserve.’

Another tourist, Elizabeth Sutton, 46, was also admitted to hospital during her stay at the Riu Palace, with symptoms so severe that doctors were concerned she was having a stroke.

Ms Sutton, a beauty therapist, travelled to Cape Verde with her mother Patricia Reid in September for a much anticipated first holiday away since the pandemic.

After two days Ms Sutton began to suffer headaches, breathing difficulties and her eyes became sore and red. These symptoms were so severe that Elizabeth was admitted to hospital over concerns that she was having a stroke. She was treated and discharged with medication.

She then started experiencing gastric symptoms, including severe sickness and diarrhoea and was re-admitted to hospital where she was placed on a drip. Following multiple injections and more medication, Ms Sutton was again discharged. 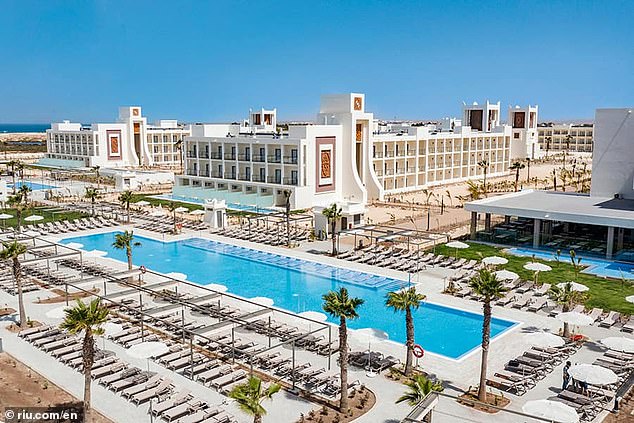 The tourists, who booked their holiday through tour operated TUI, reported being served raw chicken and food covered in flies, as well as a strong sulphur smell at the Hotel Riu Palace Santa Maria in Cape Verde (pictured)

Her symptoms have continued following her return to the UK and she was forced to take time off work. She is still under the care of her GP and awaiting the results of further tests.

Ms Sutton said: ‘This was supposed to be a wonderful holiday for me and mum, our first holiday together since the Covid Pandemic, and we booked a stay at a five star hotel expecting a bit of luxury and pampering. Instead the trip turned into the holiday from hell.

‘The smell of sulphur in the room was overpowering. It was so bad that mum paid for us to move to a new hotel, but by that stage I was already ill. The food at the hotel also appeared to be left for long periods of time uncovered, allowing exposure to flies and there were cats and birds in and around the hotel.

‘I’ve never experienced anything like it and when I went into hospital for the second time, I was really scared.

‘We feel that the hotel, food and facilities were a complete let down and since returning I’ve heard from more than 130 people on Facebook, some of whom were there prior to us, who say that they had similar experiences.

‘I’m angry that I’m still living with the symptoms, but I also feel lucky to have got home in one piece. I feel we all deserve some answers over what happened, especially as it sounds like others fell ill before we stayed there. It’s the least we deserve after what turned into an expensive medical nightmare.’

Another complainant is Hannah Smith, 28, who travelled to the hotel with her partner Oliver Dean, 27, for a week’s holiday in August.

Ms Smith, a school teacher, said: ‘The holiday was such a disappointment. Our symptoms were so bad that we had no choice but to see the doctor in resort and I continued to feel ill for weeks afterwards. 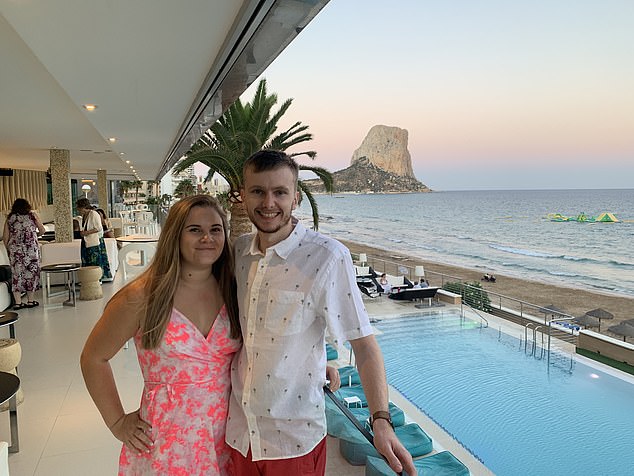 Hannah Smith and her partner Oliver Dean (pictured), from Wolverhampton, were both struck by severe gastric symptoms during their holiday to Cape Verde

‘It only really hit Oliver hard at the end of the holiday and, by that point, neither of us was in a fit state to help the other. The flight home was unbelievably difficult and Oliver was so ill, he had to take more time off work when we got back.

‘To be that ill on holiday is the last thing you expect, particularly at what is billed as a five star hotel.

‘I now wish we’d never booked the holiday, but I think the least we can expect is an explanation of what went wrong and some assurance that other people aren’t going through the terrible experience that we did.’

Jennifer Hodgson, an international serious injury lawyer at Irwin Mitchell representing those affected, said:  ‘We’re working with more than 80 people whose holidays were ruined by illness. Many of those continue to suffer from ongoing symptoms after returning to the UK.

‘Gastric illness can lead to long term health issues and their effect should never be downplayed.

‘Understandably, those we represent have many questions about how they fell ill, while many of the group have queried why they weren’t informed of illness at the hotel, before they arrived at the resort.

‘We’re determined to establish the answers our clients deserve and to support all of them following what has been a terrible experience.

‘If during the course of our investigations any issues are identified, it’s vital that lessons are learned to ensure that other travellers aren’t left with ruined holidays and potential long-term illnesses.

‘As part of our work and to assist with our investigations, we would be keen to hear from anyone else who may also have been affected by illness whilst staying at the Hotel Riu Palace, Santa Maria, Cape Verde.’

Hotel Riu Palace Santa Maria and TUI have been contacted by MailOnline for comment.

Premier League top scorers 2022/23: Who is leading the race for the Golden Boot? | The Sun