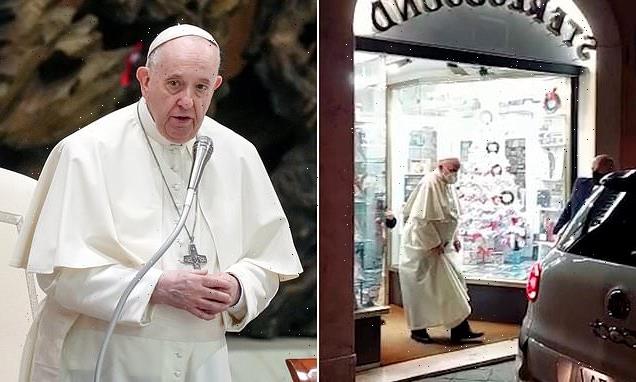 Livin’ on a Prayer? God Gave Rock ‘n Roll To You? Pontiff makes surprise visit to record store and picks up vinyl LP

Pope Francis left locals surprised after making an unexpected visit to a record store in Rome to bless the premises.

The 85-year-old pontiff, who is a lover of classical music and opera, was seen stepping out of Stereosound, located near the Pantheon, with an LP record in hand on Tuesday evening.

The head of the Catholic Church had visited Stereosound to bless the record store after its recent renovation.

The shop owners are understood to be longtime friends of Pope Francis, who has previously spoken of the power of music and is said to enjoy tango as well as classical composers. 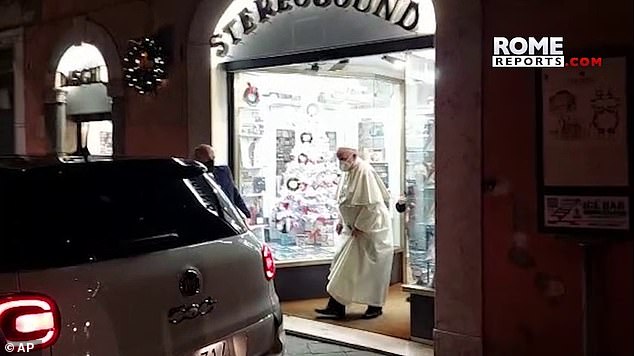 Pope Francis made a surprise visit to Stereosound record store (pictured), located near the Pantheon in Rome, with an LP record in hand on Tuesday evening 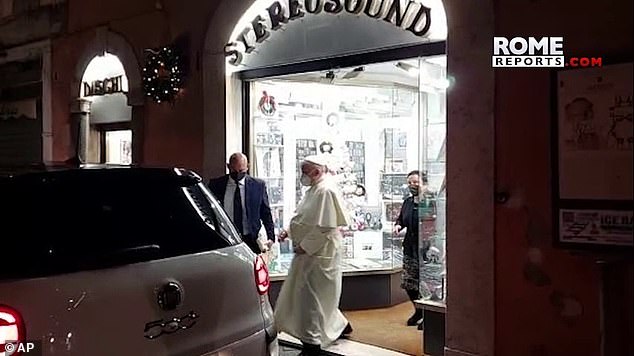 Stereosound’s owner Letizia said the pope was an ‘old customer’ who had been going to the shop since he was made a cardinal in 2001, according to Vatican News

The Argentine pontiff, who has previously said Mozart ‘lifts you to God’, left with a 33 RPM record of classical music, a gift presented by the owner’s daughter, Vatican News reported.

A small crowd gathered outside the venue while he was inside for around 10 minutes, but he made no public comments as he left and was driven away in a white Fiat 500L.

Stereosound’s owner Letizia said the pope was an ‘old customer’ who had been going to the shop since he was made a cardinal in 2001, according to Vatican News.

While he was Cardinal Jorge Mario Bergoglio, archbishop of Buenos Aires, he would visit their shop to buy classical music records and CDs when he was in Rome on Church business and stayed at a nearby residence for visiting clerics.

It is not the first time that the pope has been seen nipping into local stores as, in 2015, he was spotted going to an opticians in central Rome to change his glasses.

The following year, three years after being elected head of the world’s 1.3billion Catholics, he went to a shop to buy some new orthopaedic shoes.

Francis is known for living more simply than his predecessors, carrying his own briefcase and making his own phone calls. 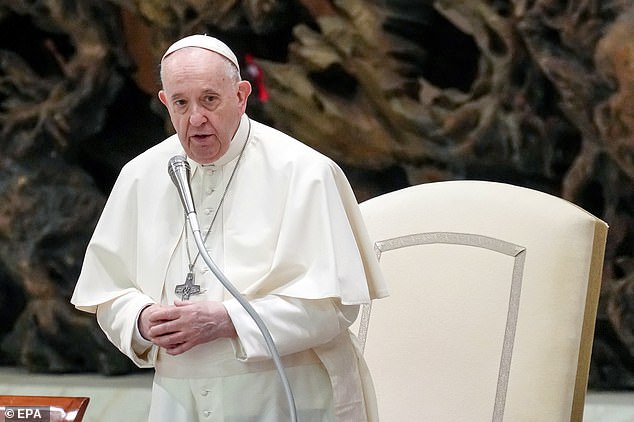 The head of the Catholic Church (pictured) had visited Stereosound to bless the record store after its recent renovation, a Vatican source told AFP

His visit comes after the pope warned against attempts to cancel culture, decrying ‘one-track thinking’ which he said attempts to deny or rewrite history according to today’s standards.

Francis made his comments in an address to diplomats, the main thrust of which was the condemnation of ‘baseless’ ideological misinformation about Covid-19 vaccines and the pandemic.

In his remarks on Monday, Francis warned of ‘a form of ideological colonisation, one that leaves no room for freedom of expression and is now taking the form of the ‘cancel culture’ invading many circles and public institutions’.

He used the two words in English in the midst of a long speech in Italian.

The ‘cancel culture’ controversy is particularly sharp in English-speaking countries, especially in Britain where debate has raged over the country’s imperialistic history.

Pro-active campaigns have seen the removal of several statues depicting historic figures who had a hand in the slave trade, such as Edward Colston.

While the pope did not mention any specific cancel culture examples, he said any historical situation must be interpreted in the context of its times and not by today’s standards.