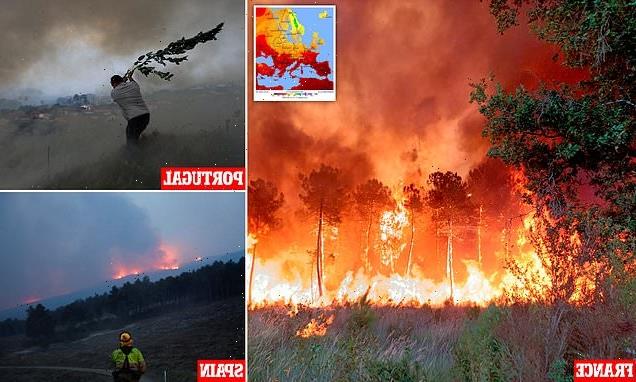 ‘Post-apocalyptic’ scenes as wildfires rage in Europe: Portugal sees July record of 47C (117F), thousands more are evacuated in France and a Spanish national park goes up in flames

Rampant wildfires are continuing to rage across Europe, destroying everything in their path including homes, golf courses, businesses and luxury villas in ‘post-apocalyptic’ scenes.

In France, thousands more were forced to flee their homes as 1,000 firefighters supported by ten water-bomber aircraft continue to battle two infernos that broke out on Tuesday, fanned by scorching heat, tinder-box conditions and strong winds.

The fires have now burnt 7,300 hectares in Gironde, an increase of 2,000 hectares just overnight, authorities said.

One of the French fires is in woodlands just south of the Atlantic resort town of Arcachon, a major attraction for visitors from around France and beyond during the summer season.

The other is in parkland not far from valleys dotted with vineyards that have struggled with hotter, drier weather than usual this year.

Some of the firefighting planes and equipment that were supposed to be displayed in Thursday’s Bastille Day parade in Paris was diverted for use on the Bordeaux region fires. Wildfires also broke out in southeast France and north of Paris. FRANCE: Several hundred firefighters struggled Friday to contain two wildfires in the Bordeaux region of southwest France that have forced the evacuation of 10,000 people and ravaged more than 7,000 hectares of land (pictured: a wildfire near Landiras) 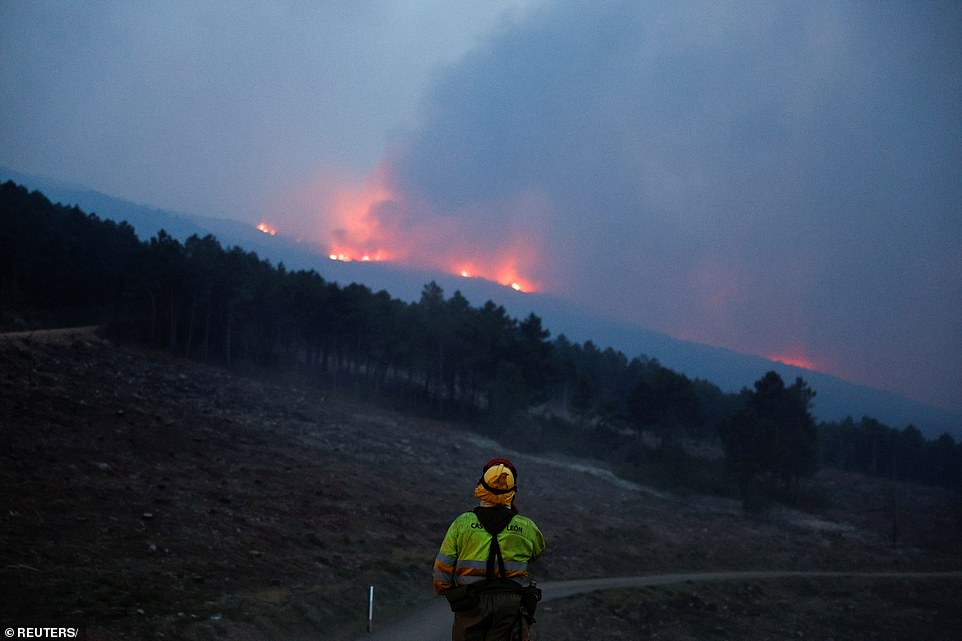 SPAIN: A firefighter watches a wildfire during the second heatwave of the year in the vicinity of Serradilla del Arroyo 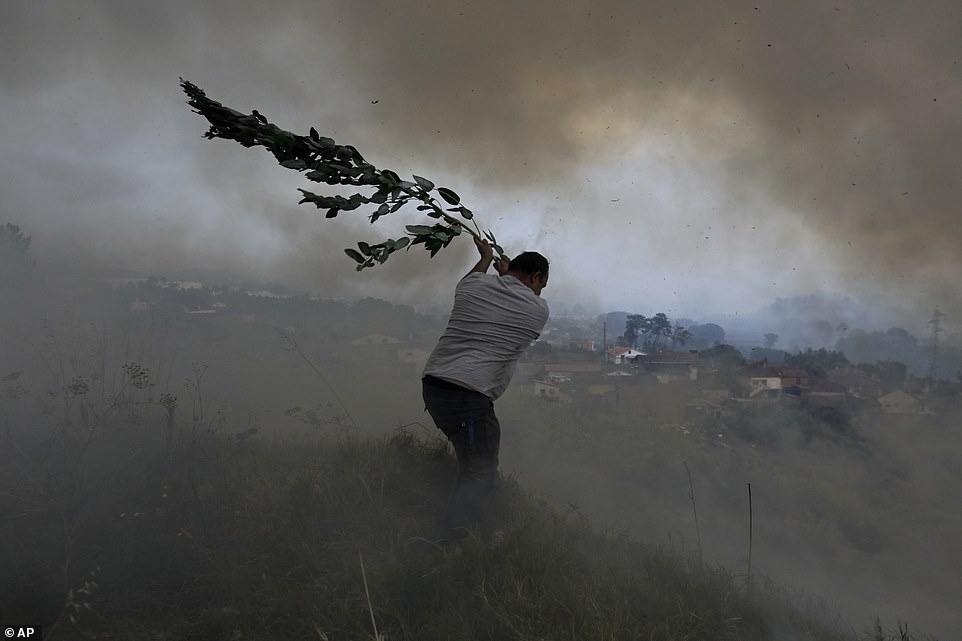 PORTUGAL: A volunteer uses a tree branch trying to prevent a forest fire from reaching houses in the village of Casal da Quinta 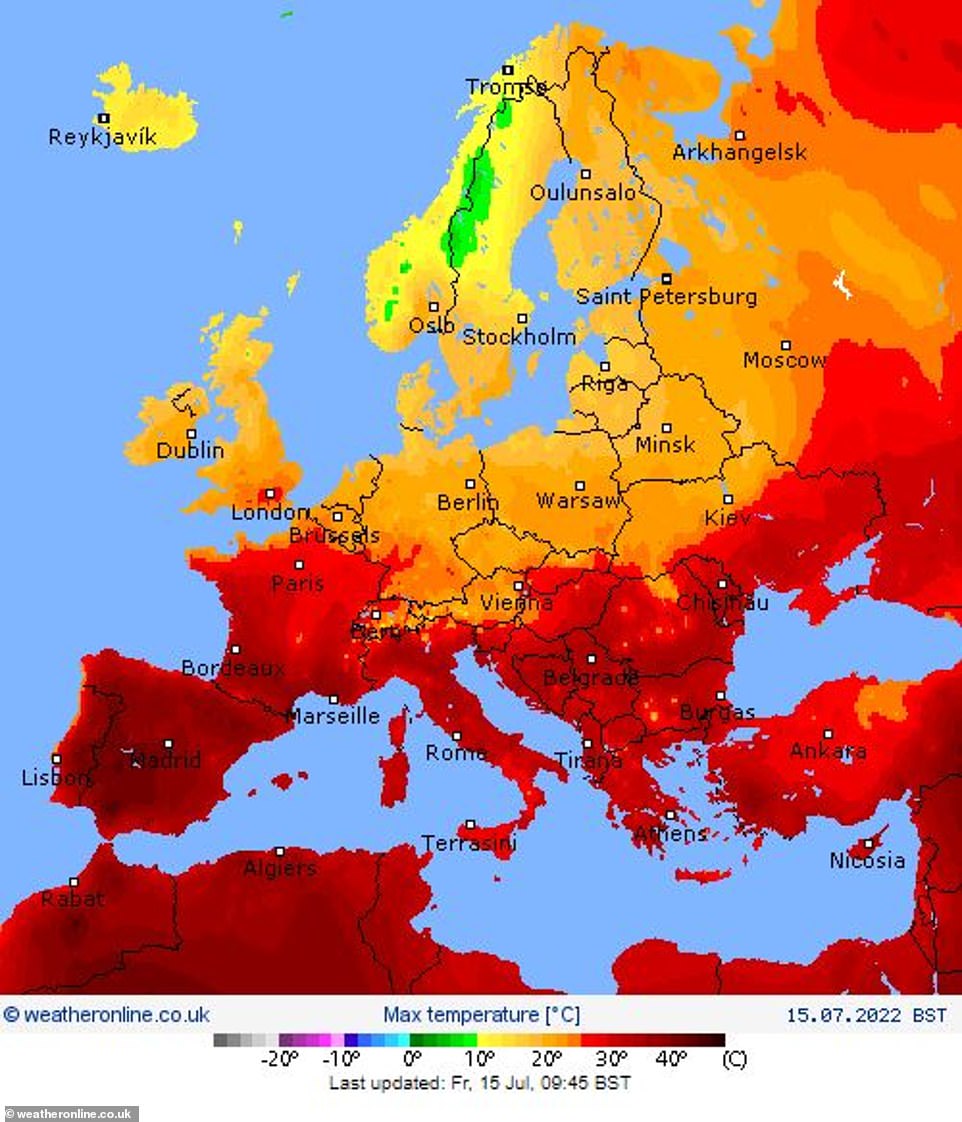 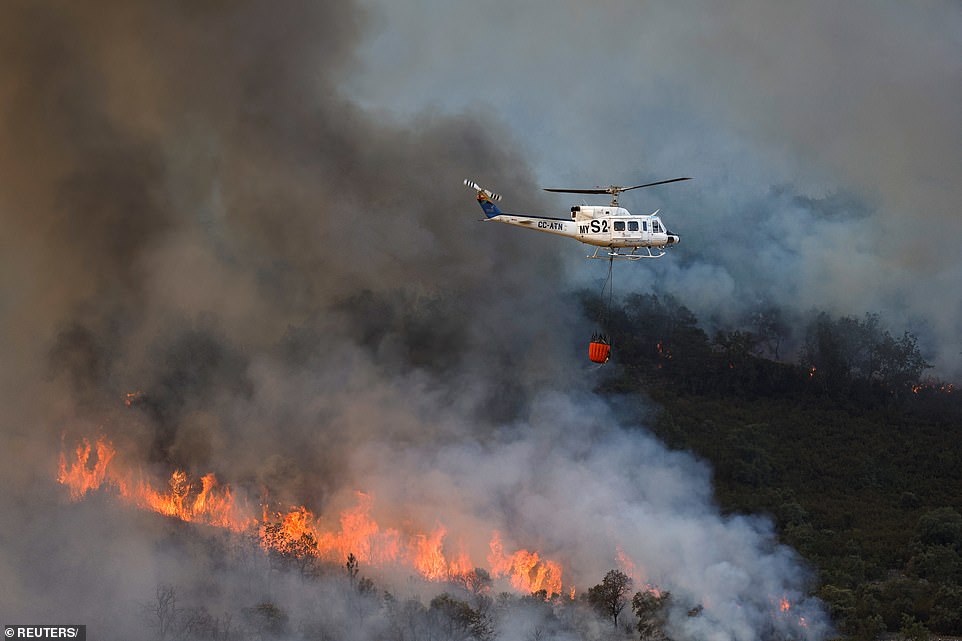 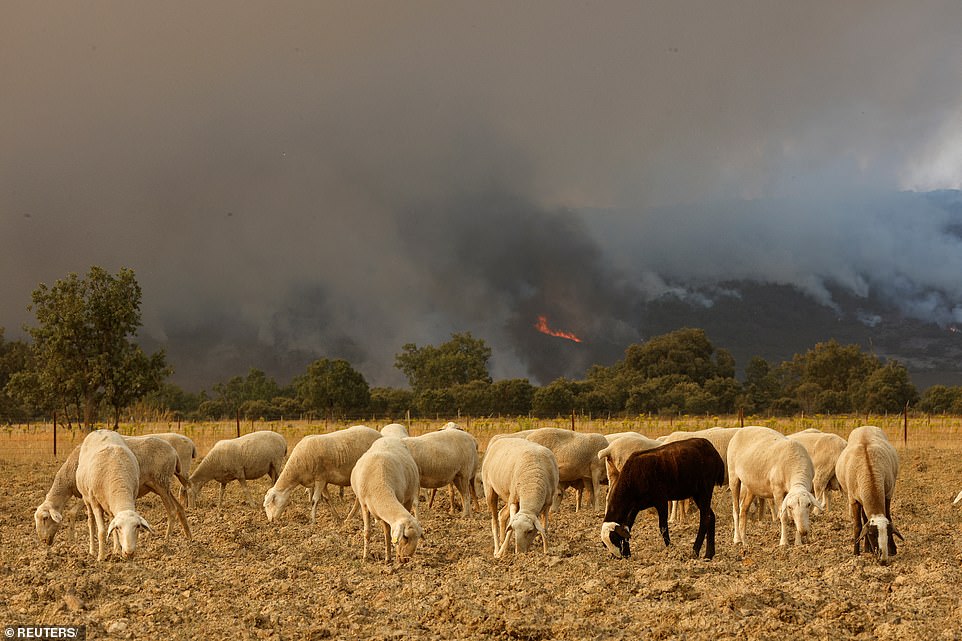 Sheep graze on an arid field while a fire blazes behind them, spreading dark smoke all over the region in Guadapero 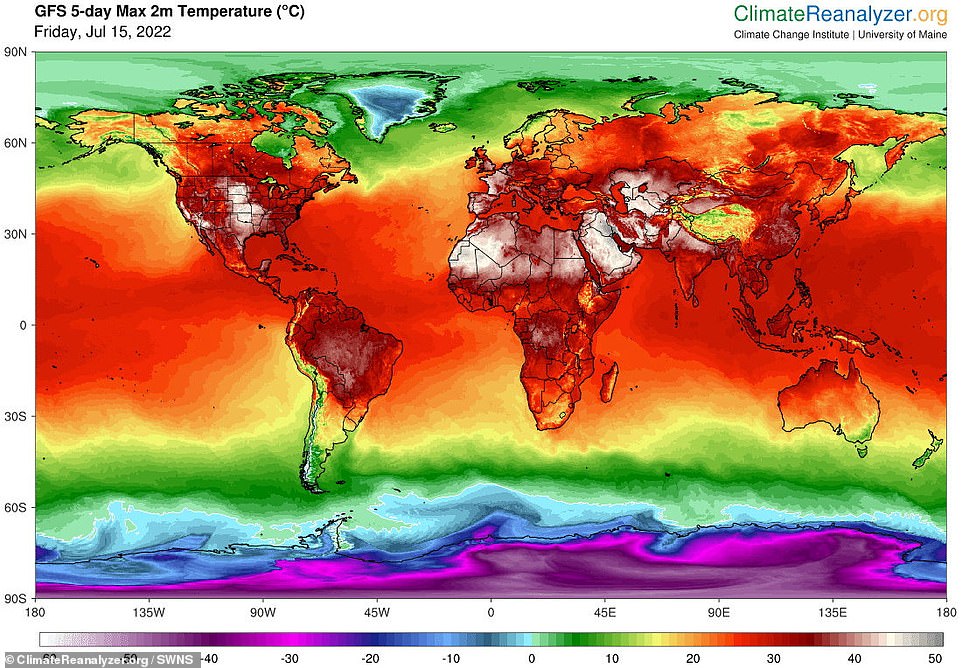 The suffocating heatwave enveloping Europe is spreading north from Africa, taking in Spain, Portugal and France, up to the UK

Another wildfire that broke out near the southeastern town of Tarascon on Thursday and burnt at least 1,000 hectares has been stabilised, according to firefighters.

Wildfires also raged across Portugal, Spain and Croatia, burning homes and threatening livelihoods, as much of Europe baked in the suffocating heatwave.

One of the two Gironde fires was around the town of Landiras south of Bordeaux, where 4,200 hectares have been burnt, roads closed and an extra 480 residents evacuated, bringing the total there to almost a 1,000.

The other blaze, that has already burnt 3,100 hectares, was along the Atlantic Coast close to the Dune du Pilat – the tallest sand dune in Europe – in the Arcachon Bay area, above which heavy clouds of dark smoke were seen rising into the sky.

Around 6,000 people were evacuated from surrounding campsites on Wednesday, and another 4,000 people early on Thursday.

Three houses and two restaurants were destroyed overnight in that area, authorities said.

Portugal has been particularly hard hit by wildfires this week. 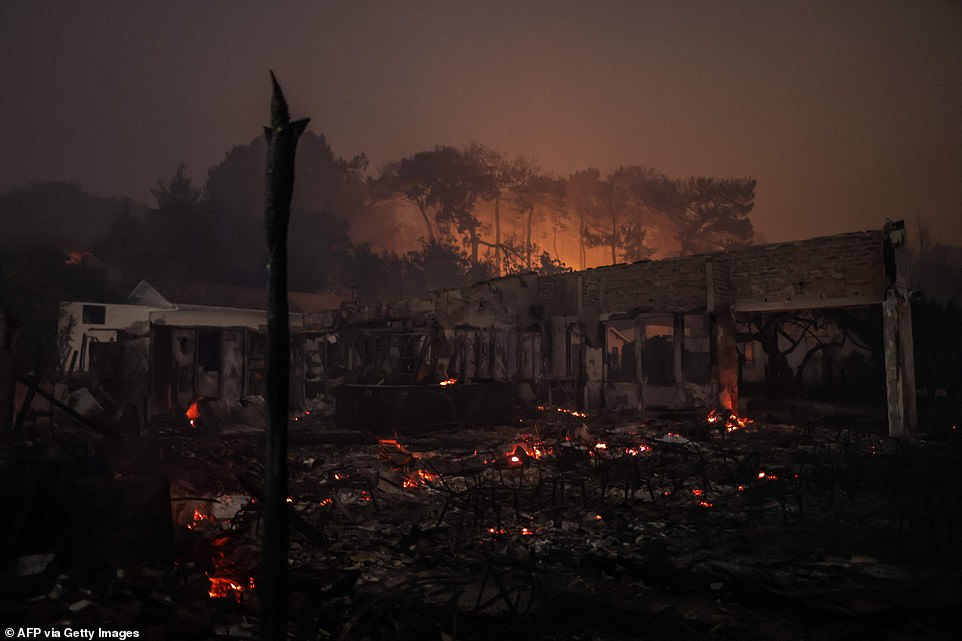 A restaurant is destroyed by flames due to a wildfire spreading in the area close to the beach of Cazaux lac, near La Teste-de-Buch, southwestern France 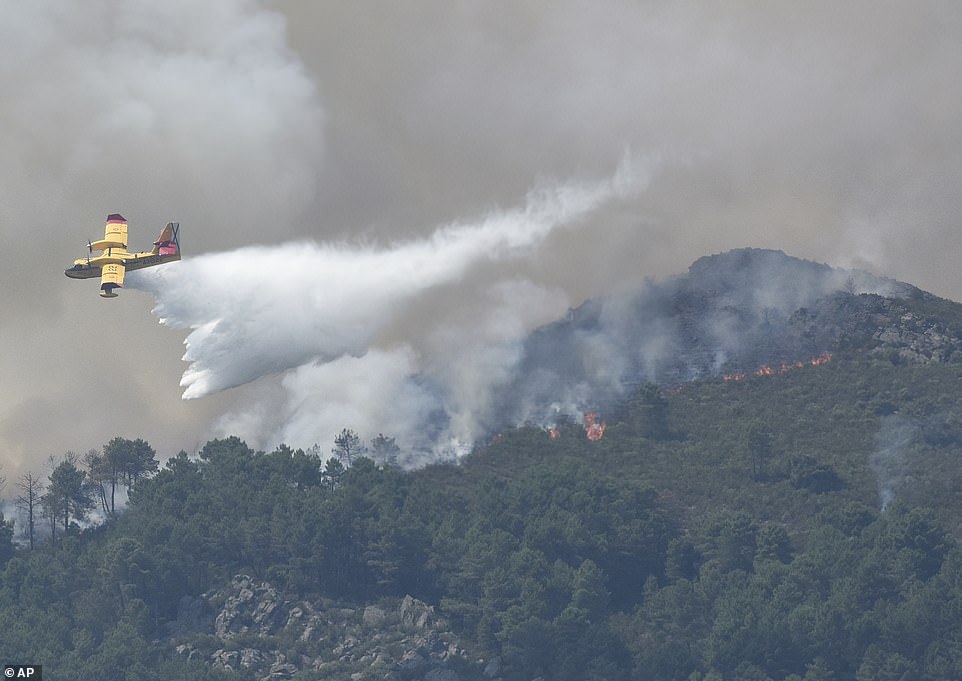 A firefighting plane drops water over a plume of smoke in Ladrillar, western Spain 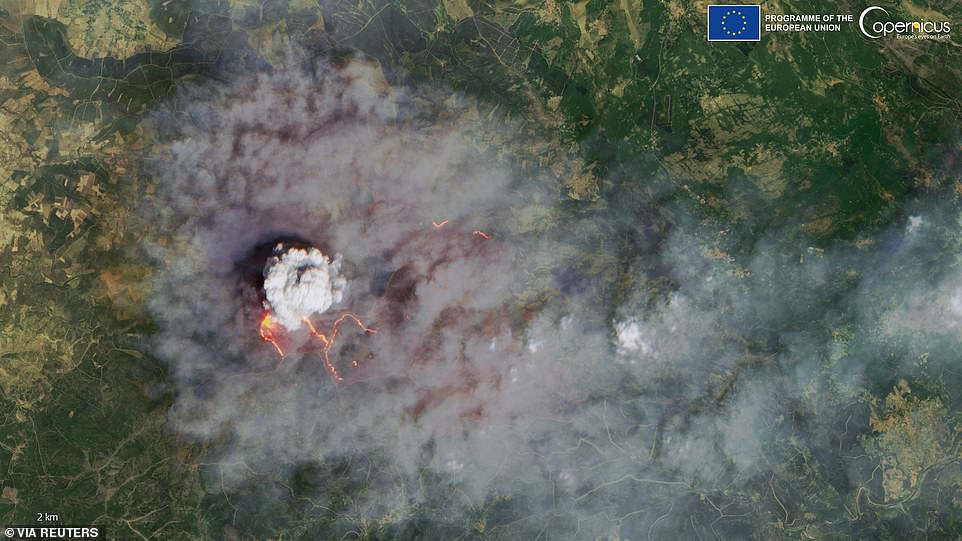 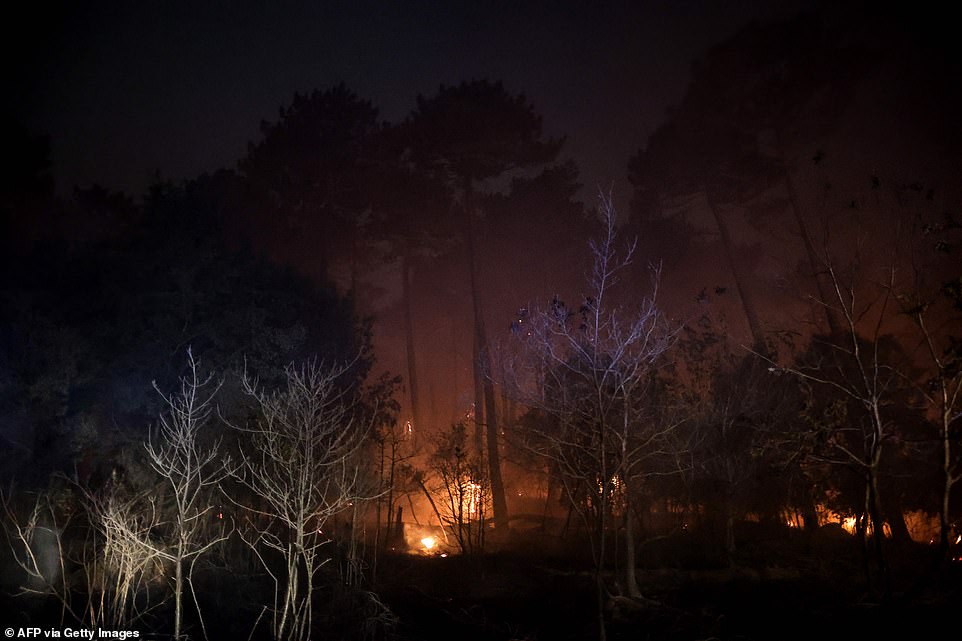 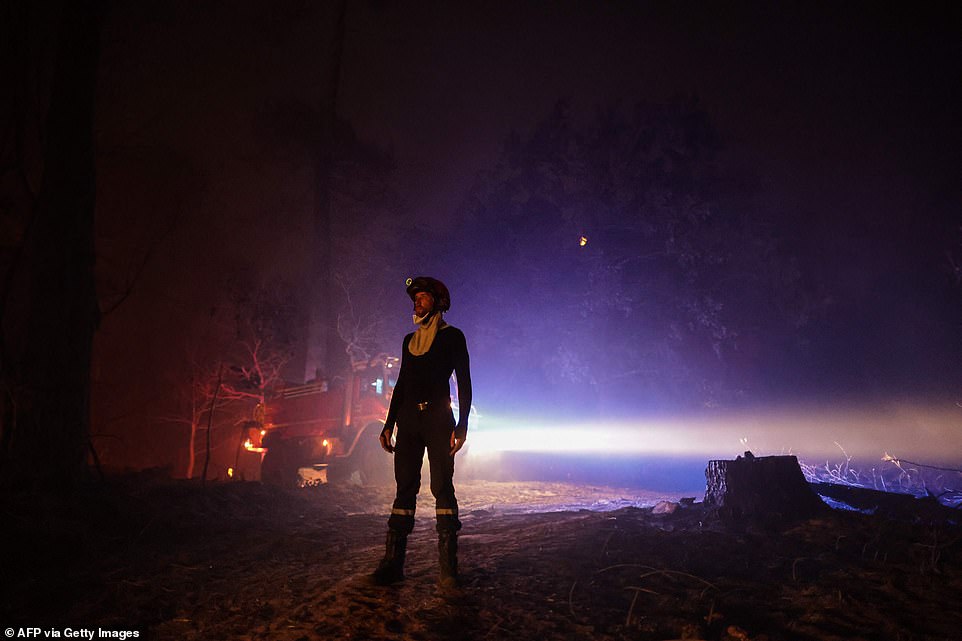 A firefighter stands as a wildfire spreads in the area close to the beach of Cazaux lac, near La Teste-de-Buch 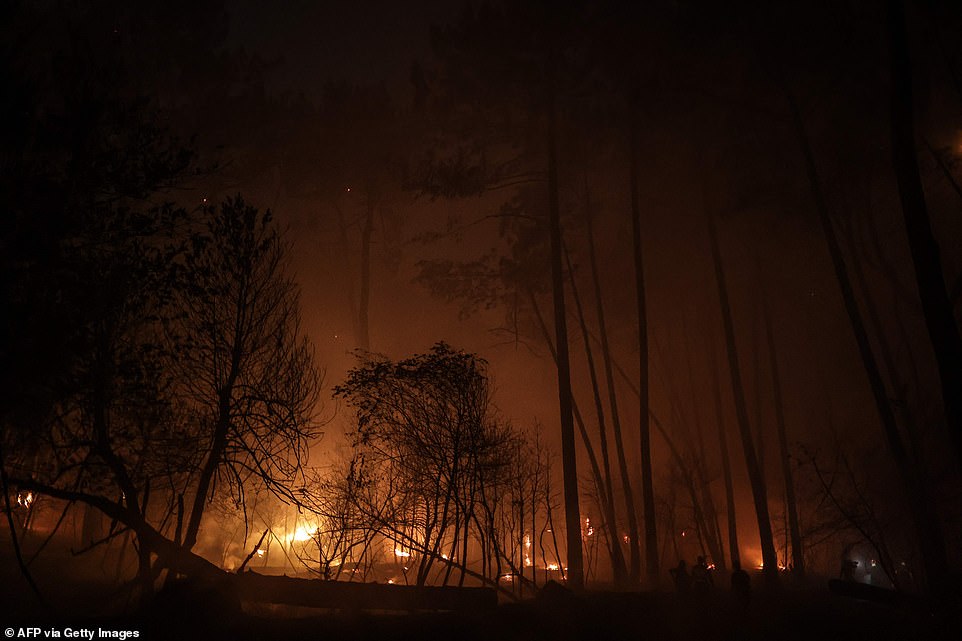 One of the two Gironde fires was around the town of Landiras south of Bordeaux, where 4,200 hectares have been burnt, roads closed and an extra 480 residents evacuated

More than 3,000 firefighters battled alongside ordinary Portuguese citizens desperate to save their homes from 13 wildfires that raged across the country, fanned by extreme temperatures and drought conditions.

The country also registered its record July temperature of 47C (117F) yesterday in Alijó, a record which has stood for 27 years.

The record temperature for any month was recorded in August 2003, only 0.7F higher than yesterday’s furnace-like heat.

Rebekah Vardy was among those caught in the midst of the deadly fires and saw the flames encroaching her luxury villa from her balcony.

The I’m A Celeb star fled the holiday home with her five children after water supplies were cut off.

Her footballing husband Jamie is back in the UK for pre-season training with Leicester City.

Vardy was staying at the six-bed villa in the south of the country – which boasts three pools, a gym and sauna.

The most concerning blaze was near the town of Pombal, where on Thursday aircraft and helicopters dropped water on flames that were tearing down a hillside lined with highly flammable pine and eucalyptus trees. 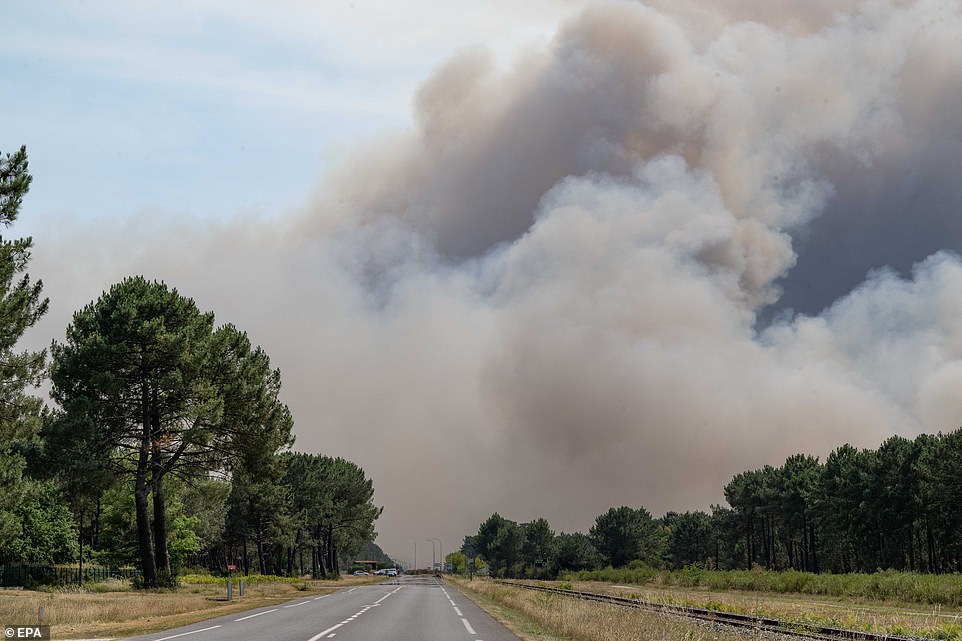 Another wildfire that broke out near the southeastern town of Tarascon on Thursday and burnt at least 1,000 hectares has been stabilised, according to firefighters 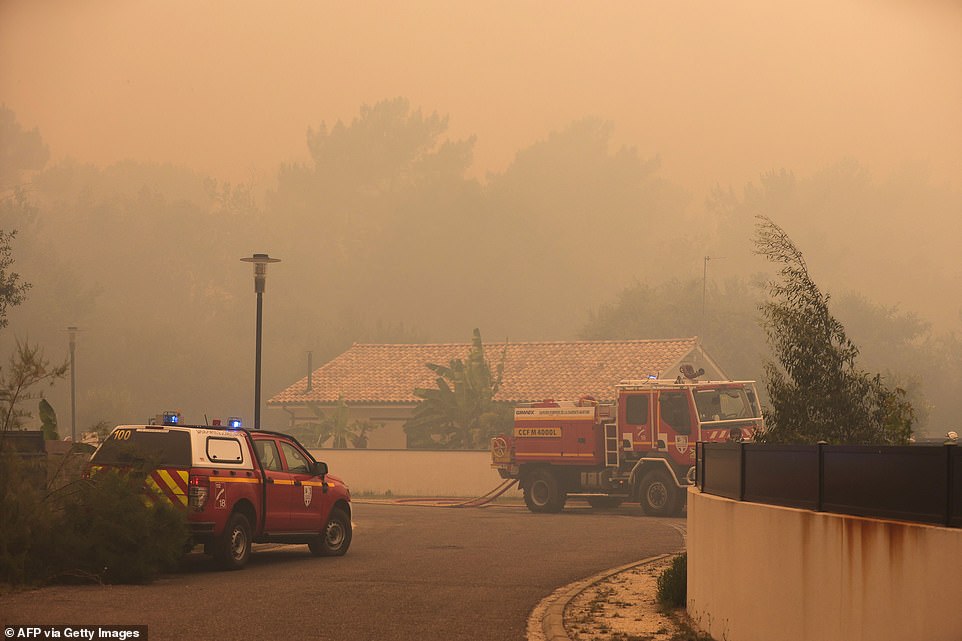 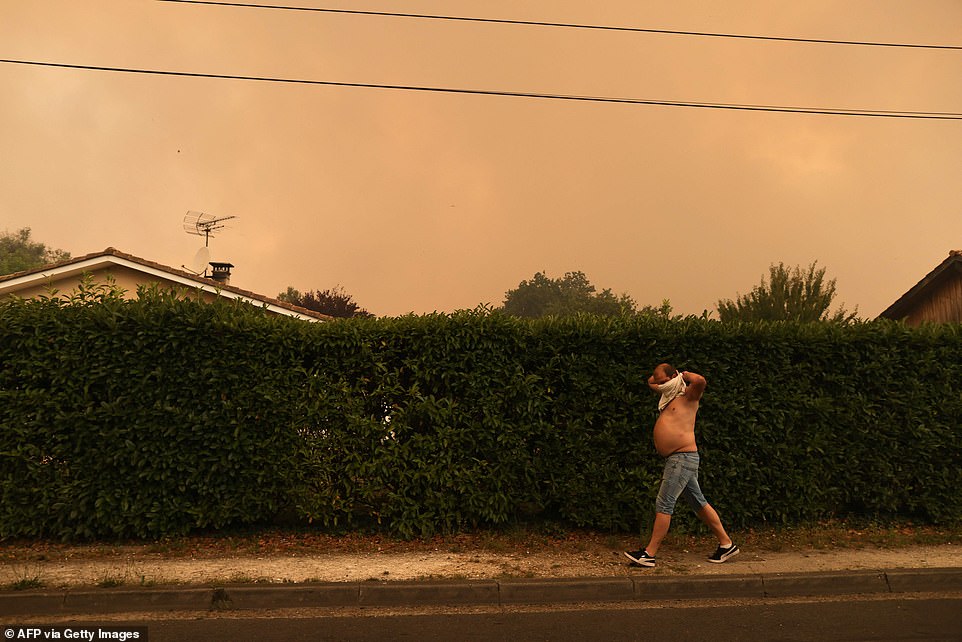 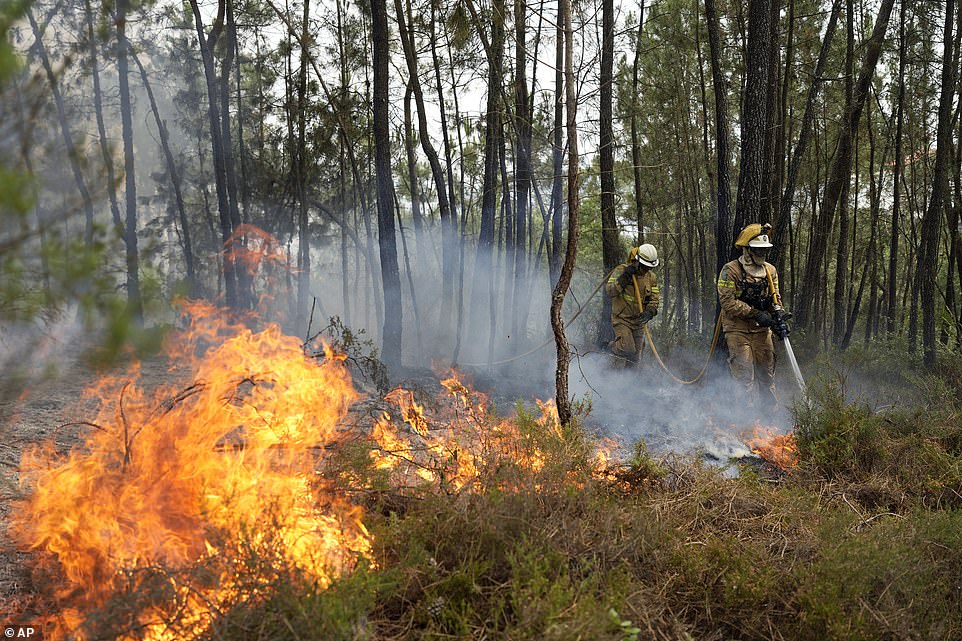 National Republican Guard firefighters put out a forest fire in the village of Rebolo, near Ansiao central Portugal 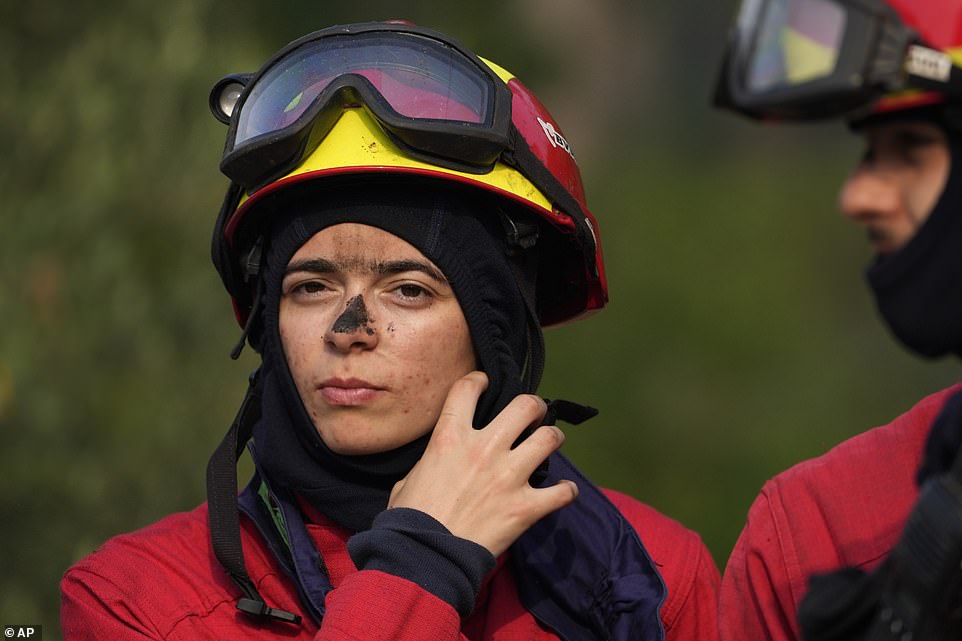 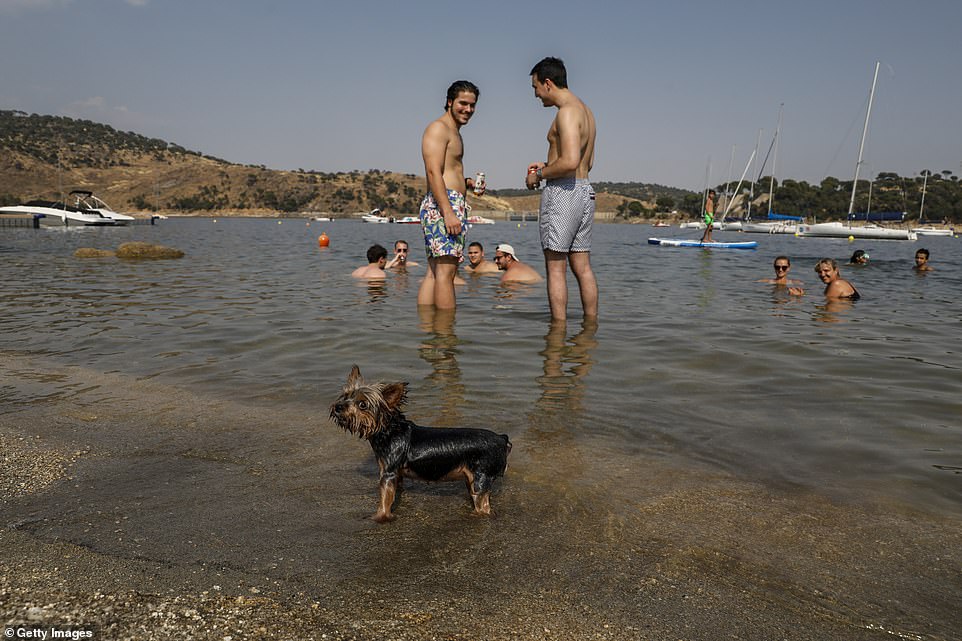 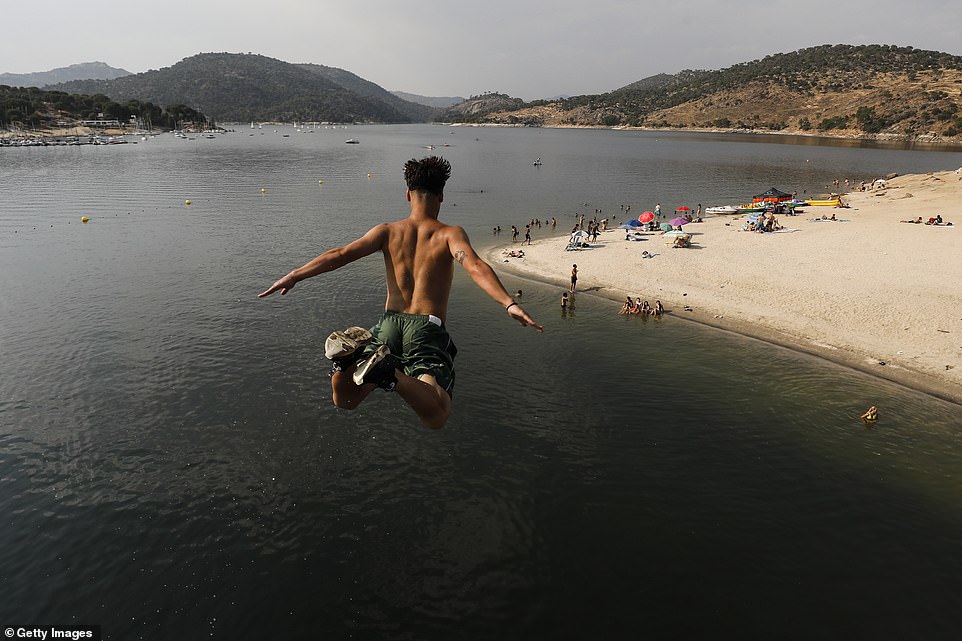 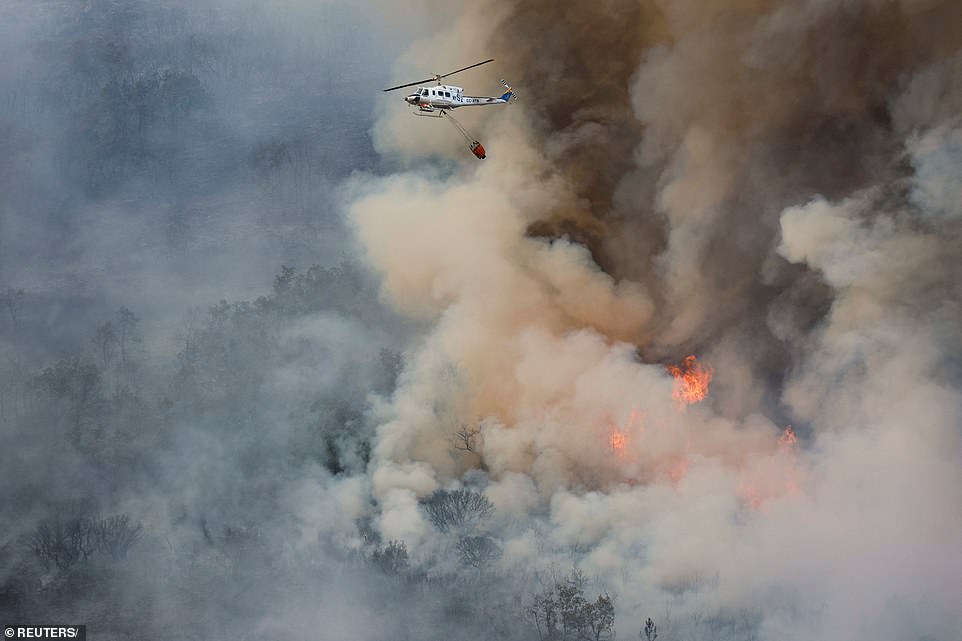 ‘When it gets to the eucalyptus it’s like an explosion,’ Antonio, an elderly resident of the nearby village of Gesteira, said as he anxiously watched the approaching flames.

Across the border, in the Spanish city of Seville, one of the hottest spots in Europe this week, some unions called for workers to be sent home.

Temperatures in many parts of Spain have been topping the 104F mark for several days and are expected to continue to do so through to next week.

Extreme temperatures and strong winds have hampered the emergency response to the Las Hurdes fire in Caceres and Salamanca.

More than 4,000 hectares have been razed so far in the four-day blaze which was sparked by lightning.

Troops were even called in to help evacuate a group of monks living in a Salamanca monastery near the inferno.

Another fire also broke out at Monfrague national park, a well-known bird sanctuary where many pre-historic cave paintings have been found.

Francisco Castañares , president of the association of friends of Monfrague, said: ‘In all certainty, the fire has already burned several black vulture nests, one of the jewels of the National Park.’

Queen, 96, beams in summer florals as she makes surprise visit to support hospice patients | The Sun