Two people in Victoria’s latest outbreak have unwittingly become “outstanding” super-spreaders after picking up coronavirus brought into the state by rogue NSW removalists.

There are now more than 15,000 primary close contacts, those considered as having the highest risk of developing COVID-19, linked to the outbreak. 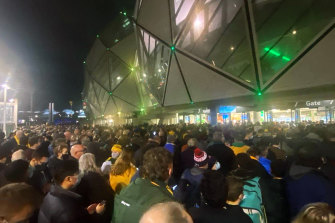 He said the first, a man aged in his 60s who was a resident of the Ariele Apartments in Maribyrnong, passed the virus onto his parents and a social contact, and also seeded outbreaks at the Young & Jackson hotel and the MCC Members’ Reserve, now at seven and 12 cases respectively.

Patrons at the Carlton versus Geelong AFL game who authorities thought could not have had direct exposure to the infected man had tested positive, forcing authorities to expand the group of people who need to isolate for 14 days, and to ask some people to undergo a second test.

Mr Weimar said authorities had also found a third case linked to the AAMI Park rugby game last Tuesday who was unlikely to have had close contact with the infected case at the stadium.

This suspected outdoor spread of COVID at sporting stadiums between fans with little contact will likely see changes to how future events are managed by Victorian authorities.

Outdoor events have previously been considered significantly lower risk for coronavirus spread but state health authorities have increasingly found fleeting cases of virus spread in these locations and other unexpected places.

Deputy Chief Health Officer Daniel O’Brien recently told The Age that last year people were considered at risk of catching the coronavirus if they had spent 15 minutes face to face with a positive case, or more than an hour in the same room.

But he said the new Delta and Kappa variants driving recent outbreaks in Australia posed a risk to people entering a room within 20 minutes of an infected person leaving.

Associate Professor O’Brien said that in the Southbank apartment outbreak “somebody just walked through a passageway or potentially an underground car park or communal rubbish bin area and picked up an infection from someone from a completely different building”.

Mr Weimar said one of the people identified in the July 10 MCG cluster, a Trinity Grammar teacher, has also become a super-spreader of the virus, passing it on just 30 hours after he is thought to have picked it up.

“That’s not unheard of in the world, but much faster than anything we’ve seen in these previous outbreaks.”

The teacher was the index case at the Crafty Squire pub while watching the Euro 2020 soccer final and at the Ms Frankie restaurant in Cremorne, as well as the rugby game at AAMI Park.

Mr Weimar said these super-spreading events were probably a result of the infectious nature of the Delta variant, and the fact younger people who were socially active were spreading it unknowingly.