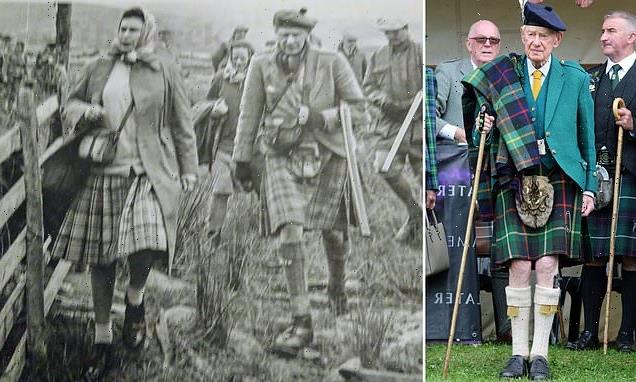 The longest-serving clan chief and decorated war veteran who was close friends with Prince Philip has died at 102-years-old.

He was awarded the Military Cross for his role in the Battle of Normandy and worshipped at Crathie Kirk in a seat directly opposite the Queen, his Balmoral neighbour.

He and the Duke of Edinburgh also had coffee together at Sandringham until both no longer could.

The Captain, whose lands extended from Perthshire to Aberdeenshire, passed away at his Norfolk home but a memorial is planned in Crathie Kirk in November.

Captain Alwyne’s was born into a wealthy and influential family on May 1, 1919.

He was the eldest of three children for Major Edward Compton of Newby Hall in Yorkshire and Sylvia Farquharson, along with sister Mary and younger brother Robert.

The chieftain was taught at Eton College and went on to study land economy at Magdalen College, Oxford, before interrupting his studies to join the war effort in 1939, not long after his 20th birthday.

Captain Alwyne joined the Royal Scots Greys, the last British Cavalry to give up its horses in 1941 for motorised units, where he climbed the ranks and earned his title.

He fought at the Battle for Caen in 1944, earning him the Military Cross for singlehandedly determining the position of the enemy even though he was seriously injured in the foot.

After the war the captain moved to Aberdeenshire.

His aunt Myrtle’s death in 1941 during the Blitz meant Captain Alwyne assumed the role of Chief and Laird of Invercauld. 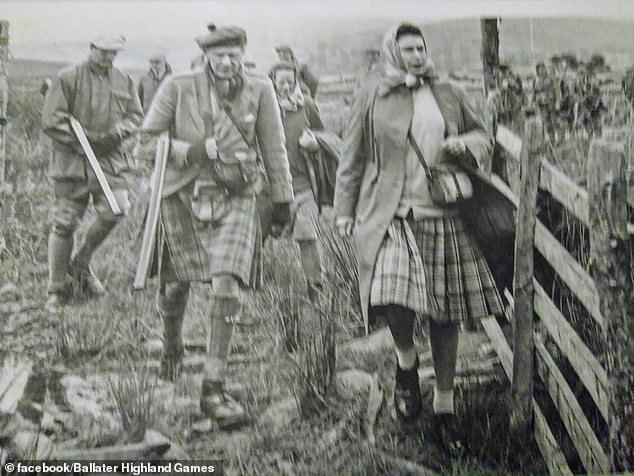 The war hero’s life was injected with glamour when he met British Vogue journalist Frances Gordon while recovering from war injuries.

The pair met when the tartan-loving fashionista came to help take inventory of Braemar Castle, but fell in love the visiting Captain Alwyne.

They married in 1949, and his wife was known for her quirky personality. 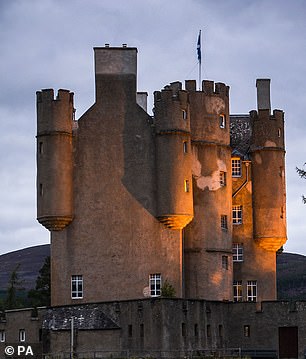 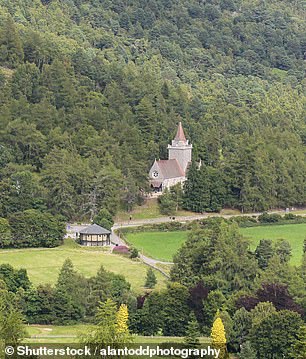 The captain lived next to the Queen, in Braemar Castle (left) and attended Crathie Kirk with her (right)

The Farquharson clan: first chief was killed by a cannonball

The clan started with Findlay Mor Farquharson who was born around 1480. He died as a Royal Standard Bearer at the Battle of Pinkie Cleugh in 1547 when he was hit in the chest with a cannonball.

He had many children who followed in his footsteps and many participated in historic Scottish battles.

Clan Farquharson fought in the Royalst army of the Marquis of Montrose, in the Jacobite army of the Viscount of Dundee, and in the ‘Fifteen and ‘Forty Five rebellions.

In 1715, they were part of the Clan Chattan regiment defeated at Preston, and at Culloden 300 Farquharsons under Francis Farquharson of Monaltrie, known as the ‘Baron Ban,’ were placed in the centre of the front line.

Simon Blackett, who knew Captain Alwyne for more than 25 years and worked as his estate factor said: ‘The Captain dedicated himself to being a responsible and benevolent landowner.

‘He was known affectionately by tenants and staff as The Laird.

‘And he took this incredibly seriously, because he knew the importance of what he presided over, given the scale of lands he inherited.

‘The most humble of men, with a quick wit and a friendly word for everyone he met.

‘He was held in such high regard by employees, tenants and neighbours because he considered himself merely the custodian of the land.’

Along with lands across the mainland, the Captain’s father also passed him down an estate on the Isle of Mull called Torloisk.

His commitment to the north Scottish community only grew.

Captain Alwyne was a member of Aberdeenshire County Council from 1949 to 1975 and vice-patron of the Braemar Royal Highland Gathering.

He saw to it that Braemar Castle – the seat of the clan – become community owned and was vigilant in his duties as chieftain of the Ballater Highland Games.

Mr Blackett said the only reason Captain Alwyne resigned from chiefship a year before his death was because he worried about bringing down the ‘tempo of the event’ and didn’t want to be ‘wheeled onto the field’.

He is survived by his wife Patricia, five step-children from his two marriages, his nephews and a niece.

He told The Scotsman: ‘The Chief played an important part in all of our lives and he will be dearly missed.’

Coronavirus: Scientists find how you can cut risk of catching Covid even when it’s windy
Recent Posts