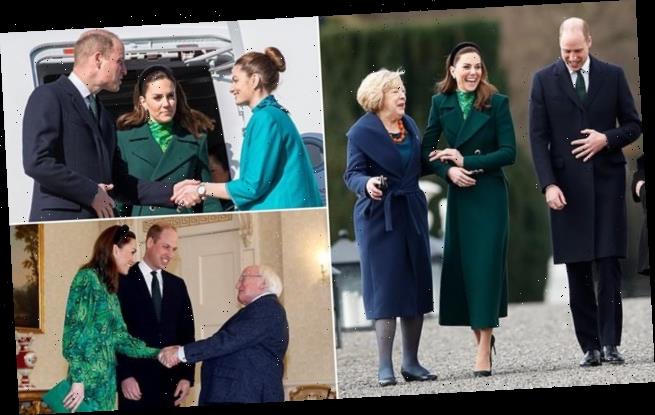 The Duke and Duchess of Cambridge are taking advice on the coronavirus threat but will continue meeting people as usual during their three-day tour of Ireland, it has emerged.

William talked about the infection as he chatted to emergency workers at a reception hosted by Britain’s Ambassador to Ireland Robin Barnett in the 17th floor Gravity Bar at Dublin’s Guinness Storehouse on Tuesday evening.

More than 92,000 coronavirus cases of the deadly virus have been recorded worldwide and at least 3,100 patients have died.

It comes after the Queen wore gloves at an investiture at Buckingham Palace earlier in the day, amid warnings about the spread of coronavirus and the deadly danger it poses to the over-80s. 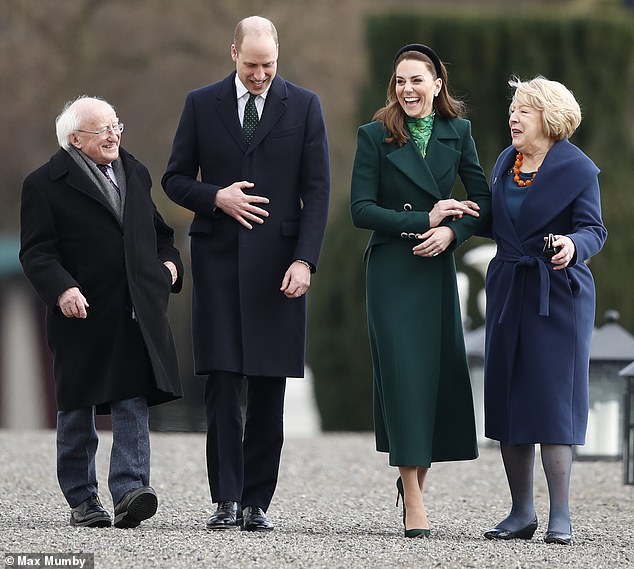 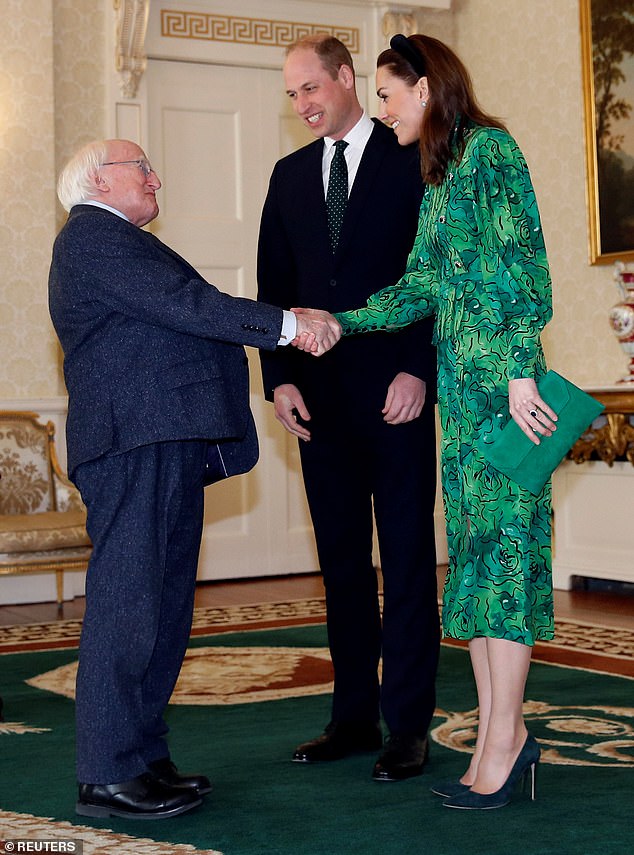 William asked Joe Mooney, an advance paramedic with the National Ambulance Service: ‘I bet everyone’s like “I’ve got coronavirus, I’m dying”, and you’re like “no, you’ve just got a cough”.

‘Does it seem quite dramatic about coronavirus at the moment? Is it being a little bit hyped up do you think in the media?’ he asked

‘By the way, the Duke and Duchess of Cambridge are spreading coronavirus!’ he grimaced in mock horror.

‘Sorry! We’re keeping an eye on that, so do tell us if we need to stop!’

The couple shook hands with dozens of people on the first day of their tour and are expected to continue to do so, based on advice they are being given.

A royal source said last night the couple were following guidance from Public Health England and the Department of Health and that meant ‘business as usual’ for now.

‘This is a discussion we have been having and everything we are doing should continue as usual,’ said the source. 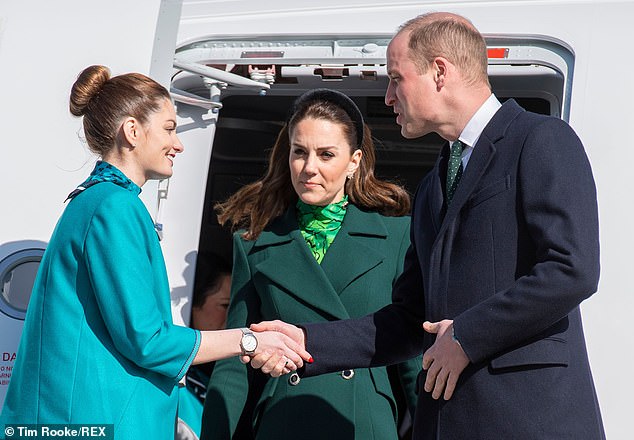 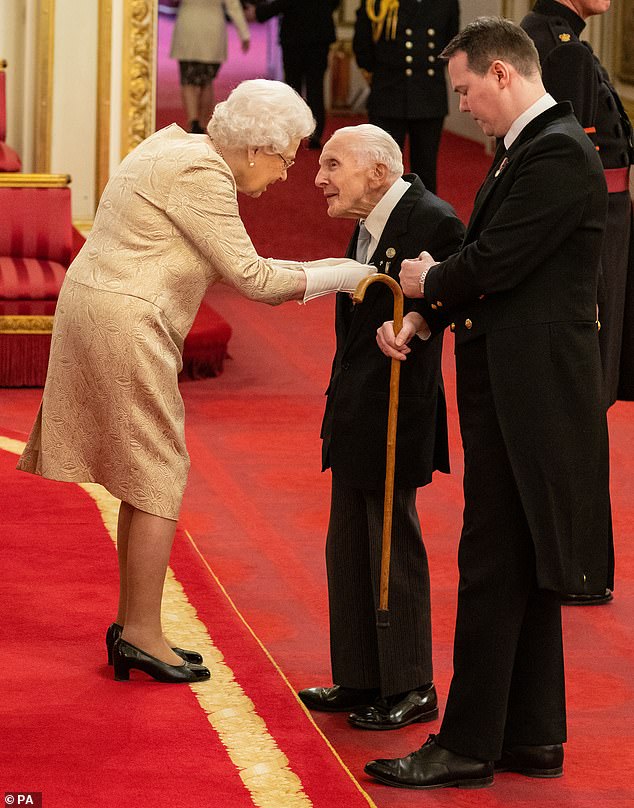 The Queen, who has carried out investitures since 1952, has worn gloves for the first time as she handed an MBE to D-Day veteran Harry Billinge today

The Queen’s decision to cover her hands to above the wrists came as the Government warned that the death rate for people infected is ‘significantly ramped up’ among the elderly. Britain was also warned that a major outbreak is ‘highly likely’.

Her Majesty wears gloves when she meets the public at events or garden parties – but not at investitures where she carries out the fiddly task of fastening the awards to a hook on the recipients’ lapels.

Today she wore them at Buckingham Palace for the first time in her reign as Boris Johnson unveiled the ‘battle plan’ to tackle a major outbreak on British soil, which could see troops deployed on streets and police told to ignore low-level crime.

William and Kate enjoyed a pint of Guinness at the historic Dublin brewery of the Irish Stout, with the Duke toasting his hosts in Gaelic, raising his pint and saying ‘Slainte’.

He also addressed the guests from the worlds of sport, film, television and the armed forces in Irish, calling them ‘dhaoine uaisle’ – ‘Ladies and Gentlemen’. 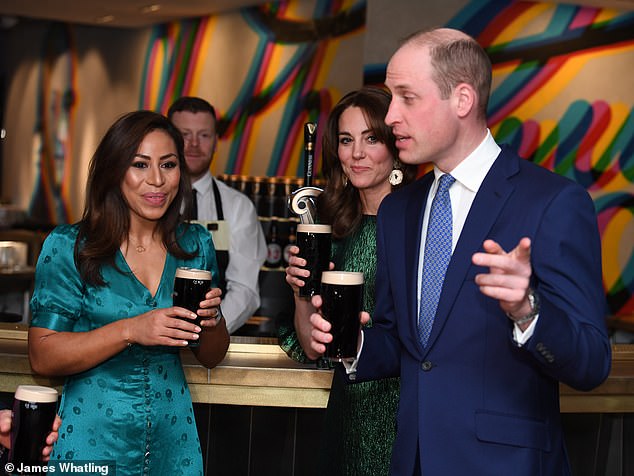 The Duke and Duchess of Cambridge attend a reception at the Guinness Storehouse’s Gravity Bar, hosted by the British Ambassador to Ireland

‘Catherine and I are delighted to be here tonight and are both very grateful to Robin for his generous words,’ said the Duke.

‘Ireland is a country that we have both heard so much about, so we are really excited to be here with you to see it first-hand for ourselves.

‘In coming to the Guinness Storehouse, we are retracing the footsteps of my grandmother, who was shown how to pour the perfect pint here in 2011.

‘Ladies and Gentlemen let me tell you it is not often that I find myself following The Queen to a pub! But I am looking forward to testing for myself the theory that Guinness tastes even better in Ireland than overseas!’

William continued: ‘Thank you for all that you do to support the very special relationship between our two countries.

‘It has been a pleasure to meet so many of you this evening who demonstrate the breadth of our connections across the arts, sports, uniformed services, education and research, and charity sectors. We value it as we do your friendship and are committed to strengthening it further.’

The Guinness Storehouse tells the story of the famous Irish tipple, from the brewing process to the brand’s history in Dublin, and is Ireland’s top international visitor attraction, welcoming 1.7million people in 2019.

Almost a quarter of visitors to the Irish capital cite the Home of Guinness as their main reason for visiting the city.