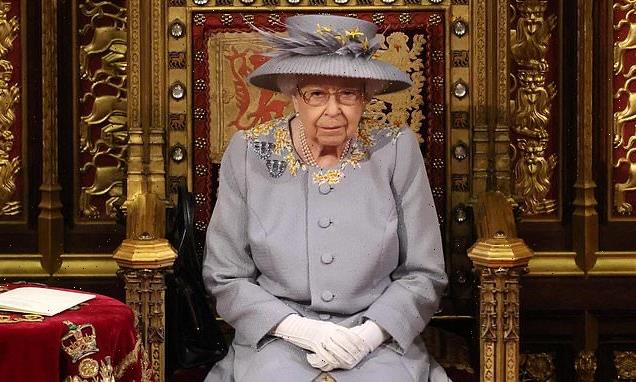 The Queen still plans to attend the State Opening of Parliament next Tuesday.

But measures are in place to minimise the distance she would have to walk.

Her Majesty will need to walk from a car to the building then through the Robing Room to the Lords Chamber.

She will then have to take three steps up to her throne, from which she delivers her speech.

Buckingham Palace has said the Queen ‘plans to attend’ but that this would be confirmed on the day.

It would be the most high-profile constitutional event she has been able to go to for two years. 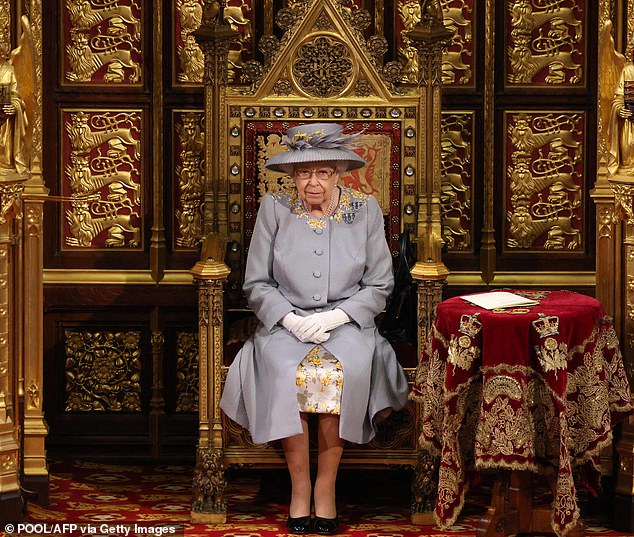 Queen Elizabeth II sits on the The Sovereign’s Throne during the State Opening of Parliament in May last year, which took place with a reduced capacity due to Covid restrictions

The 96-year-old monarch will travel by car from Buckingham Palace to Westminster on Tuesday under the current plans.

She has not used a carriage since 2019 as she finds her state limousine more comfortable.

There will also be a slimmed down – but still spectacular – military ceremony with fewer troops but the same standards of pomp and military splendour involving eight different units, including The King’s Troop Royal Horse Artillery and The Household Cavalry Mounted Regiment.

As the Queen’s car leaves the palace a royal salute will take place and the National Anthem will be played.

She no longer wears her Imperial Crown or Robes of State given their weight and awkwardness and instead wears smart day dress.

In 2016 the Queen used a lift rather than the stairs for the State Opening of Parliament for the first time in 64 years.

The State Opening of Parliament is one of the monarch’s most significant public duties, and involves the reading of the Queen’s Speech outlining the government’s policies and proposed legislation for the new parliamentary session.