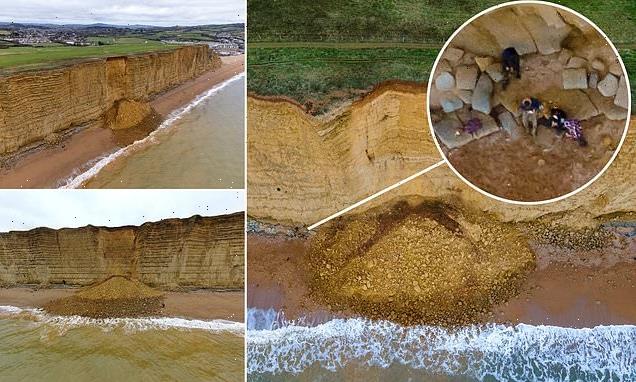 Reckless tourists risk their lives at the bottom of crumbling cliffs

Five reckless tourists risked their lives as they sat at the bottom of crumbling cliffs just says after a pile of rocks collapsed.

The group were caught, on a drone camera, resting against the foot of the notoriously fragile sandstone cliffs at West Bay, Dorset, on Saturday afternoon.

They are dwarfed by the 500 tonnes of rock, rubble and mud that, last Sunday, had dramatically slipped from the 120ft cliffs that featured in TV crime drama Broadchurch.

Coastguards had warned people to keep away from the area, saying more rockfalls could happen at any time without warning.

But that did not stop the five visitors and their dog from walking right up to the 40ft mound.

Video shows one of them climbing over the massive pile before three of them take a rest on boulders right up against the cliff face. 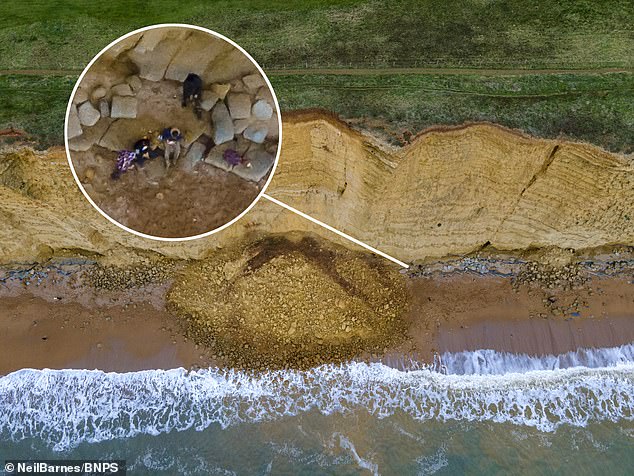 Five reckless tourists were caught, on a drone camera, resting against the foot of the notoriously fragile sandstone cliffs at West Bay, Dorset, on Saturday afternoon

A spokesman for West Bay coastguards said the group had risked their lives.

He said: ‘The cliffs all along the Jurassic Coast suffer from constant erosion – the one at the ‘Broadchurch’ cliffs wasn’t the only rockfall reported last week.

‘As soon as the weather changes, it can affect the material in the cliff.

‘When one section of it crumbles, there is considerable uncertainty about whether another will follow shortly after.

‘We advise the public to stay as far away as possible when there is the possibility of this danger.

‘We often put up temporary warning signs and people should adhere to them.

‘The cliff could fall at any time and there’s no escaping from the hundreds of tonnes of rock.’

Footage filmed last Sunday shows the moment the 500 tonnes of cliff crashes down onto the beach below.

A massive amount of debris comes down and lands in the sea and leaves a cloud of rock, rubble and mud.

West Bay was made famous for featuring prominently in ITV’s hit crime drama Broadchurch and has become a favourite spot for tourists.

But it is infamous for its fragile cliffs and landslip occur there regularly.

In 2012, tragic tourist Charlotte Blackman, 22, was killed in a rockfall along the same stretch of the Jurassic Coast.

The latest is one of several cliff falls along the West Bay area this year.

A woman was taken to hospital in May after she was hit by falling debris while walking along the beach and a huge landslip occurred slightly further along the coast at Seatown in August.