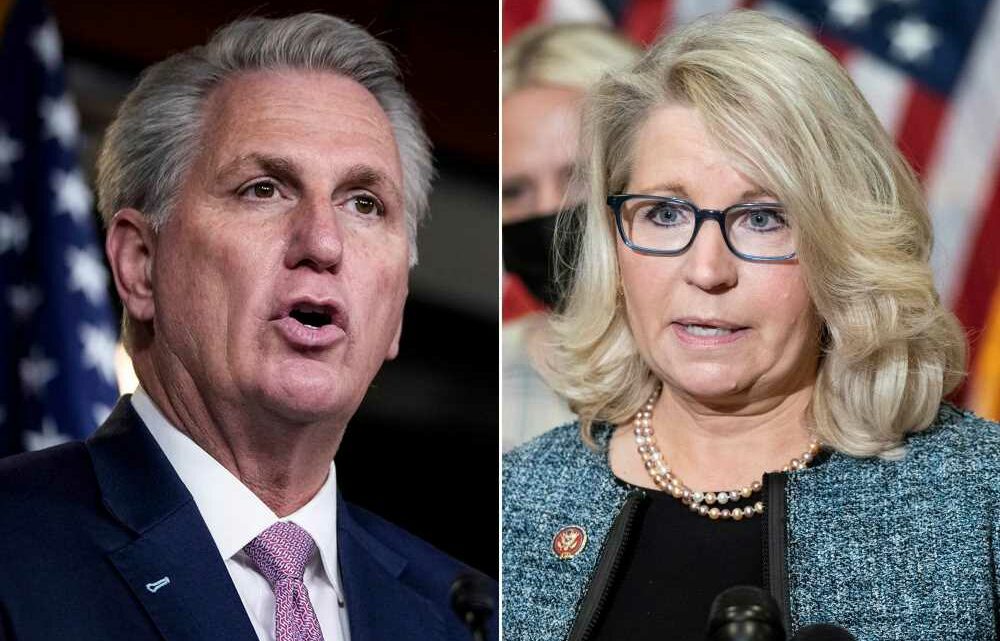 There’s no stopping the GOP’s divorce from big business

House Minority Leader Kevin McCarthy is taking aim at the No. 3 Republican in the House, Rep. Liz Cheney, publicly questioning her ability to play a leading role in the party’s messaging efforts and privately stating that he’s “had it with her.”

McCarthy (R-Calif.) was caught on a hot mic Tuesday stating, “I think she’s got real problems. I’ve had it with … I’ve had it with her. You know, I’ve lost confidence. … Well, someone just has to bring a motion, but I assume that will probably take place,” while speaking with Fox News anchor Steve Doocey off camera, Axios first reported.

His comments come as Cheney (R-Wyo.) faces renewed calls for her ouster from leadership, with the pro-Trump faction of the party calling for a second vote for her removal, citing her criticisms of former President Donald Trump.

During his Tuesday morning appearance on “Fox & Friends,” McCarthy was more measured in his criticisms of his fellow Republican, taking aim at her leadership style.

“We all need to be working as one if we’re able to win the majority. Remember, majorities are not given, they are earned. And that’s about the message about going forward.”

While Cheney is facing an influx of backlash from her GOP colleagues for continuing to speak out against Trump, she is not backing down.

Sources close to Cheney argue she is working to tell Americans the truth about the election, with one GOP lawmaker stating she is fighting for the “soul of the party.”

“This is about whether the Republican Party is going to perpetuate lies about the 2020 election and attempt to whitewash what happened on Jan 6. Liz will not do that. That is the issue,” Cheney spokesman Jeremy Adler said in a statement in response to McCarthy’s remarks on Fox.

While Cheney overwhelmingly prevailed in a vote to remove her as House Republican Conference chair — a position tasked with helping lead messaging efforts — multiple GOP lawmakers said this push feels different, with several casting doubt on her ability to retain the support of the majority of the conference.

Renewed tensions appear to have started to reach a boiling point during the House GOP retreat in Orlando, where Cheney broke with McCarthy on the scope of what the Jan. 6 commission should explore, said Trump should not be the face of the party, and said during a string of media interviews that anyone who led the efforts to object to the certification of the election should be disqualified from being the 2024 GOP nominee — not ruling out the possibility of a White House bid herself.

Her critics argue that her criticisms of Trump and split with other members of party leadership hinder her ability to do her job, with some arguing she isn’t in touch with the Republican base.

”Everyone has had it,” one lawmaker told The Post. “She’s toast.”

Another GOP member told The Post they expect a vote could happen as soon as next Wednesday, when House Republicans are expected to convene for their first conference meeting after their two-week recess.

And while Cheney allies remain, some Republican lawmakers have already begun jockeying for her post, with two members telling The Post that Reps. Jackie Walorski (R-Ind.) and Elise Stefanik (R-N.Y.) have expressed interest in the role.

GOP lawmakers said in the event that Cheney is ousted, there is some concern over the optics of removing the most powerful woman in Republican leadership, with several senior sources stating they believe another woman would likely be tapped to take her place.

“Well, it has to be a woman if it’s not Waloriski, Elise, and a name that hasn’t gotten any attention that I really like is Debbie Lesko [R-Ariz.], who could bridge the gap,” one member told The Post.

“And then you’ve got to go pretty deep into the new freshman class and find somebody. It’s gonna be somebody in the middle, they can bridge the gap between conservatives and moderates.”