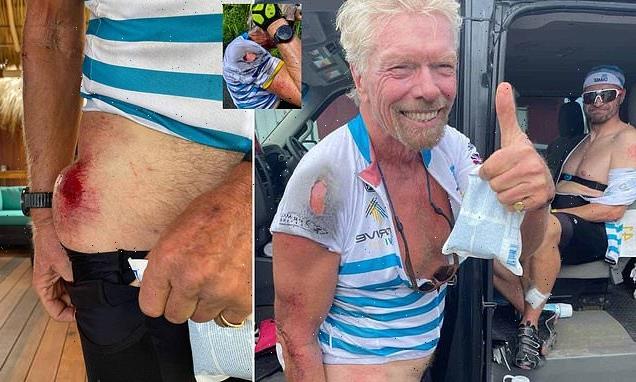 Richard Branson, 71, shows off gruesome injuries from ‘colossal cycling crash’ and reveals his helmet saved his life after his brakes failed on steep hill during BVI charity bike ride

Sir Richard Branson has suffered a ‘colossal’ bicycle crash after his brakes failed while taking part in an endurance charity race across the British Virgin Islands this week.

The 71-year-old billionaire feared he had broken his back after colliding with another rider during day two of the Strive BVI event – which sees fitness fanatics complete a series of gruelling water and land-based challenges over the course of several days.

The Virgin founder said he had to be treated for severe cuts and bruises on his elbow, an ‘extraordinarily big bump’ on his hip and a ‘massive’ hematoma on his leg after flying off his bike and crashing onto the hard concrete road on the island of Tortola.

In a blog post on his Virgin website on Wednesday, the father-of-three said there was ‘no question’ that wearing a helmet saved his life.

He wrote: ‘I was navigating a steep corner, with a massive cliff drop to my left, a car coming up the hill, and my fellow Striver, Felix Stellmaszek, in front of me passing the car.

‘I pulled on both of my brakes, but they didn’t respond. 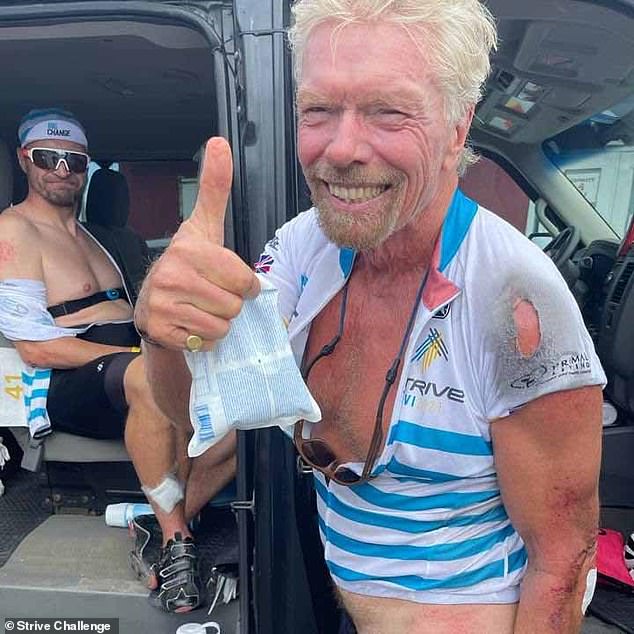 British billionaire Sir Richard Branson, 71, suffered a ‘colossal’ bike crash during a charity event on the British Virgin Islands (Pictured: Sir Richard gives thumbs up as he gets in van to be taken to hospital) 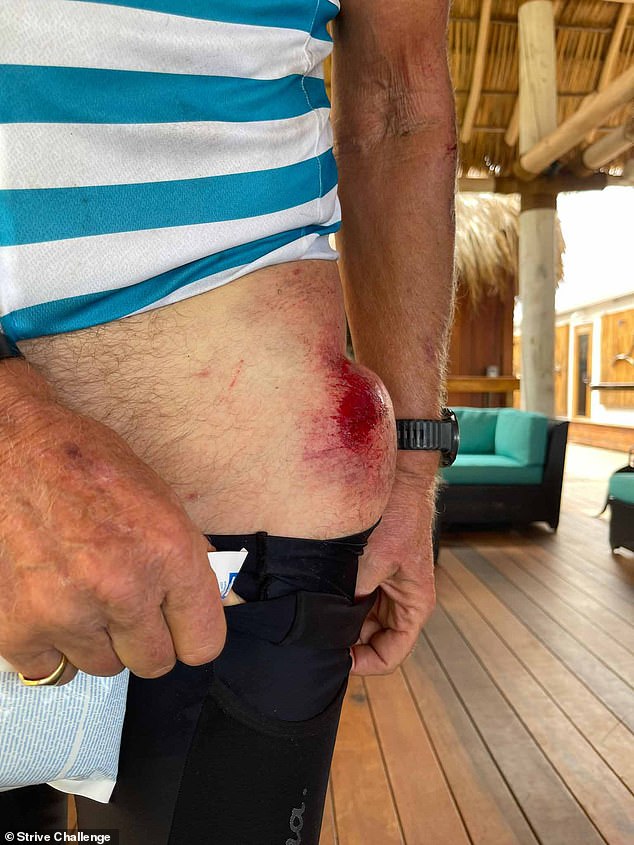 The Virgin founder said he had to be treated for severe cuts and bruises on his elbow, an ‘extraordinarily big bump’ on his hip (pictured) and a ‘massive’ hematoma on his leg after flying off his bike and crashing onto the hard concrete road on the island of Tortola

‘I was going faster and faster, with my options being to drop off the cliff, hit the car, or potentially run into Felix.’

He said he pulled on his brakes as tight as he could but they ‘didn’t respond’.

He added: ‘I cried out to Felix a warning – “brakes not working!” – but he had no chance of getting out of the way. We crashed – hard.

‘We both fell off our bikes and our heads and bodies slammed into the concrete road.

‘There is no question that wearing helmets saved our lives – not the first time that has been the case.

‘We both lay flat out on the road as the rest of the team gathered around us.

‘I stayed still, hoping I hadn’t broken my back or paralysed myself. Slowly, I moved my limbs and was relieved they responded.’

Both men were taken to Virgin Gorda hospital where they were treated for their injuries.

The Strive BVI is described as a ‘multi-discipline challenge fundraising event across the British Virgin Islands entirely under human and sail power.’

It occurs each year and raises funds for Big Change, a charity founded by Sir Richard’s children Holly and Sam.

Sir Richard had enjoyed sailing, kayaking and paddleboarding around Anegada during the challenge’s first day. 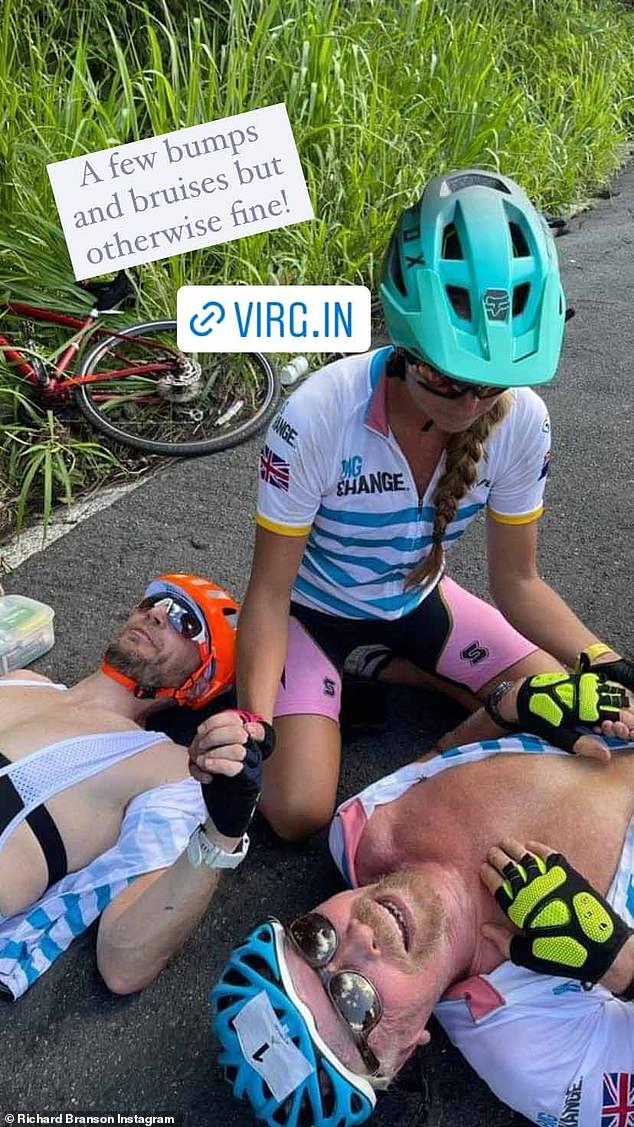 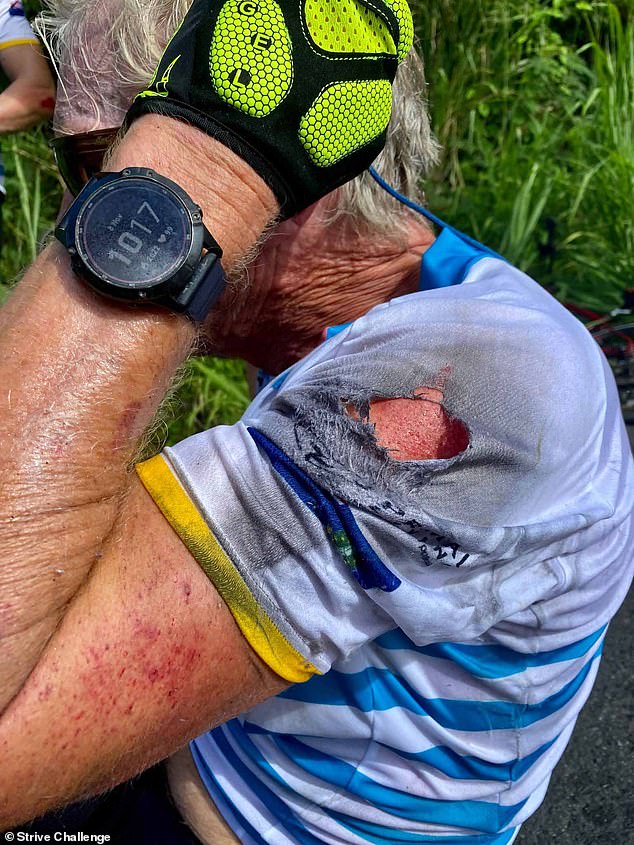 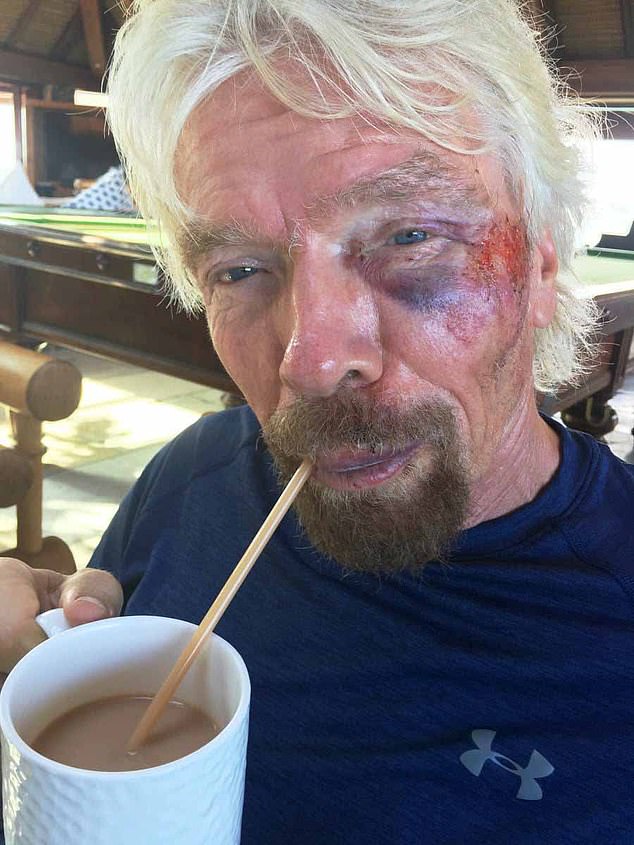 On day two, the day of the crash, the entrepreneur had already endured a punishing 60km bike ride around the rolling hills of Tortola, before agreeing to do an extra 10km.

It was on his return down a steep winding road that the crash happened.

There are still hiking, swimming and sailing events planned for later this week, although it’s not known if Sir Richard will be taking part.

Sir Richard added: ‘Thanks so much to the medical team who helped us.

‘I’ve got some severe cuts and bruises on my elbow, an extraordinarily big bump on my hip and a massive hematoma on my leg. But it could have been so much worse.’

It’s not the first time the business mogul has been injured on his bike in the Virgin Islands.

In 2016,  he cracked his cheek and tore several ligaments while riding in the Virgin Strive challenge in Leverick Bay.

He said at the time: ‘I really thought I was going to die.

‘I went flying head-first towards the concrete road, but fortunately my shoulder and cheek took the brunt of the impact, and I was wearing a helmet that saved my life.’