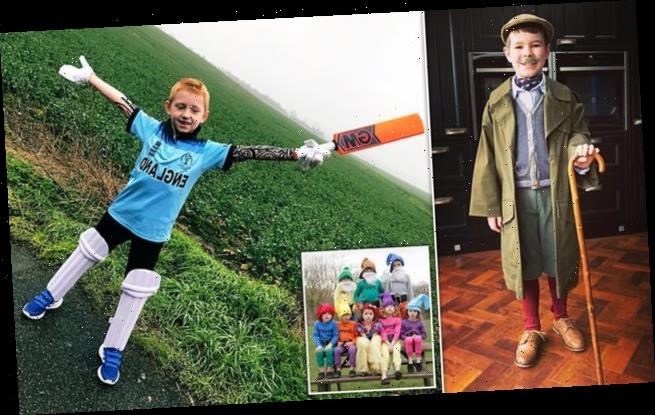 Roald Dahl, Harry Potter and even Ben Stokes provide World Book Day inspiration while two sets of triplets and two twins team up as Snow White and the Seven Dwarfs

Millions of children across the world will be celebrating World Book Day today, with many arriving at schools all over the UK in costumes resembling their favourite characters from Roald Dahl’s the Duke of Hampshire to Disney classic Snow White and the Seven Dwarfs.

World Book Day is usually held on the first Thursday in March and as well as experimenting with their dressing up box, children will receive National Book Tokens that they can redeem on a selection of books, or to get money off others.

Cricketer Ben Stokes also provided inspiration today with one youngster imitating the book cover of his 2019 book ‘On Fire: My Story of England’s Summer to Remember.’

As children don their best fancy dress, it was today revealed that fewer children and young people are reading daily and enjoying reading than ever before.

In 2019 only 25.8 per cent of children said they read in their free time – the lowest level recorded since 2005, the National Literary Trust says.

Throughout the day authors will visit schools up and down the country to promote books and reading alike. 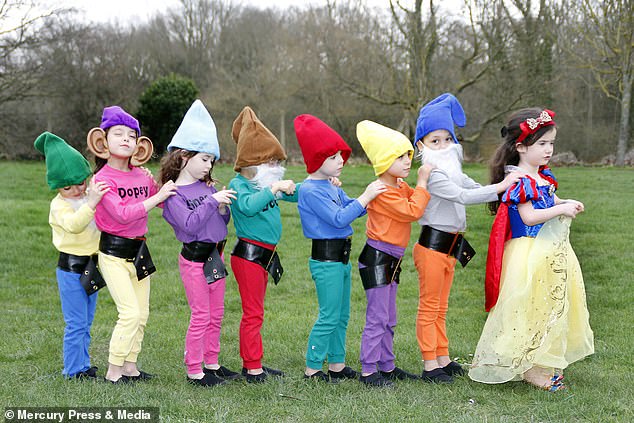 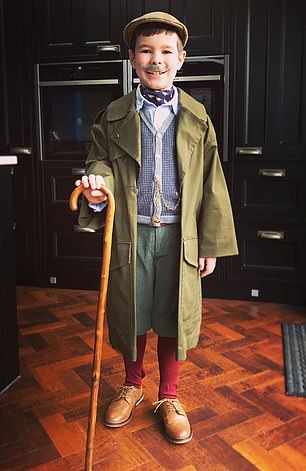 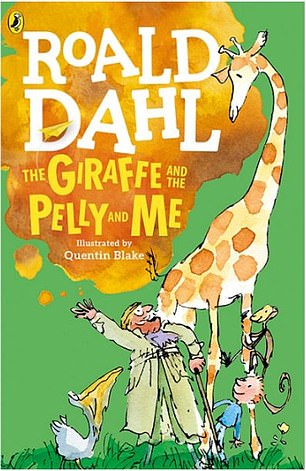 Little Michael Osmond (left) aged eight, today dressed up as the Duke of Hampshire from Roald Dahl’s The Giraffe and the Pelly and Me 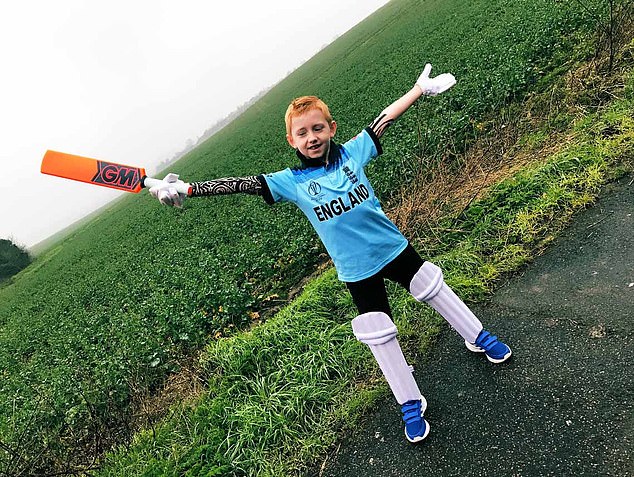 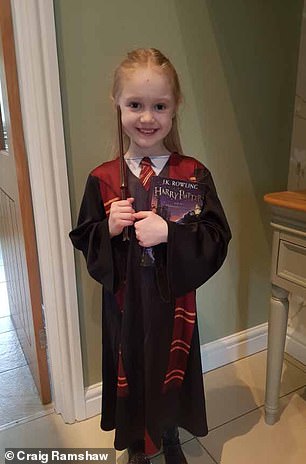 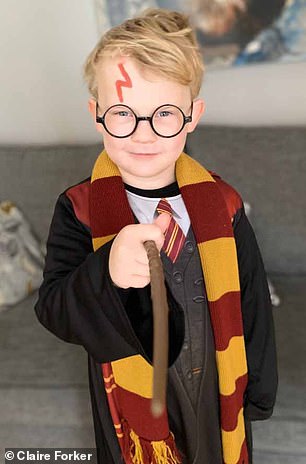 Today a group of friends at one school in Essex stunned their school mates when they turned up dressed as the characters from Snow White and the Seven Dwarfs.

Triplet brothers Kuzey, Koray and Ayaz Cerikci, all five, struck up a bond with five-year-old triplet sisters Isabella, Sophia-Lorenza and Celestina Smith and twin brothers Bobby and Freddie Cornett, four, last September when the youngsters all enrolled in the same reception class – despite there only being 103 children in the whole school.

Sue Dodd, headteacher at Woodham Walter Primary School, said: ‘We are in the unusual position of having two sets of triplets and a set of twins in a very small class.

‘They are all delightful children, as are the rest of the cohort.

‘Reading is a strength of our school and this term the children have taken part in World Book Day.

‘The triplets and twins love books and relish any opportunity to dress up as their favourite characters.

‘It was lovely seeing them beginning their reading journey with so much enthusiasm and excitement.’

In Ellesmere Port, Cheshire, eight-year-old Noa and her brother River Dowling, six, dressed as the Lorax and the Grinch today as their school had a Dr Seuss theme. 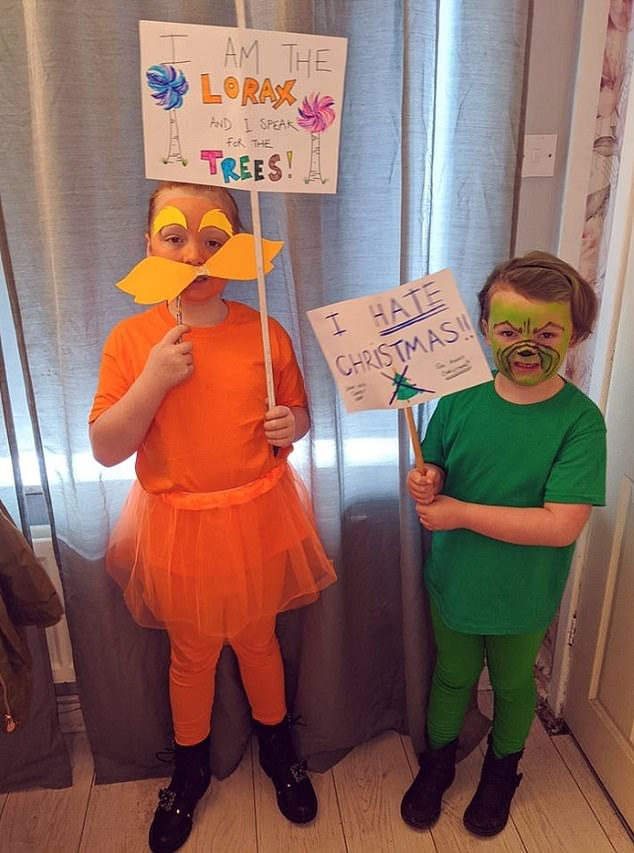 Eight-year-old Noa (left) and her brother River, six, (right) dressed as the Lorax and the Grinch today as their school in Ellesmere Port, Cheshire, had a Dr Seuss theme 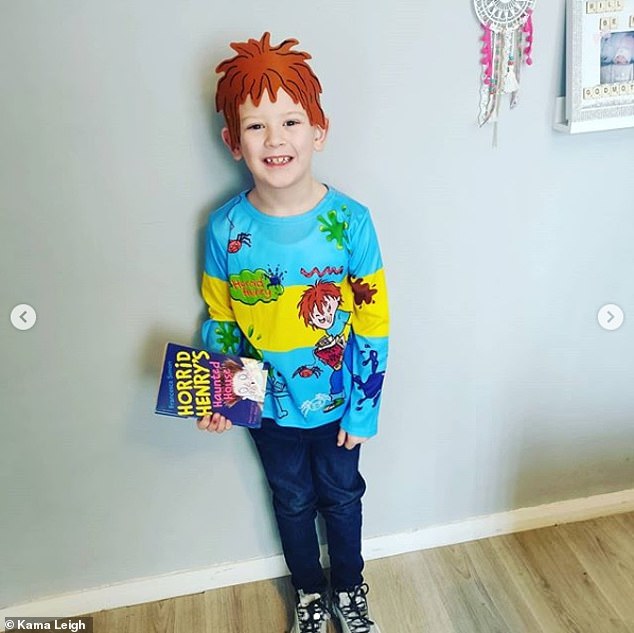 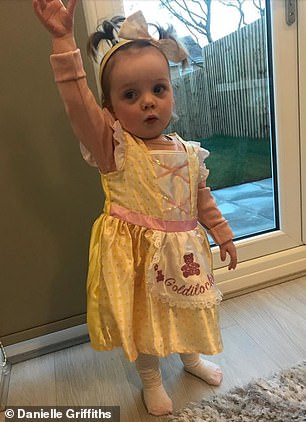 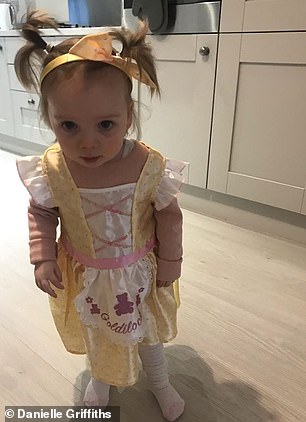 Noa wore all orange with a tutu, while River wore all green and had his face painted.

This is while another youngster, Harley, looked super cool this morning when he dressed up as Horrid Henry.

17-month-old Jessica also got in the spirit of things and dressed in an adorable Goldilocks outfit this morning.

2020 marks the 23rd year that there has been a World Book Day and the celebration is marked all over the world.

It’s a celebration of reading and the writing and illustrators who help the stories come to life.

World Book Day was first created on 23 April 1995 by UNESCO in order to help young people discover the pleasure of reading.

In the UK and Ireland, the first World Book Day was celebrated in 1997 to promote reading for fun. 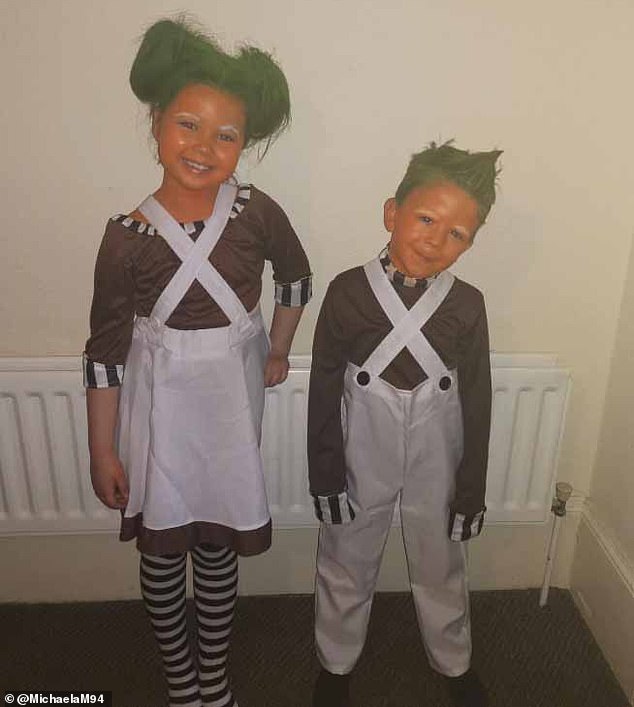 Oompa loompa doompety doo I’ve got a perfect puzzle for you: These two youngsters took inspiration from Charlie and the Chocolate Factory 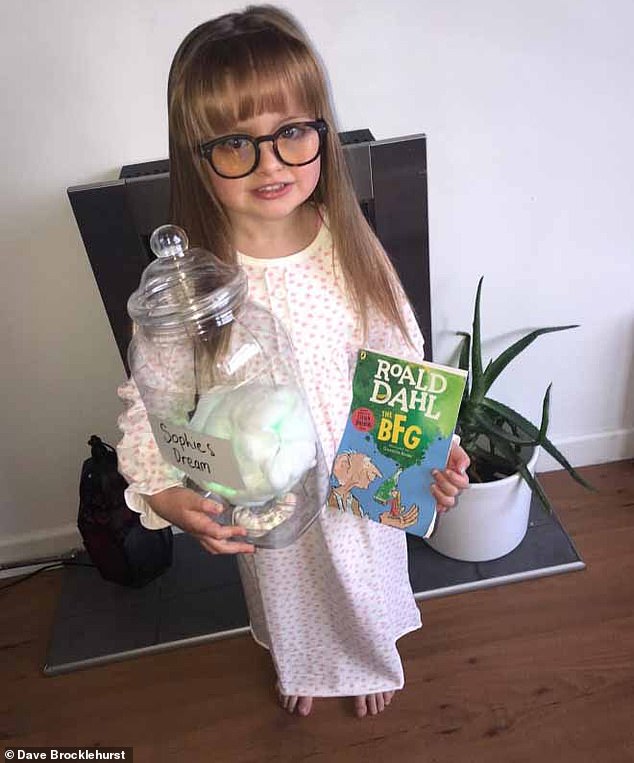 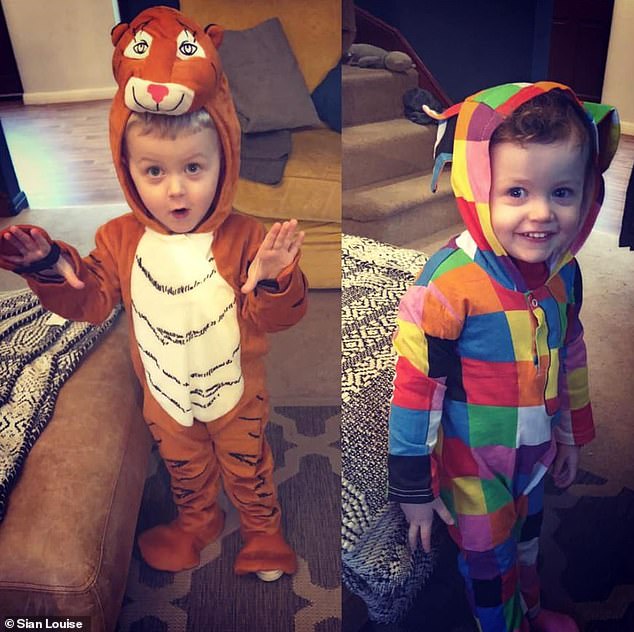 Mother Sian Hewitt is proud of Joshua, 3 (The Tiger Who Came To Tea) and Nancy, 2 (My Little Elmer) 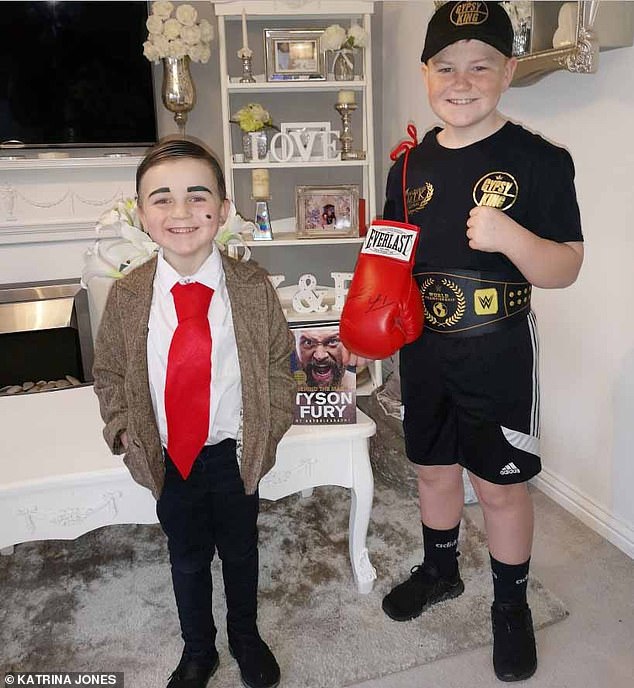 Its founder, Baroness Gail Rebuck said : ‘We wanted to do something to reposition reading and our message is the same today as it was then – that reading is fun, relevant, accessible, exciting, and has the power to transform lives.’

The charity behind World Book Day is also encouraging people to help a nationwide effort to ‘share a million stories’.

The challenge involves reading or being read to for at least ten minutes, with every person who hears the story counting towards the one million target.

At the beginning of World Book Day more than 180,000 stories have already been ‘shared’ as part of the campaign, which began on February 27 and runs until March 29.

Cassie Chadderton, chief executive of World Book Day, said: ‘Year on year, the evidence grows that World Book Day is having a positive impact on the reading behaviour of our children and young people.

‘By putting more books directly into the hands of children and young people and, at the same time, encouraging everyone, everywhere to get into the habit of sharing stories regularly, World Book Day is helping create readers for life.’

Famed for her youthful looks, the Heart Radio presenter paid tribute to evergreen children’s character Peter Pan by dressing up as Tinker Bell.

Sporting the character’s lime-green outfit and fairy wings, Amanda struck a pose after making her way into the radio station’s central London studio. 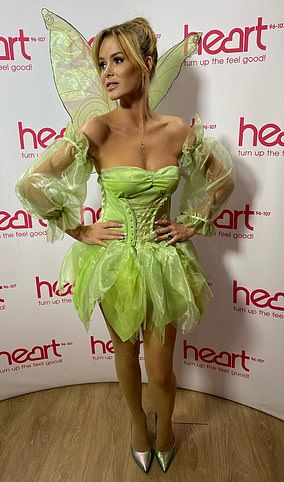 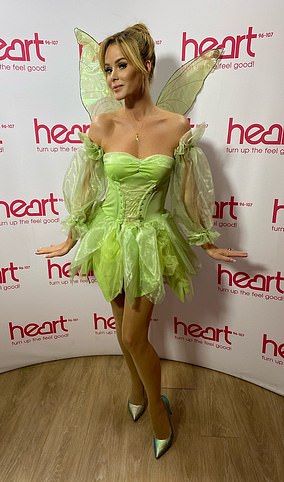 Make me a wish: Amanda Holden led the way on Thursday morning as celebrities celebrated World Book Day by dressing up as fairy Tinker Bell from J.M Barrie’s Peter Pan

Rochelle and Marvin Humes’ children Alaia-Mai, six, and Valentina, two, also joined in the fun by pulling on costumes dedicated to their favourite characters.

Elsewhere Loose Women star Stacey Solomon ensured son Leighton celebrated World Book Day by dressing him up as one of one of English fiction’s most iconic creations.

Taking to Instagram, Stacey, 30, shared a snap of her second son clad in a Harry Potter cape and spectacles, and effect created with a special filter. 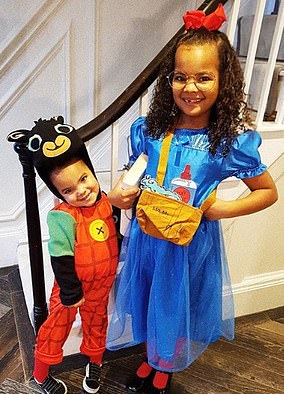 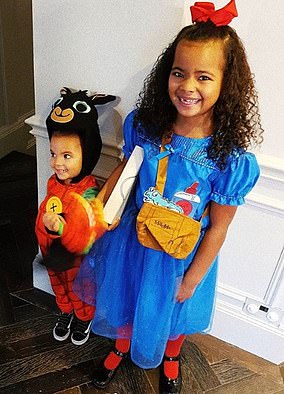 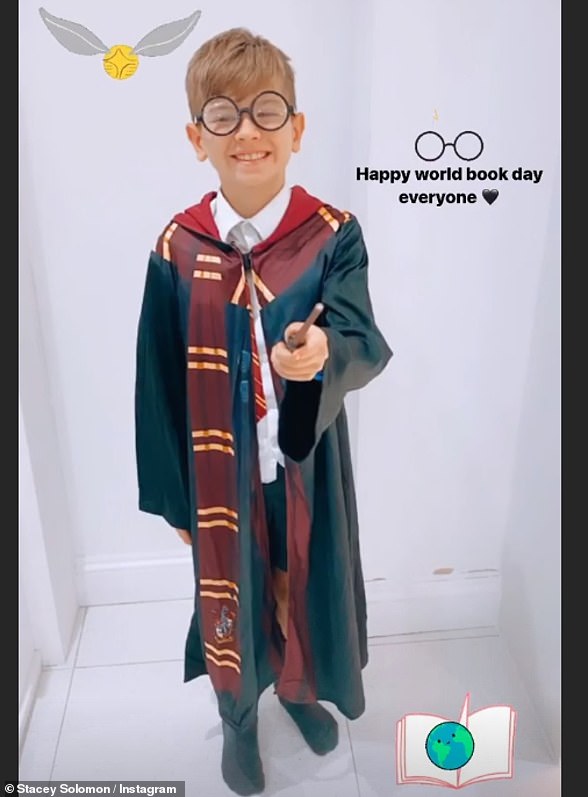 He’ll cast a spell on you: Elsewhere Loose Women star Stacey Solomon ensured son Leighton celebrated World Book Day by dressing him up as one of one of English fiction’s most iconic creations, Harry Potter 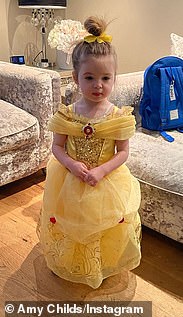 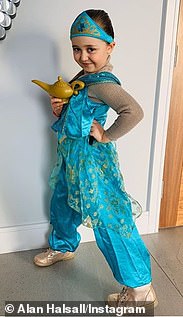 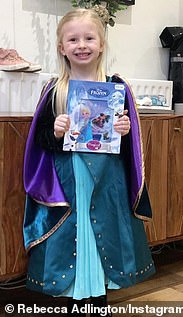