London: Kevin Rudd has been overheard in Switzerland saying he was going to “shut the f— up” because he had been appointed Australia’s ambassador to the United States.

The outspoken former leader also quipped about being slowly demoted, having been prime minister, foreign minister and now being appointed as the envoy to Washington. 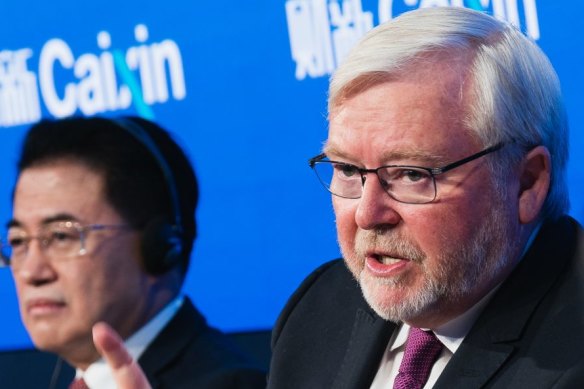 Rudd attended the World Economic Forum in the Swiss ski resort town of Davos this week. The forum assembles the globe’s private and public elite annually. Among the speakers this year were also Christine Lagarde, President of the European Central Bank, British adman Martin Sorrell and climate activist Greta Thunberg.

He was then reported by Politico as saying: “I’ve been appointed ambassador so I’m going to shut the f— up”, then observing: “I’m slowly being demoted. I was prime minister, then foreign minister and now I’m ambassador.”

A source close to Rudd couldn’t confirm the hearsay, but said they wouldn’t be surprised if the self-deprecating Australian humour had gone over the heads of eavesdropping foreign journalists.

The anecdote was reported by Politico in its Davos diary entries on Friday under the heading “overheard”. The entries were edited by Australian-born journalist Ryan Heath.

Heath is a stalwart of the Davos scene and previously served as spokesperson for the European Commission’s then vice president Neelie Kroes.He worked on the political campaign of Rudd’s first environment minister Peter Garrett.

It is not the first time Rudd has been quoted using profanities. In 2010, journalist David Marr reported in the Quarterly Essay Power Trip: The political journey of Kevin Rudd that the then prime minister had briefed that the Chinese “fu—rs” were trying to “rat f–k” the Copenhagen climate talks.

Several years later, a video of the then-prime minister was leaked showing him swearing about the complicated nature of the Chinese language while trying to record a message in Mandarin, in which he is fluent.

Rudd is expected to take on Australia’s top job in Washington in March although Prime Minister Anthony Albanese, who made the appointment, said an exact date had not yet been set.

Many of Albanese’s cabinet and caucus colleagues are privately concerned that Rudd’s chaotic governing style in office will become a feature of his tenure in Washington.

But Albanese has said Rudd’s experience in office is part of what makes him qualified for the role.

Asked on Monday if he was concerned about Rudd opining on issues like China ahead of rejoining the diplomatic corps, Albanese told Sky: “Kevin Rudd is fully aware of the responsibilities that he has. And he will fulfil them.”

“Kevin Rudd will bring to the US ambassadorship a great deal of experience and, of course, knowledge in international affairs, not just as a former prime minister, but a former foreign minister, and the current head of the Asia Society,” Albanese. The Asia Society is a not-for profit with offices in New York and London.

“And that is the job he’s doing for the moment. We haven’t finalised a date.”

20 Days in Mariupol Review: An Unflinching Look at the True Price of Russias War on Ukraine