Home » World News » ‘Russia can be defeated’: Ukraine tries to make the case that it can win the war

‘Russia can be defeated’: Ukraine tries to make the case that it can win the war

Kyiv: Just weeks ago, Ukraine’s military was being pummeled relentlessly in the east, taking heavy casualties as it slowly gave ground to the Russian advance. Western support appeared to be softening amid scepticism that Ukraine could win a war of attrition or that an influx of sophisticated weapons would turn the tide.

Through it all, the Ukrainians’ message to the world did not change: We can win. Our strategy is working, if slowly. Just keep the weapons coming. 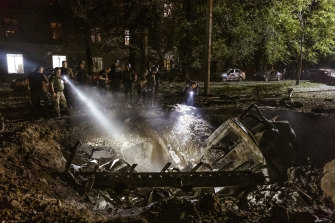 No one can say yet whether Ukraine might prevail against an invading Russian military with superior numbers and weaponry — or even what winning might look like. And Ukraine’s pleas for weapons have become such a constant refrain that some in the West have tuned it out as unrealistic background noise.

But this week, as it employs new long-range rocket systems to destroy Russian infrastructure, Ukraine is again trying to make its case to the world that it can defeat the Russians. And it is citing evidence.

Officials are pointing to successes like a recent strike in the town of Nova Kakhovka, on the Dnieper River in southern Ukraine, when Western-supplied High Mobility Artillery Rocket Systems, or HIMARS, hit a Russian ammunition depot, sending sparkling munitions flying in all directions like a lethal fireworks display.

Several days ago, a Ukrainian artillery volley struck a key bridge on the Dnieper that was a critical crossing point for Russian supplies. Analysts say the strike augurs the start of a counteroffensive in the south, with an eye toward recapturing the key city of Kherson. 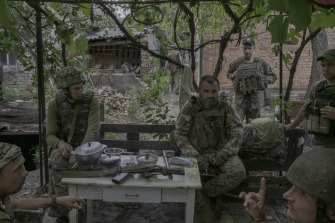 Ukrainian soldiers listen to the whir of a rocket nearby at a frontline position in the Donetsk region of eastern Ukraine.Credit:Mauricio Lima/The New York Times

On Thursday, Ukrainian officials said their forces had attacked more than 200 targets in the south using long-range missiles and artillery.

“Russia can definitely be defeated, and Ukraine has already shown how,” Ukrainian Defence Minister Oleksii Reznikov said in a speech to the Atlantic Council on Tuesday.

Ukrainian first lady Olena Zelenska carried the message personally to Washington on Wednesday, making a rare appearance before Congress by a foreign first spouse. She pleaded for more weapons, saying Russia was “destroying our country.″⁣

Despite the Ukrainians’ renewed optimism, military analysts and Western officials say that it’s far too soon to forecast a turn in fortunes and that a long slog seems likely. They caution against hanging too many hopes on particular weapons amid the chaos and fluidity of a front line that winds hundreds of miles from Kharkiv in the north to Mykolaiv in the south.

“We are now achieving what we have not achieved before,” said Taras Chmut, director of a nongovernmental group aiding Ukrainian soldiers. “But there was no breakthrough at the front. There is no panacea, no magic wand, that will lead to victory tomorrow.”

“The faster our partners supply us with weapons, the faster we will end this war,” said Oleksiy Danilov, head of Ukraine’s national security council. Ukraine has no intention of ceding territory in a negotiated settlement, as some in the West have suggested, he said. “This is just a question of who beats whom.”

Ukraine received affirmation of its strategy from the United States on Wednesday, when the Pentagon committed to supplying four more HIMARS rocket launchers and other potent weaponry, including two NASAMS air-defense systems to help Ukraine protect against missile strikes. And Defence Secretary Lloyd Austin offered a more optimistic assessment of Ukraine’s chances 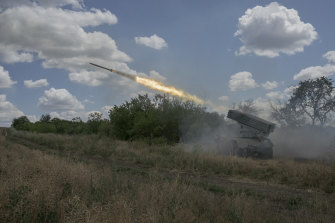 “Our assistance is making a real difference on the ground,” Austin told a gathering of Western defence officials. “Russia thinks that it can outlast Ukraine — and outlast us. But that’s just the latest in Russia’s string of miscalculations.”

Britain’s top intelligence officer, Richard Moore, head of MI6, also provided an optimistic assessment, saying of Russia’s military “I think they are about to run out of steam.” Moore said Russian forces “will have to pause in some way, and that will give Ukrainians opportunities to strike back.”

Away from the battlefield, Ukraine got renewed economic support from the European Union, which is proposing that members reduce their gas consumption, fearing that President Vladimir Putin will cut off Russia’s gas exports to them. On Thursday, Russia resumed the flow of gas through a vital pipeline to Germany, easing fears of shortages, at least for the moment.

A month ago, it looked like Russia had a significant upper hand. Ukrainian soldiers fought fierce, bloody and ultimately losing street battles and artillery duels for the cities of Sievierodonetsk and Lysychansk in eastern Ukraine. Some Western officials questioned the wisdom of such a scorched-earth approach, saying Ukraine could not win a war of attrition.

Even President Volodymyr Zelenskyy, in a rare public rumination over strategy, acknowledged the high costs in lives of trying to hold ground against the brunt of Russia’s army in the mostly deserted, destroyed communities, which he called “dead cities,” saying 60 to 100 Ukrainian soldiers were dying each day. Other Ukrainian officials put the toll higher.

Ukrainian commanders said drawing out the phase of urban combat inflicted more casualties on the Russians than Ukrainians. Reznikov, the Ukrainian defence minister, said that 9,000 to 11,000 Russian troops were killed in the fighting there, which he said justified the Ukrainian tactics. (His claim could not be independently verified).

The intensity of the fighting has diminished in the Donbas since Sievierodonetsk fell and the Ukrainians withdrew from Lysychansk, suggesting the Russians were either pausing to reposition or that their capabilities were significantly degraded. Attention has shifted south and west to the area near the Dnieper River, where Ukraine has made use of long-range artillery supplied by Western countries including the United States to strike targets deeper behind the front lines.

As it steps up attacks in the south, Ukraine is confronting another strategic quandary: how it should use its new, lethal capabilities. Concentrate firepower to defend in the east or attack toward the occupied southern city of Kherson, which is held by Russians but seen as vulnerable?

“Strategy is about choices, and choices come with trade-offs,” said Michael Kofman, director of Russian studies at CNA, a research institute in Arlington, Virginia.

Western officials understand Ukraine’s desire to reclaim territory and deliver a victory that will give hope to its people. But some Western officials fear its military is not ready for a major counteroffensive in the region near Kherson.

Ukraine counters that it has avoided hasty or risky maneuvers with the new weaponry and will not move prematurely.

“We understand we do not have enough resources now to take an active strategy,” said Brigadier General Oleksandr Kyrylenko, deputy chief of staff of the Ukrainian armed forces. “We are working with our partners. When we have enough, we will decide on future actions.”

Defeating the Russian army remains within Kyiv’s reach now but not indefinitely as Western support rides on signs Ukraine can liberate occupied areas, said Evelyn Farkas, director of the McCain Institute and a former deputy assistant secretary of defence for Russia, Ukraine and Eurasia.

“It’s not enough for them to hold back the Russians,” Farkas said. “If the Ukrainians cannot show some battlefield success, and the more dramatic the better, U.S. and European support for the war effort will weaken.”

Vladimir Putin is 'running out of steam' in Ukraine, head of MI6 says

Wearing a skirt made me feel like Brad Pitt, until the wind changed
Recent Posts