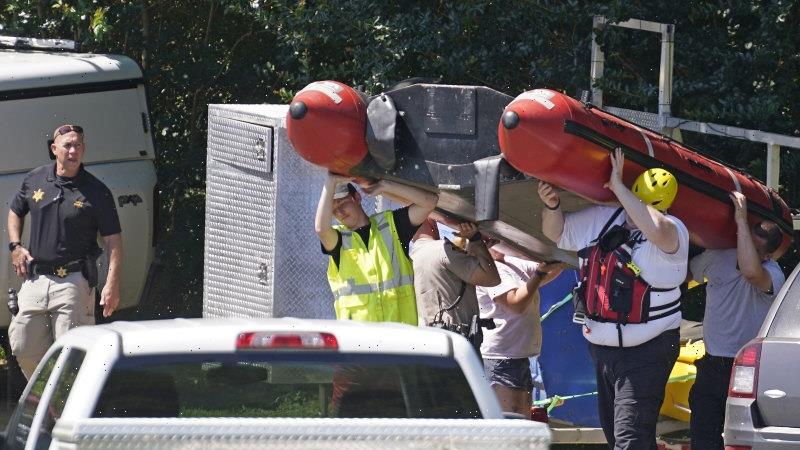 Searchers combed a North Carolina river Friday for two missing tubers after a family on a recreational float went over a dam, resulting in three deaths and the rescue of four people from the water.

The group of nine, all believed to be part of the same family, was floating down the Dan River on inflatable tubes and went over a dam that’s about 2.5 metres high next to a Duke Energy plant on Wednesday night, Rockingham County Emergency Services Director Rodney Cates told reporters.

A Duke Energy employee who saw some of the tubers called 911 on Thursday afternoon, and four were rescued that day. Three tubers’ bodies were also found on Thursday. 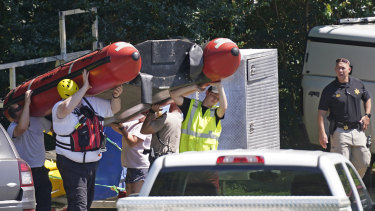 Rescue personnel prepare to search for the missing tubers. Credit:

Cates said that the rescued tubers spent the night floating in the water near the dam before they were found clinging to the tubes. He said they managed to stay afloat for approximately 19 hours, describing them as “very, very fatigued” when they were found. The four were taken to a hospital and were expected to survive.

Cates said the search for the two still missing was suspended late Friday afternoon and would resume on Saturday. He said he was still optimistic the two missing tubers could be found alive. Earlier in the day, rescue personnel were seen hauling rafts toward the water on Friday at a staging area in Eden, north of Greensboro near the Virginia state line.

Rockingham County Sheriff Sam Page identified those rescued as Reuben Villano, 35; and children Eric, 14, and Irene, 18, all of Eden. Also rescued were Karlos Villano of LaPorte, Indiana. A news release from the sheriff’s office didn’t indicate how Karlos Villano was related to the others, except to say he was a visiting relative.

The sheriff’s office identified the victims as Bridish Crawford, 27, and Antonio Ramon, 30, of Eden; and Sophie Wilson, 14, also of LaPorte, Indiana.

Still missing are Teresa Villano, 35, and Isiah Crawford, 7, both from Eden, the sheriff’s office said.

First responders indicated the survivors were caught in fast-moving water near the dam when they were found, according to recordings of scanner traffic on broadcastify.com.

Cheryl is learning to be ‘fine without anybody’: 'I'm happy just with me'