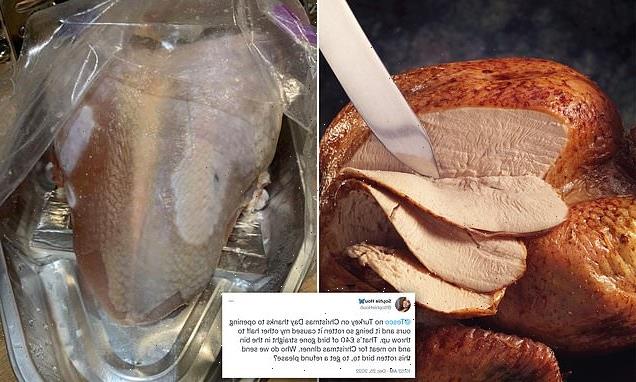 Angry shoppers have slammed supermarkets after finding their turkeys are rotten hours before their Christmas dinner.

Tesco, Sainsbury’s, Lidl and Asda customers took to the Twitter to vent their frustrations, with one saying the smell was ‘so bad it can’t be described’ with another saying they used scented candles to try and get rid of the odour.

One Sainsbury’s customer shared an image of the festive bird’s rotting flesh and said: ‘What the b***** hell @sainsburys. My turkey is rotten. Christmas ruined. Kids are crying. Now we have to have beans on toast. An absolute the disgraced. #turkey #christmas’

A second shopper said: ‘@sainsburys we’ve just opened our turkey and it is rotten despite having a 27th December use by date! How do we get a refund please?’ 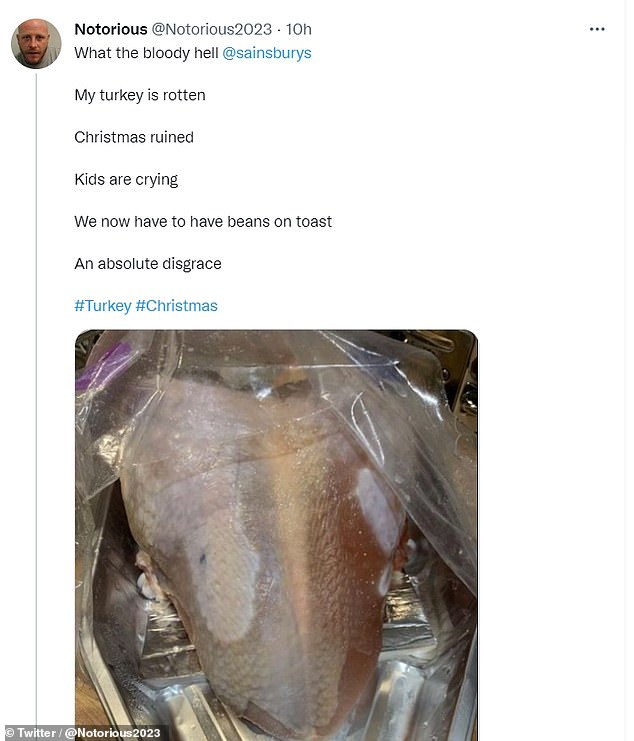 A third said: ‘Bought a Turkey less than 5 hours ago from @sainsburys opened it to give a soak overnight and it’s absolutely stinks. I’m so gutted. An complete waste thanks @sainsburys #rottenturkey #sainsburys

A fourth Sainsbury’s customer said: ‘The turkey my family got didn’t look rotten until we cooked it the smell was so bad it can’t be described it was rotten on the inside when we opened it up @Sainsburys yet again’

An Asda customer said: ‘@AsdaServiceTeam @asda christmas morning discover that our turkey bought from you just a few days ago is rotten?! First Christmas ruined for mine and my brothers children. Anything you can do to save the day?!’

Shoppers also took to Twitter days before Christmas to vent about last-minute delivery cancellations and their festive dinner essentials being substituted with unrelated items. 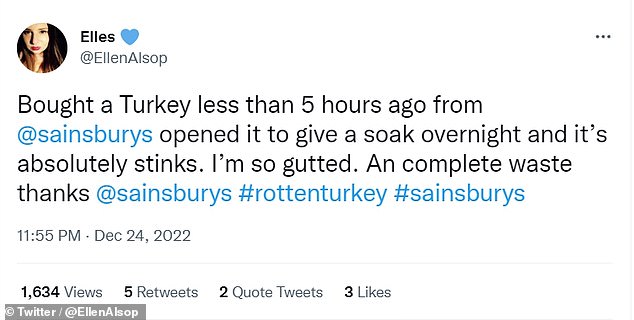 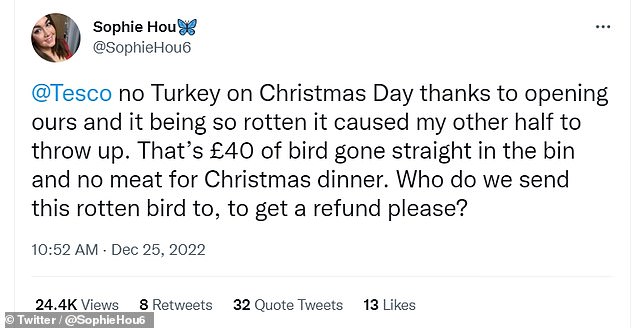 A Tesco customer said: ‘@Tesco no Turkey on Christmas Day thanks to opening ours and it being so rotten it caused my other half to throw up. That’s £40 of bird gone straight in the bin and no meat for Christmas dinner. Who do we send this rotten bird to, to get a refund please?’

The supermarket is also due to axe its remaining butchers and fishmongers in 279 stores as shoppers are opting for pre-packed items.

One Lidl shopper resorted to lighting scented candles to get rid of the smell of rotting turkey flesh. They said: ‘@LidlGB disappointed, rotten turkey crown absolutely stunk the kitchen out when we just opened it, straight into the bin outside, and got the scented candles going!’

MailOnline have contacted Sainsbury’s, Lidl and Asda for a comment.

A Tesco spokesperson said: ‘We’re really sorry to hear about this. We know that turkey is an important part of Christmas for many of our customers and we take great care when selecting and preparing our turkeys.

‘We would ask anyone who is not completely happy to return the product to one of our stores so we can investigate further, and issue a full refund.’