Home » World News » Slainte! Celtic Club buys an Irish pub – but it may not be home for long

Slainte! Celtic Club buys an Irish pub – but it may not be home for long

The Limerick Arms Hotel was founded by an Irishman in 1855, so there’s poetry in the fact it has been bought by Melbourne’s 134-year-old Irish social and cultural group, the Celtic Club.

The $5.3 million transaction gives the club a solid base and a stable income after years of members being “unmoored”, says club president Patrick McGorry. 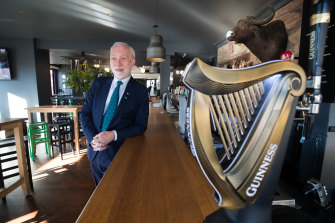 But debate over the future of the club – which has been in turmoil since it sold its Queen Street building in 2016 – continues, because the Limerick Arms in Clarendon Street, South Melbourne, may not be its permanent home.

While the club will hold music and literature sessions, meetings and functions at the venue, Professor McGorry says it is “a stepping stone” to getting it back on a firmer financial footing after recent struggles.

As well as any capital gain, it is estimated the Limerick Arms will earn the club $230,000 a year from its tenant, who runs the bar.

“At least we’ve got a landing place, for now,” Professor McGorry said.

Professor McGorry, who was born in Dublin and is executive director of youth mental health institute Orygen, joined the Celtic Club in 2019 amid a crisis for the organisation.

In 2016 it had sold its Victorian-era home of 58 years in Queen Street to a Malaysian developer for $25.6 million. The developer kept the facade and built a 48-storey apartment tower on the site.

But plans for the Celtic Club to move back in, buying back its own space, disintegrated over a disagreement about a members’ entrance to the building. 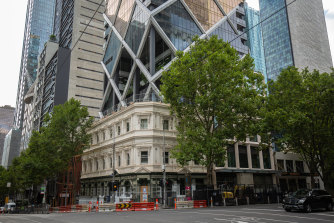 The former site of the Celtic Club in Queen Street. Credit:Scott McNaughton

The club has since spent millions paying debts and tax on the Queen Street sale, and on renting a William Street office and the Metropolitan Hotel in North Melbourne.

Professor McGorry said the club was not allowed to operate poker machines at the Metropolitan pub, which had also been losing money due due to low patronage. The Celtic Club has recently held events at other city pubs.

He said the issues had “unmoored” supporters, with membership falling to 540. Members had been “very frustrated” and “feel like they’re homeless”.

The Limerick Arms, whose sale was handled by agent Colliers in tandem with Cropley Commercial, is in a central location and close to young Irish people in South Melbourne.

One option the Celtic Club is now considering is to own a pub for income while operating poker machines at a separate venue, and owning a third venue for cultural and formal activities.

Some members are opposed to pokies. Others believe the club would not be viable without them. 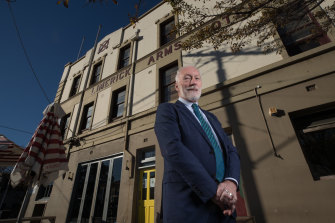 He said the club was a “precious institution” that he hoped would be reinvented with input from members.

“There’s a small group of members that are permanently angry,” he said. “No matter what we do, we won’t be able to satisfy them.

“But we absolutely want to address the genuine concerns of the bulk of the membership. And lay out a future, and they can choose if they want that future.“

Why Prince Charles Is Not Attending Princess Diana's Statue Unveiling