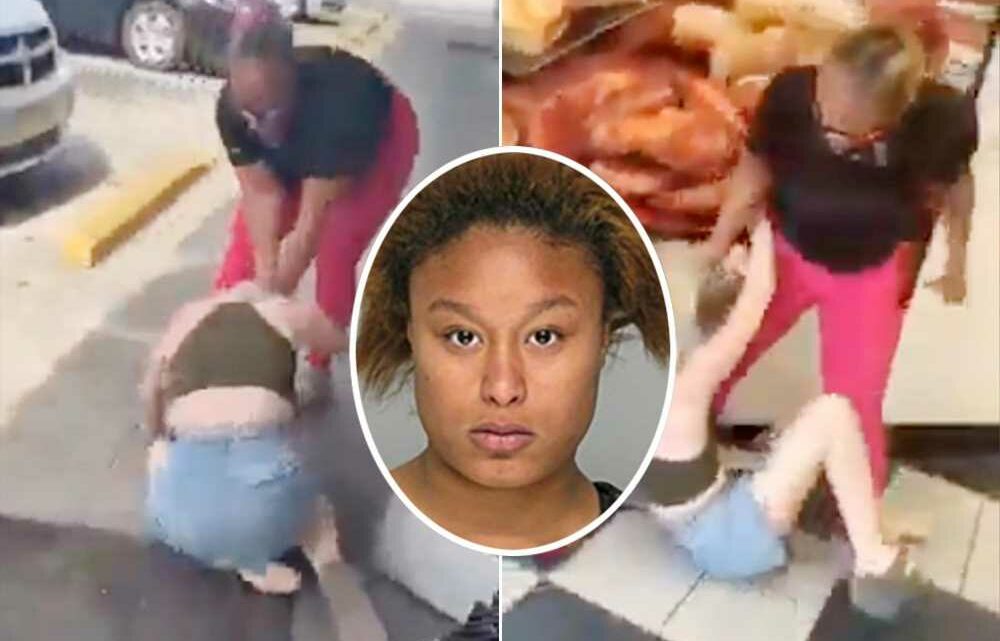 The female suspect caught on camera giving an epic beatdown to another woman at a Little Caesars in Georgia has been arrested, authorities said.

Brittany Breann Kennedy, 25, was taken into custody Tuesday on charges of aggravated assault, kidnapping and criminal damage to property in the pummeling of Emily Broadwater, 22, on May 17 at the restaurant in Augusta, according to the Richmond County Sheriff’s Office.

Viral cellphone footage of the beating that began inside as Kennedy allegedly yanked a chair out from beneath Broadwater showed the victim screaming for help as her attacker held onto her hair and walloped her several times.

A toddler then grabbed at Broadwater, whom Kennedy dragged out of the pizza shop by her hair, the intense clip shows.

Kennedy also stomped on the woman’s head several times outside the restaurant before Broadwater got up bloodied while asking about “her baby,” according to the footage.

The woman later identified as Kennedy then walked away after the savage beatdown, the 41-second clip shows. She then drove off in a Kia, police previously said.

Broadwater sustained multiple cuts, bruises and a black eye in the attack, but refused to be taken to a hospital, instead getting treated at the scene, according to a police report.

Prior to deputies arriving, two Little Caesars employees came to Broadwater’s aid as she sat with a little girl who had a pink bow in her hair, according to surveillance video obtained by The Post.

“The safety of our crew members and customers is the most important thing to us,” a Little Caesars spokeswoman said in a statement to The Post two days after the attack. “In any case where a customer or employee is in danger, we advise our crew members to call the police immediately.”

Kennedy, who was wanted for battery, was arrested in Augusta, WJBF reported.

The fight purportedly started at a home and continued at the Little Caesars, according to the station.

A motive in the alleged attack has not been publicly released, but Sgt. William McCarty of the Richmond County Sheriff’s Office told The Post last week that Broadwater and Kennedy were mired in a dispute due to the victim’s contact with the father of the suspect’s children.

“That seems to be the foundation of the disputes between Broadwater and Kennedy,” McCarty said, adding that the pair had previous confrontations “for some time” that had not led to any prior charges.

Messages seeking comment from McCarty on Wednesday were not immediately returned.