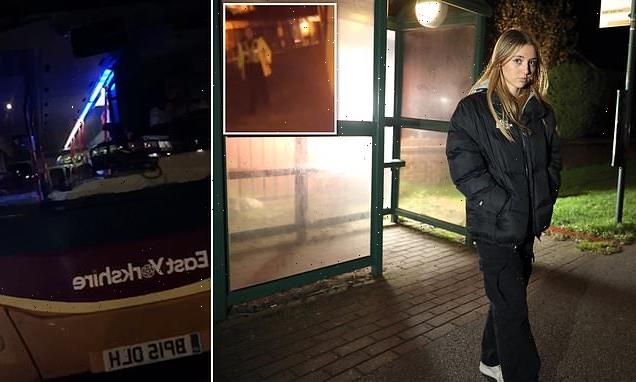 Exclusive: Teen girl, 16, says ‘stubborn’ bus driver who refused to let her board a bus ‘showed no compassion’ and wasted police time after an intervening officer was forced to drive her home

A 16-year-old schoolgirl has spoken for the first time about her fury at being stranded by a bus company’s ‘health and safety policy’.

Eleanor Hockney had been celebrating Guy Fawkes night with school friends when she left to catch the last bus home.

She walked into the bus station in Beverley, East Yorkshire, just minutes before the Number 121 was due to depart at 9.30pm on Sunday.

Eleanor, who lives in the nearby village of Dunswell, said: ‘I was not even late for the bus. I got to the station at 9.30. I was on the corner when I saw the bus reversing out the bay.

‘I started running towards it past a police lady. As I reached the bus, it had just reversed out of the bay. I went up to the doors and pleaded for him to let me on. I said ‘please let me on. I need to get home’ but he just shook his head at me. 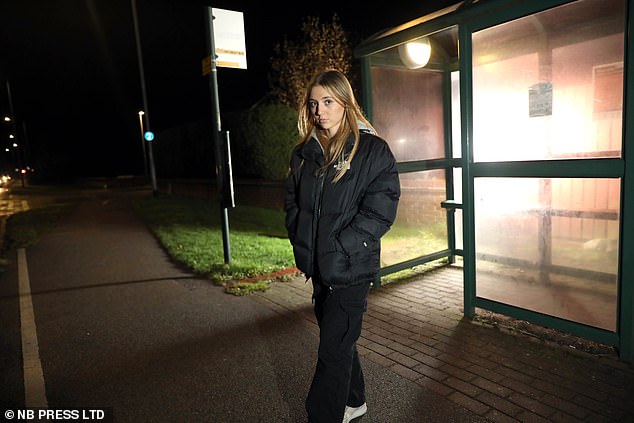 ‘I stepped in front the bus. It was not moving. I was stood in front of the bus, pleading for him to open the doors. He just kept shaking his his head and beeping his horn at me.

‘It was quite scary. I was stood in front of the bus for a few minutes before the police lady came over and asked what was going on.

‘She spoke to the driver herself. He said he could not let me on due to health and safety because they aren’t allowed to open the doors once they have reversed out the bay.

‘He said I was an adult as far as he was concerned. The bus station was nearly completely empty. There were no hazards.’

In the video, which went viral online, the police officer can be heard telling the driver: ‘I think there’s nothing around you, she could have got on the bus.’

To which the driver responds: ‘Just as your job is to follow instructions, so is mine. 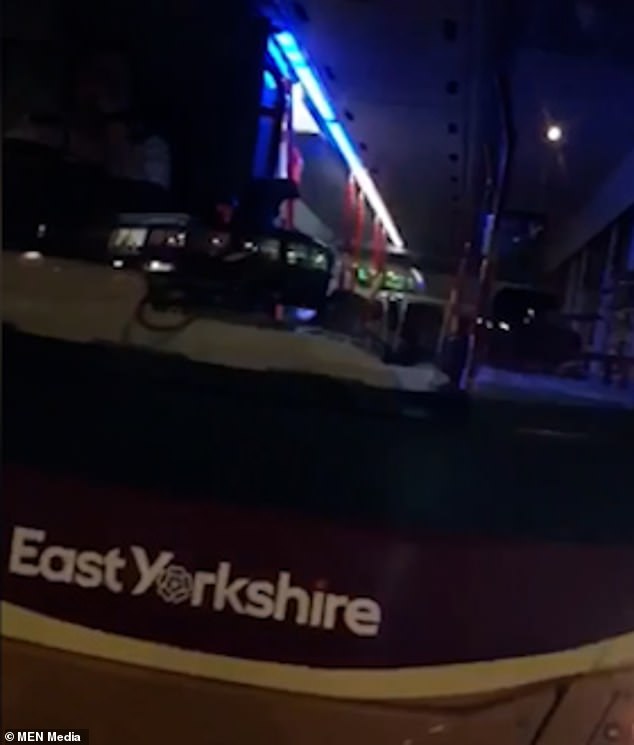 Eleanor was tearful when she was refused permission to board the bus home from Beverley bus station, East Yorkshire, on Sunday night after the driver refused to open the bus doors

Eleanor added: ‘The police lady drove me home which was nice of her but kind of a waste of police time because she had to radio in to extend her duty so she could drive me home.’

In response to unkind comments which have surfaced on social media, Eleanor responded: ‘I was not drunk. The vehicle was not moving when I was standing in front of it. I was not late. It was still 9.30.

‘It kind of upset me that the driver did not really seem to care. He was just being stubborn. He did not show any compassion.

‘It upset me quite a lot and scared me. I did not know what I was going to do and I felt really helpless.’

Had the officer not intervened, the child would have faced a six mile walk home, much of it along unlit and remote country lanes. 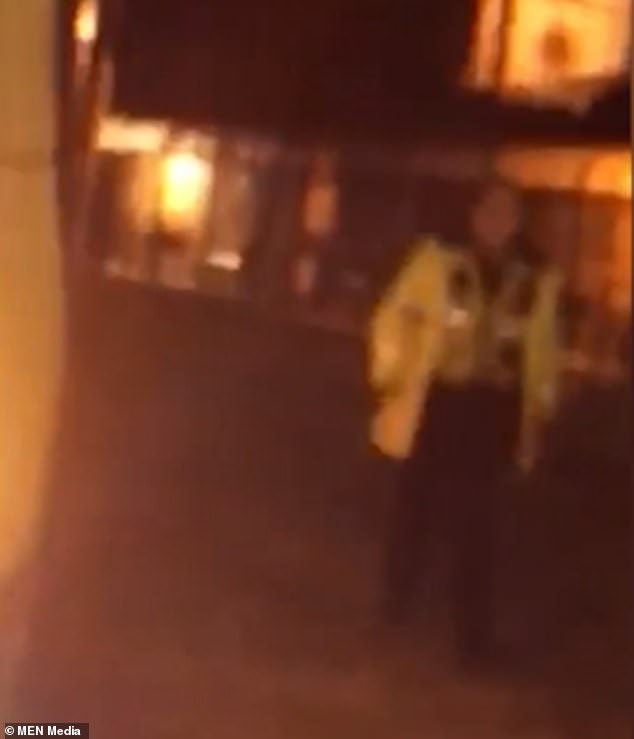 A police officer, who witnessed the standoff while attending another incident at the station, eventually came over to intervene and offered 16-year-old Eleanor Hockney a lift back home

The quick-thinking girl had recorded what happened on her mobile phone and her parents complained to the bus company on Tuesday, but received no response.

Her father Gary Hockney, 55, a local businessman, could not see why – if health and safety was an issue – the driver could not simply reverse back into the official stop so his daughter could board.

‘He had a jobsworth attitude and saying it was health and safety. I wonder what he would have done if it was his own daughter stood there,’ he added.

Mother Sarah Hockney, 55, stormed: ‘I am really annoyed and shocked. I think there should be a policy change. We are in the middle of nowhere and she has relied on buses for years.’

The family home is 15 minutes drive away and they would have been willing to pick her up but are concerned what would have happened if she been unable to get in touch with them.

Mr Hockney added; ‘I complained because I wanted the driver to reflect on his actions and the danger he put my daughter in. 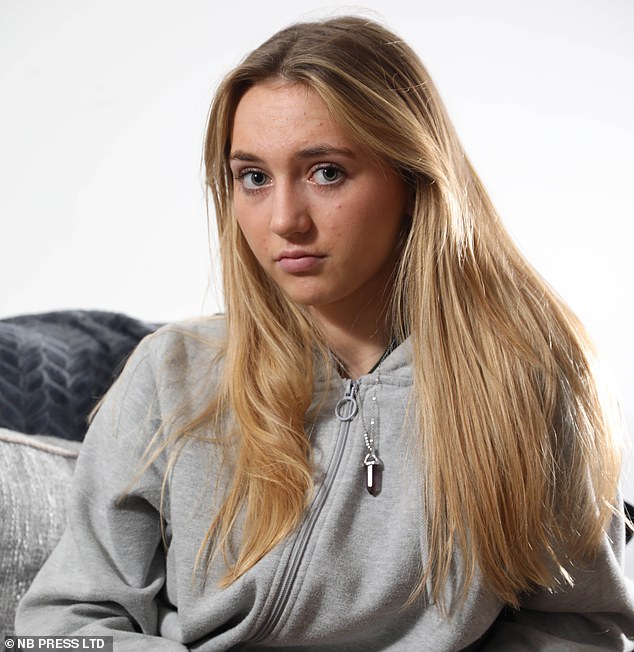 Eleanor said the driver’s behaviour left her upset because he seemed not to care that she was stranded and responded to critics online, insisting she wasn’t drunk when the event happened

‘But having seen the footage I think he would just have referred to health and safety and done it again. The bus company need to be more flexible and allow drivers to use their discretion.’

An East Yorkshire spokesperson told MailOnline: ‘Our role as a bus operator is to take people where they want to go, and we recognise the paramount importance of safety for women late at night.

‘On this occasion, we fell short and we apologise to the passenger concerned. We’re grateful to the police for intervening and for making sure she got home safely and soundly.

‘We have reviewed the circumstances internally and learnt the lessons accordingly, and we believe this is very much an isolated incident and not symptomatic of our usual standards.’

The Audacity and Triumph of Taylor's Versions – Plus, Rob Sheffield's Taylor-Song Rankings