Home » They're behind you! Florida fisherman fails to spot 'sneaky' stingrays 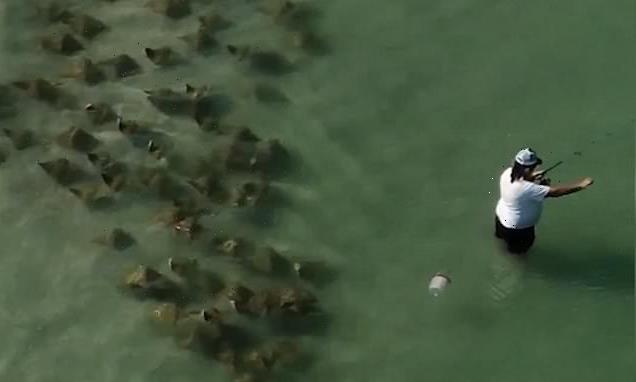 They're behind you! Florida fisherman fails to spot 'sneaky' stingrays

They’re behind you! Hilarious moment fisherman fails to spot a school of rays ‘sneaking’ past him in the shallows off a Florida beach

A Florida fisherman was left oblivious to a huge group of stingrays that darted behind him while he was in the water.

In footage shared online, the large school of cownose stingrays, numbering approximately 50 in all, pass by man standing in shallow water near St Petersburg Beach, Florida.

Known as a ‘fever’ of rays, the large group was captured on film as they swam up close behind the fisherman while he was in the Sunshine State on Monday, May 17. 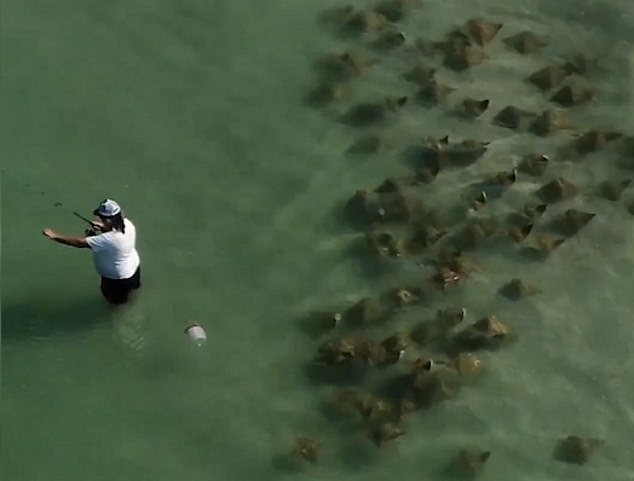 Drone footage of a man shallow fishing near St Petersburg, Florida and his close encounter with a large group of stingrays has been shared online

Mike McCarthy, the man who captured the footage, told Storyful he was expecting the rays to move out in front of the shallow water fisherman.

But to his surprise, he said the rays ‘sneaked around behind the guy, and he never noticed them passing by’.

McCarthy captured the drone footage and posted it to his YouTube channel, See Through Canoe, where it has been viewed thousands of times.

He also explained that unusually large numbers of rays have been migrating across the Florida coast this year.

Cownose rays are a particularly popular catch for those interested in fishing along the coast of the Atlantic Ocean. 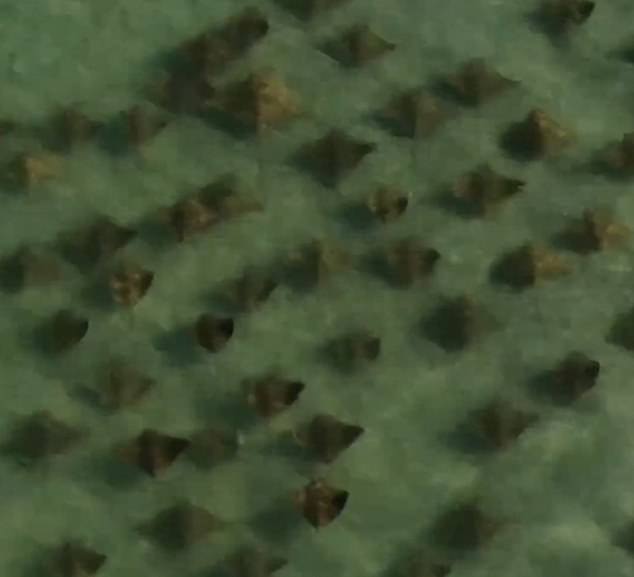 The predatory cownose stingrays pictured here may have been hunting for clams, oysters and other crustaceans in the shallows.

Once they discover their next meal, a cownose flaps its pectoral fins while sucking up prey into their mouth – using their strong jaws and thick tooth plates to bust open shells.

Many of those who watched Mr McCarthy’s video were left stunned by the footage.

One person commenting said: ‘I like how they all casually avoid him and go about their day. They’re like sea birds.’

Another wrote: ‘Like most wildlife, they tend to stay away from humans… Can’t say I blame them.’ 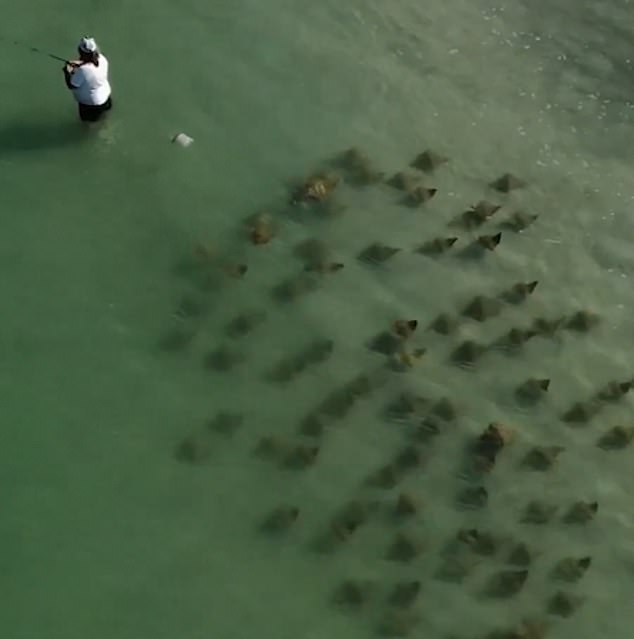 Cownose stingrays are named for their distinctly shaped head, which when observed from above can resemble a cow’s nose.

While they do vary in size, a large fish can grow up to 45 inches and weigh more than 50 pounds.

While these ‘shy’ stingrays possess a poisonous stinger at the base of their tails, they pose a ‘minimal risk to humans’ according to Oceana.

When migrating through the western Atlantic Ocean, schools or ‘fevers’ of rays can reach up to 10,000 strong.