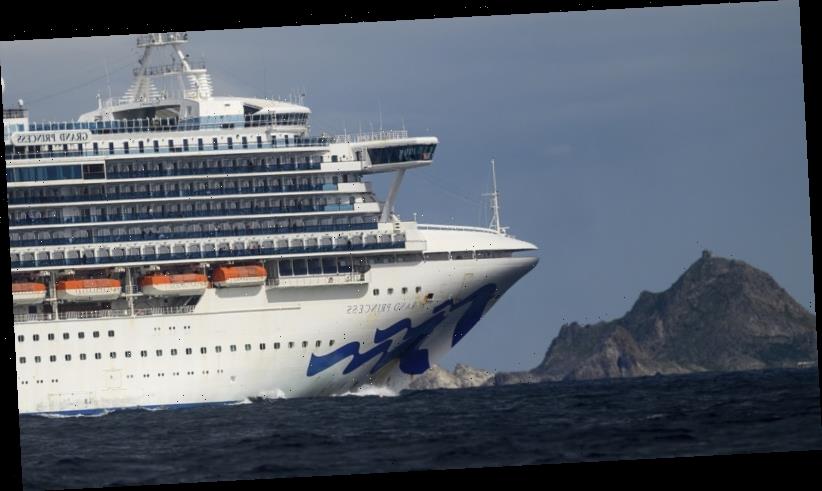 Thousands prepare to get off ship hit by coronavirus in California

Oakland: The cruise ship carrying at least 21 people infected with the coronavirus passed under the Golden Gate Bridge on Monday as federal and state officials in California prepared to receive thousands of people aboard the ship that has been idling off the coast of San Francisco. 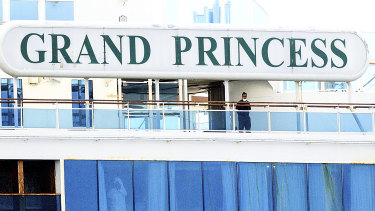 A man wears a mask aboard the Grand Princess as it maintains a holding pattern off the coast of San Francisco.Credit:AP

"Everyone was hollering and clapping as we entered the harbor," she said.

Personnel covered head to toe in protective gear woke passengers early Monday to check whether they have symptoms of COVID-19.

Michele Smith, 57, of Paradise, California, said a doctor knocked on her and her husband's cabin before dawn and asked if they had a fever or a cough. The couple on their annual vacation are healthy and, like the rest of the 2400 passengers aboard, have been isolating in their cabins since Thursday. 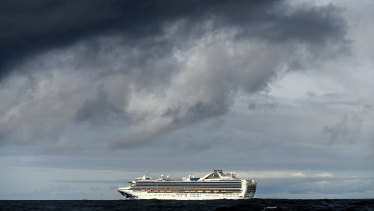 Carrying multiple people who have tested positive for COVID-19, the Grand Princess off the coast of San Francisco.Credit:AP

Another passenger, Laurie Miller, of San Jose, said they were told that anyone who was getting off Monday had already received a written notice and luggage tags.

"Not us!" she said in a message. "This is an absolute circus."

On land, fences were installed at an 11-acre site at the Port of Oakland as authorities readied flights and buses to whisk the passengers aboard the ship to military bases or their home countries for a 14-day quarantine. The more than 3500 passengers and crew on the ship hail from 54 countries.

"We're making every effort to get them off the ship as safely and quickly as possible," said Dr John Redd of the US Department of Health and Human Services, who urged passengers to remain in their rooms.

The number of infections in the United States climbed to 600 Monday, with at least 22 deaths. The virus has infected more than 110,000 worldwide, with Italy becoming the latest country to lock down a region in an attempt to prevent its spread. A combination of coronavirus fears and plunging oil prices sent stocks on Wall Street plummeting Monday.

Officials at the World Health Organisation said Monday that of about 80,000 people who have been sickened by COVID-19 in China, more than 70 per cent have recovered and been discharged from hospitals. The country reported 40 new cases of the virus, its lowest number since January 20.

More than 111,000 people have tested positive for coronavirus and more than 3800 people have died globally, most of them in China.

Elsewhere in the world:

In New York, Governor Andrew Cuomo said the executive director of the Port Authority of New York and New Jersey, which runs the metropolitan area's airports, tested positive and is isolated in his home.

Director Rick Cotton had been at the facilities while travelers were returning from hot spots, Cuomo said.

Dr Anthony Fauci, the National Institutes of Health's infectious diseases chief, said Sunday that widespread closure of a city or region is "possible." US Surgeon General Jerome Adams said communities will need to start thinking about cancelling large gatherings, closing schools and letting more employees work from home, as many companies have done in the Seattle area amid an outbreak at a care home that has killed 17.

In California, Governor Gavin Newsom and the mayor of Oakland sought to reassure the public that none of the Grand Princess passengers would be exposed to the US public before completing the quarantine.

The Port of Oakland was chosen for docking because of its proximity to an airport and a military base, Newsom said. US passengers will be transported to military bases in California, Texas and Georgia, where they'll be tested for the COVID-19 virus and quarantined.

About 1100 crew members, 19 of whom have tested positive for the new virus, will be quarantined and treated aboard the ship, which will dock elsewhere, Newsom said.

"That ship will turn around – and they are currently assessing appropriate places to bring that quarantined ship – but it will not be here in the San Francisco Bay," he said.

The Smiths said they hope their time spent in quarantine on the ship will count toward the 14 days they are expected to isolate themselves. But they said officials have not yet provided an answer.

The Department of State was working with the home countries of several hundred passengers to arrange their repatriation, including nearly 240 from Canada.

The ship has been held off the coast amid evidence it was the breeding ground for a cluster of more than 20 cases from a February 11 to 21 voyage.

Meanwhile, another cruise ship, the Regal Princess, pulled into a Florida port late Sunday night after being held off the state's coast for hours while awaiting coronavirus test results for two crew members, who did not have symptoms consistent with COVID-19.

Another Princess ship, the Diamond Princess, was quarantined for two weeks in Yokohama, Japan, last month because of the virus. Ultimately, about 700 of the 3700 people aboard became infected in what experts pronounced a public health failure, with the vessel essentially becoming a floating germ factory.

Many public venues in the US have been taking safety measures in an effort to limit the virus' spread. Several universities have begun online-only courses and the largest school district in Northern California, with 64,000 students, cancelled classes for a week when it was discovered a family in the district was exposed to COVID-19.

Plastic surgeon, 49, ‘drugged high-end escorts with tranquilizers and then filmed himself raping them – The Sun