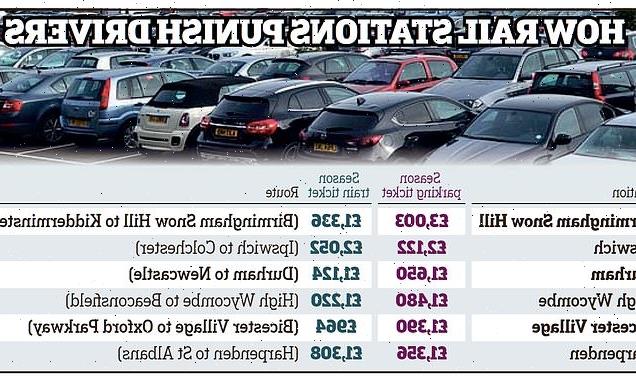 Revealed: The railway stations where commuters can shell out more on parking than using the train

Commuters can shell out more on railway station parking than on travelling on the train, campaigners said yesterday.

Their research shows that some drivers face bills reaching as high as £3,000.

In some cases it costs more to use a car parking space year-round than it does to take the train.

The Campaign for Better Transport, which carried out the research, called for a free parking trial at railway stations, and suggested that passengers could be offered discounted parking when they buy a train ticket.

Norman Baker, the pressure group’s spokesman, said: ‘High car parking charges at some train stations are deterring people from catching the train, which leads to less train usage and more road congestion. We want to see a trial of free car parking. We think the increase in fare income may well be greater than the loss of income from car parking.’ 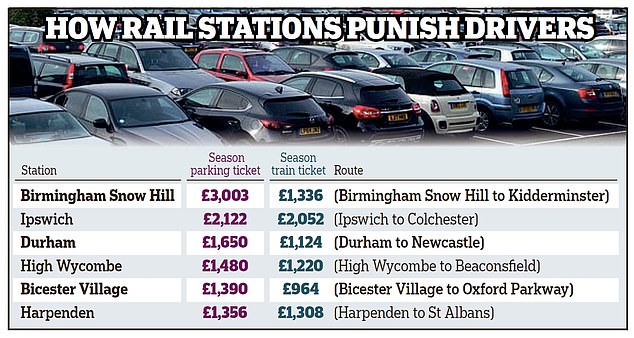 According to analysis by the CBT, it costs travellers £3,003 to park at Birmingham Snow Hill station – more than double the price of a £1,336 season ticket from there to Kidderminster.

Similarly, year-round parking at Durham railway station sets motorists back £1,650, well above the £1,124 needed for a season ticket to Newcastle.

The transport analysis was based on annual station car parking costs from individual train company websites and the National Rail season ticket calculator. It came as a YouGov poll of more than 2,000 people found that 58 per cent of English motorists believe the cost of parking at railway stations makes them less likely to use a train. But a spokesman for the Rail Delivery Group, an industry body, said: ‘Free or very low-cost parking could be used by people who are not intending to travel by train – with the result of fewer spaces left for passengers.

‘Charging can also ensure spaces are available for off-peak customers at a time the railway is trying to spread demand across the network timetable.

‘Train companies also use different parking charges to encourage passengers to try less busy stations that are on less crowded lines. We endorse the campaign’s call for improved alternatives to driving to stations – including more regular buses and safe walking and cycling routes.’

As well as hourly or daily rates for short-term visitors, there are also usually one week, one month, quarterly and annual options.

Many stations commission APCOA to run their car parks.