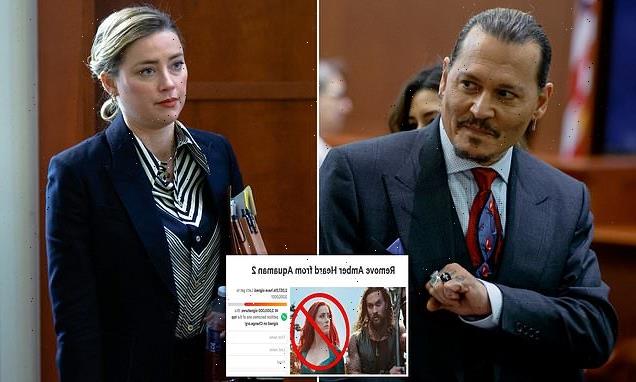 A petition calling for Amber Heard to be dropped from the upcoming Aquaman 2 movie has passed two million signatures amid allegations of domestic abuse against Johnny Depp in the former couple’s $100m trial.

Depp was dropped by Disney in his role as Captain Jack Sparrow in the fifth installment of Pirates of the Caribbean after Heard alleged he had domestically abused her.

Now more than two million people have signed a petition calling for Heard to lose her role Princess Mera in Aquaman 2 as it emerged she allegedly domestically abused Depp.

Depp told the court this week he was shocked when Disney dropped him from the franchise four days after The Washington Post published an op-ed by Heard in which she said she had been a victim of domestic abuse, without naming him.

Jeanne Larson, who started the petition, said Heard had been ‘exposed as a domestic abuser’ and canceling her appearance in Aquaman 2 would prevent her alleged abuse being glamorized.

She said: ‘Amber Heard has been exposed as a domestic abuser by Johnny Depp.

‘In his lawsuit, Johnny Depp describes many incidents of domestic abuse that he suffered at the hands of his (then) wife Amber Heard, including one incident where she punched him twice in the face and another where she shattered his finger with a vodka bottle, and his finger had to be surgically reattached. 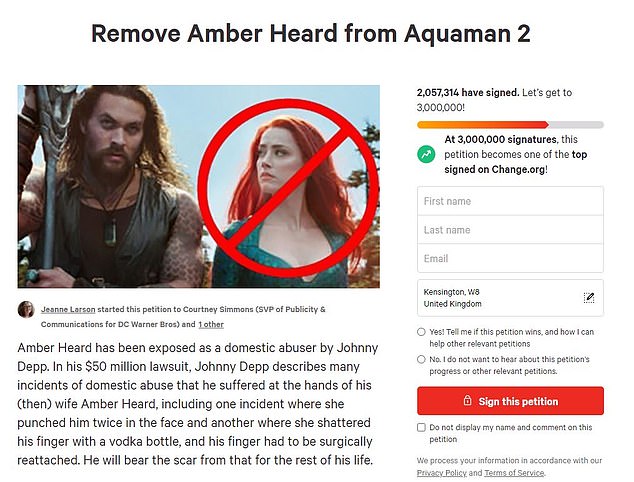 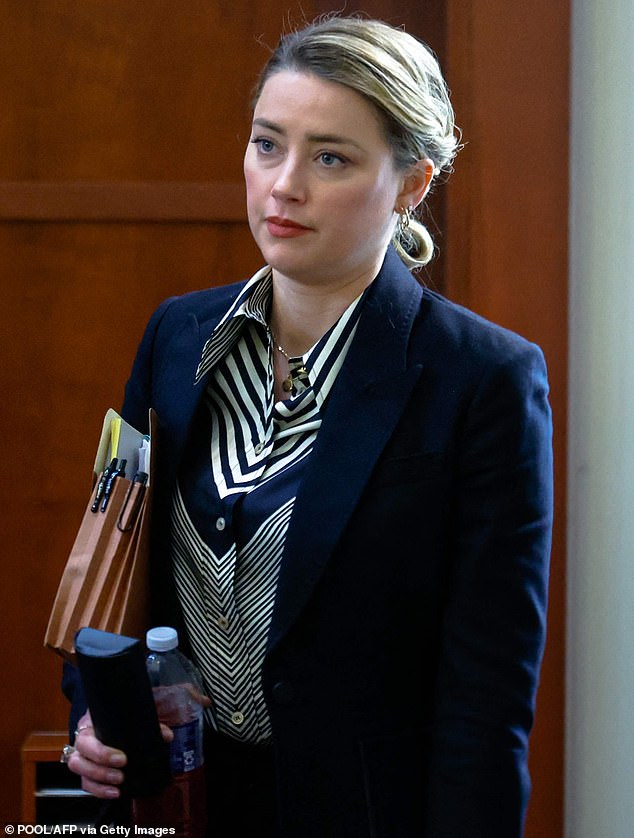 Amber Heard has claimed that she faced abuse at the hands of former husband Johnny Depp. Pictured: Heard returns to the courtroom for the defamation trial against her, at the Fairfax County Circuit Courthouse on April 27, 2022 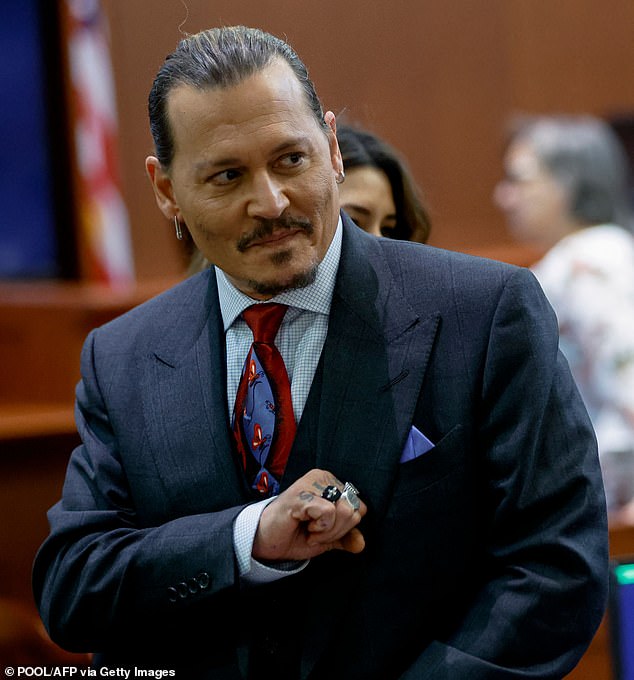 Yet Pirates of the Caribbean star Johnny Depp has alleged Heard domestically abused him. Pictured: Actor Johnny Depp gestures as he stands in the courtroom during a recess amid his defamation trial against his ex-wife Amber Heard, at the Fairfax County Circuit Courthouse in Fairfax, Virginia, on April 27 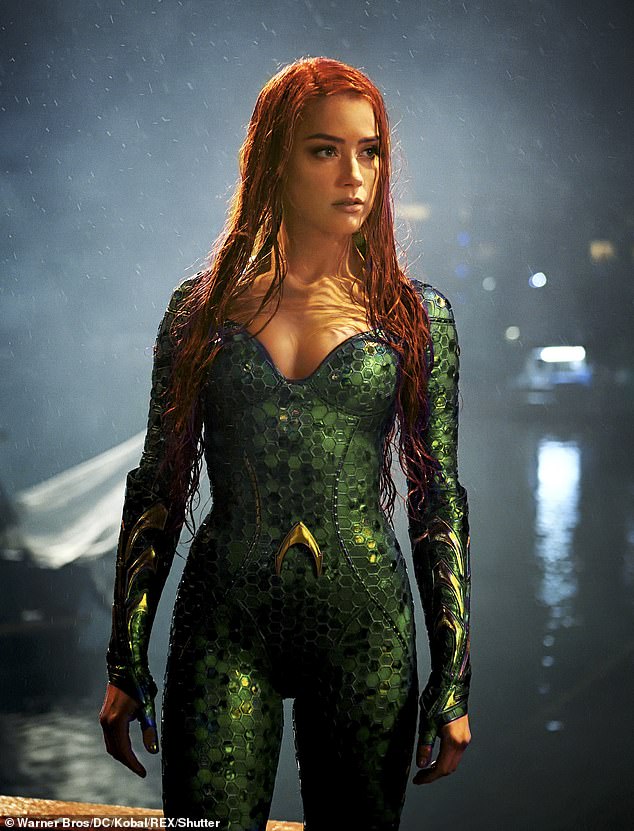 Heard featured as Princess Mera in the 2018 movie Aquaman, and is set to reprise her role in the sequel 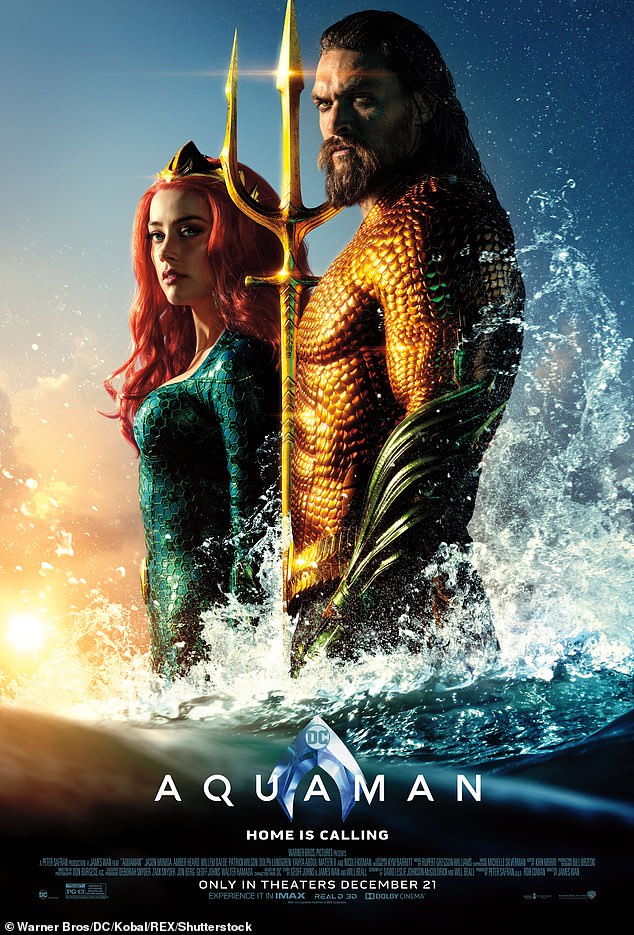 ‘He will bear the scar from that for the rest of his life.

‘Since Heard’s divorce from Johnny Depp, she has systematically crusaded to ruin Depp in Hollywood, repeating multiple accounts of fake incidents in which she had actually abused Johnny Depp, but lied and created false accounts of him being the abuser.

‘About the incident during which she shattered the bones in Johnny Depp’s finger and nearly severed it, causing Depp to require surgery to reattach and repair it. 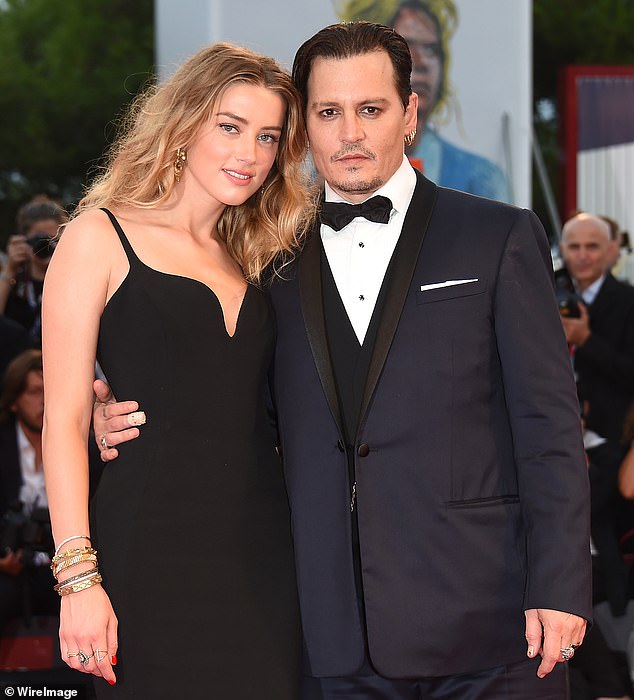 Depp and Heard are seen in September 2015 in Venice, Italy – the same year a blowout fight in Australia took place 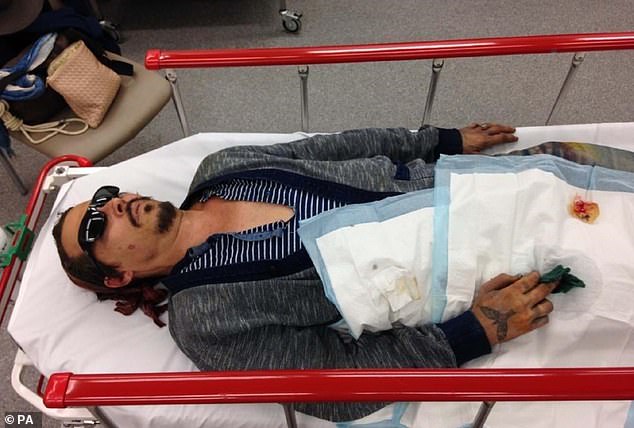 Johnny Depp being taken to hospital with a severed finger, following an incident in Australia in March 2015 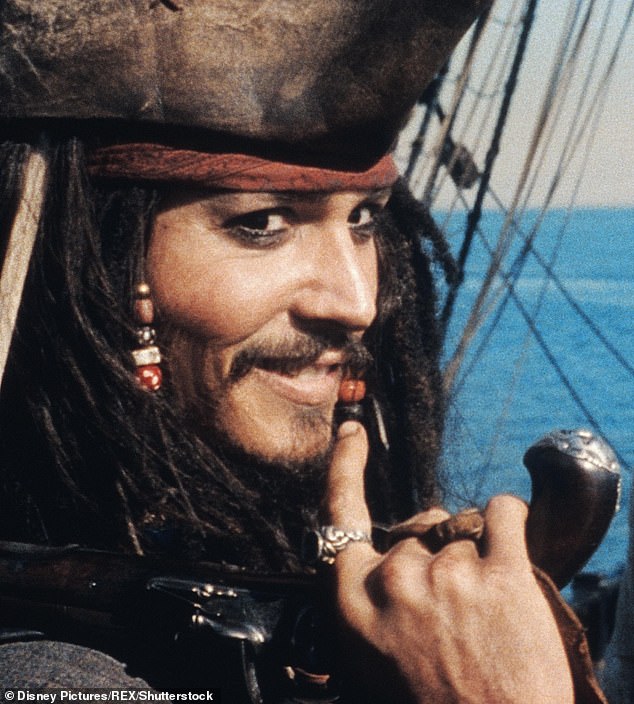 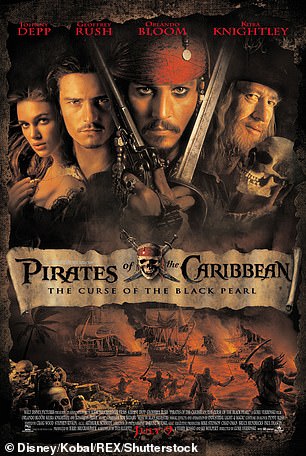 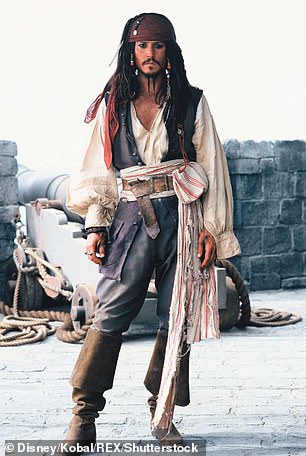 The first movie, The Curse Of The Black Pearl (left), made $654.3million at the box office. Depp has become best known for Pirates, although has also been in a number of other high profile roles including as Willy Wonka in Charlie And The Chocolate Factory and the eponymous hero of Edward Scissorhands 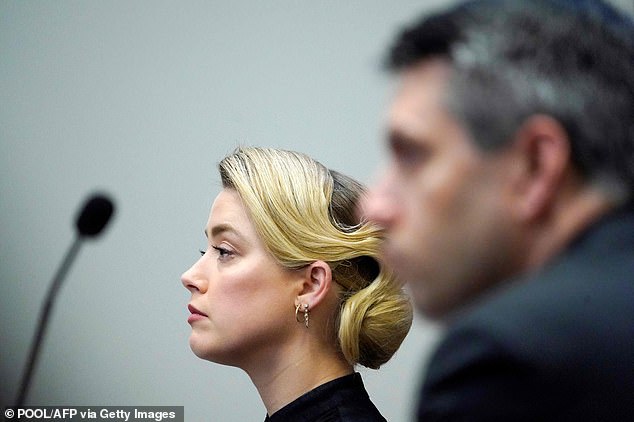 Depp is suing Heard for $50million over a piece she wrote in the Washington Post in which she described how she had been a victim of domestic abuse. Pictured: Heard listens in the courtroom at the Fairfax County Circuit Courthouse in Fairfax, Virginia, April 25, 2022

‘They must not ignore the suffering of Heard’s victims, and must not glamorize a domestic abuser.

‘Men are victims of domestic abuse, just like women. This must be recognized, and action must be taken to prevent a known abuser from being celebrated within the entertainment industry.

‘Do the right thing. Remove Amber Heard from Aquaman 2.’

Meanwhile, a former agent for Johnny Depp testified Wednesday that Amber Heard’s abuse allegations had a ‘traumatic impact’ on Depp’s image, and cost him the ‘Pirates of the Caribbean’ franchise.

Christian Carino, a talent agent at Creative Artists Agency, appeared by video deposition at Depp’s defamation trial, which has been taking place in Fairfax, Virginia, since April 11.

According to his contract that was submitted into evidence during the defamation trial, Depp earned $25million for his role as Captain Jack Sparrow in the fifth installment of Pirates of the Caribbean.

Carino testified that it became clear, though conversations with producer Jerry Bruckheimer and CAA co-chair Bryan Lourd, that Disney had decided it could not continue to employ Depp.

Carino said that the abuse claims were never openly discussed as the reason, but that it was simply ‘understood’ within the industry.

Carino was friends with both Heard and Depp, and represented both of them at various points, though he said he no longer has a relationship with either of them.

He testified that Depp is ‘one of the finest actors of his generation,’ and that has not changed despite the turmoil of his life in recent years. But he also said that the lawsuits — with his former business manager, his former attorney, and with Heard — have damaged Depp’s off-screen image.

‘I think what he was known for off-screen was a shroud of mystery of who he was, because he was not visible to the public,’ Carino said. ‘It changed with the exposure that came with the lawsuits.’

Carino was asked about the production of the fifth ‘Pirates’ movie, in 2015, and acknowledged that Depp was routinely late to set. 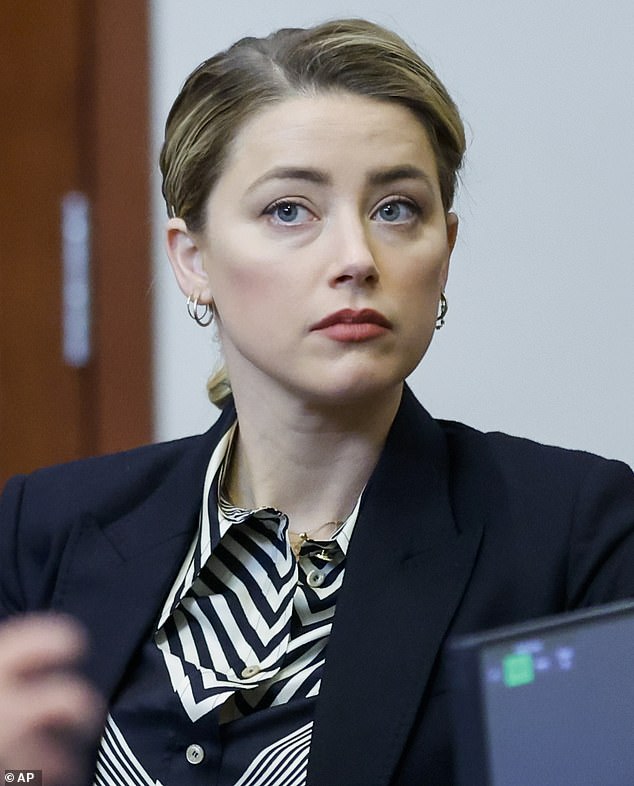 Heard published an op-ed on December 18, 2018, in which she referred to herself as a ‘public figure representing domestic abuse’. Pictured: Actor Amber Heard appears in the courtroom at the Fairfax County Circuit Court in Fairfax, Wednesday, April 27 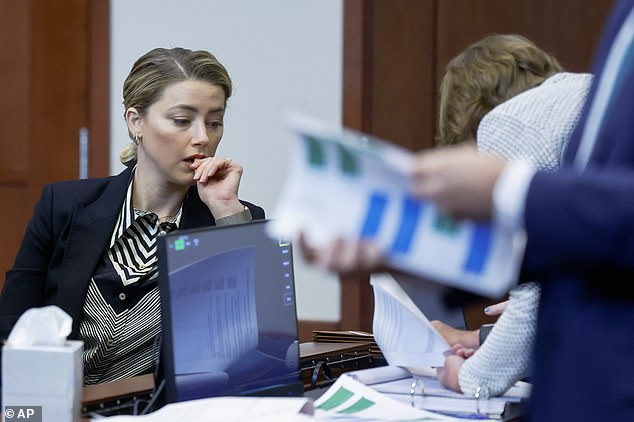 ‘I’m aware of him being tardy, but he’s been tardy on everything his entire life,’ Carino said, adding that the production had figured out how to work around the issue.

Carino was vague about when Disney decided not to hire Depp for a potential sixth ‘Pirates’ movie, which remains in limbo, saying at first that he could not specify even the year when it occurred.

The timing of that decision is a key issue in the case. Depp’s lawyers contend that it came just days after Heard published an op-ed, on December 18, 2018, in which she referred to herself as a ‘public figure representing domestic abuse.’

Heard’s lawyers argue that the decision was actually made earlier.

Depp’s lawyers presented Carino with an email chain from December 20, 2018, in which Depp’s agents and publicist passed around a MovieWeb article that stated that Depp ‘won’t return’ to the franchise.

Carino wrote: ‘Were we told this officially from Disney?’

Jack Whigham, another agent, responded: ‘No.’

On Monday Depp told the court he was surprised and felt ‘betrayed’ Disney dropped him after Heard’s allegations in the Washington Post.

He said: ‘I didn’t quite understand how after that long relationship and quite a successful relationship certainly for Disney that suddenly I was guilty until proven innocent.’

But Depp said that ultimately he soured on Disney and felt that there was ‘a very deep and distinct sense of having been betrayed.’

Heard first leveled her allegations in May 2016, when she filed for divorce and sought a restraining order.

The restraining order was later dropped and the couple issued a joint statement in which they stated that neither had made false claims for financial gain.

Earlier on Wednesday, jurors saw video depositions with two LAPD officers and a front desk employee who works at the Eastern Columbia Building, where Depp used to own several penthouses.

The officers were called to the penthouses on May 21, 2016, for a report of domestic violence.

Heard refused to make a report and the officers testified they saw no evidence of injury.