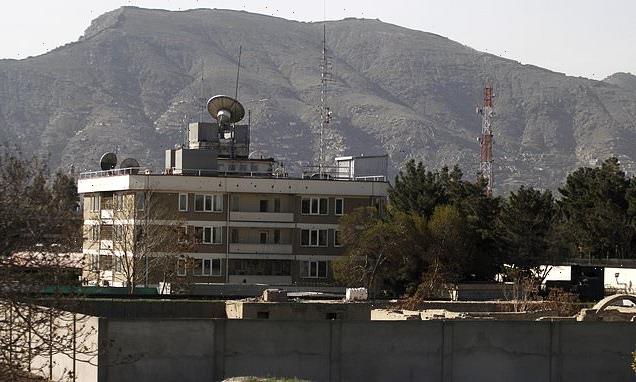 UK officials left contact details of Afghan staff scattered around the abandoned Kabul embassy when they fled the advancing Taliban.

A journalist from The Times discovered documents containing contact details – including names and addresses – of Afghan embassy staff, as well as CVs from local job applicants, left in plain sight scattered on the floors of the British embassy compound.

War correspondent Anthony Loyd reported from Kabul that the papers were discovered ‘scattered by the ashes of a barbecue in the backyard of a British embassy residency building’ on Tuesday while the embassy was being patrolled by the Taliban after being abandoned when the group seized the city on August 15.

Loyd photographed the documents but was unable to remove them as he was being escorted by the Taliban. The Times contacted the telephone numbers listed on the documents and discovered that some of the personnel and applicants were still waiting to be evacuated – and that a number were stranded outside the airport perimeter.

Others had already been evacuated from Afghanistan or managed to flee the country on their own.

Among those left behind were three Afghan staff and eight family members, including children, The Times reported.

Loyd gave details of the missing staff to senior Foreign Office officials stationed inside Kabul airport, who then arranged their evacuation. The paper waited 24 hours before publishing an article on the discovery to ensure there was sufficient time for the individuals to be brought to safety.

A Foreign Office response reported by the paper read: ‘During the drawdown of our embassy every effort was made to destroy sensitive material.’

While a source added: ‘We are grateful to The Times for sharing the information retrieved with us and working with us to enable us to get these three families to safety.’

However, the fact that documents containing personal contact information on Afghan staff were apparently left out in the open at the abandoned embassy suggests that protocols on destroying sensitive information may not have been followed.

The discovery ‘suggests that staff at the British embassy were careless with the lives of Afghan employees in the rush to save their own,’ The Times’ Anthony Loyd wrote.

The safety of Afghans who aided western diplomats and troops is of concern as international powers scramble to get their citizens out of Afghanistan before the August 31 deadline for the withdrawal of US and NATO forces.

Reports have emerged that the Taliban are stopping Afghans attempting to escape, including some who worked with foreign powers, from reaching Kabul airport.

The discovery of the contact details in the British embassy came as UK Foreign Secretary Dominic Raab, on holiday at the time, declined to speak to his Afghan counterpart regarding the evacuation of interpreters just two days before the capital was recaptured by the Taliban.

The US and UK have vowed that the attacks, which ISIS affiliate ISIS-K has claimed responsibility for, will not affect evacuation efforts.

Warnings had been issued prior to the attacks that the crowds of thousands gathering by the airport in a desperate attempt to secure safe passage out of Afghanistan could become a target for an attack.