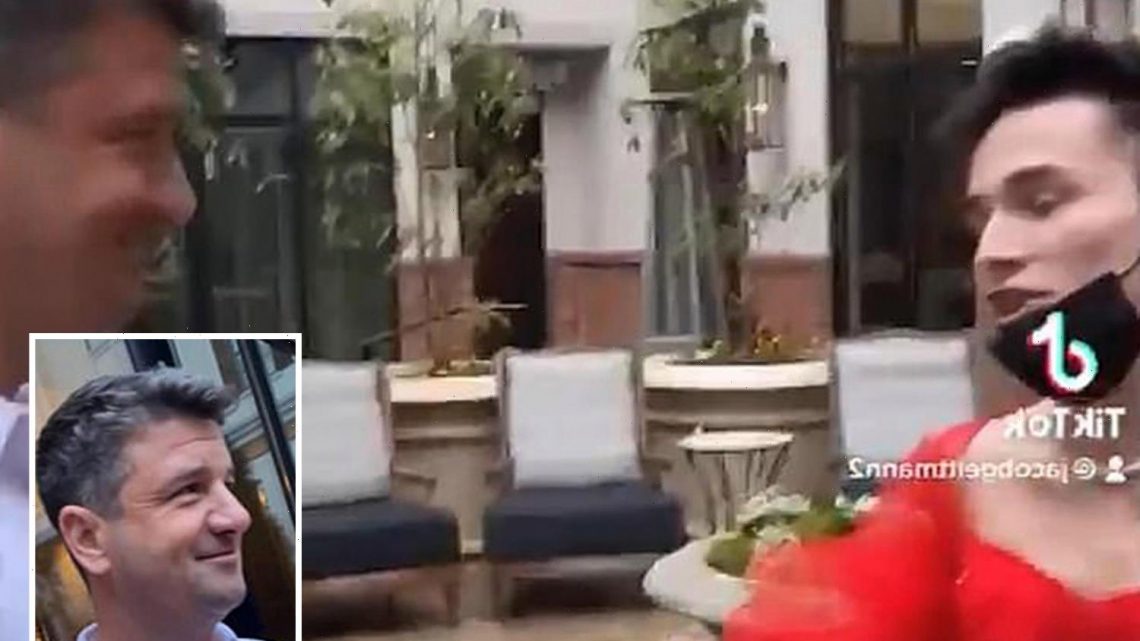 THE CEO of a telemedicine company has been fired after he was caught in a viral video ridiculing a teenage boy who wore a dress to his prom and telling him he looked like an "idiot".

VisuWell executive Sam Johnson, 46, was filmed arguing with student Dalton Stevens, 18, as the teen was taking photos with friends at a hotel in Franklin, Tennessee ahead of his senior prom on Saturday. 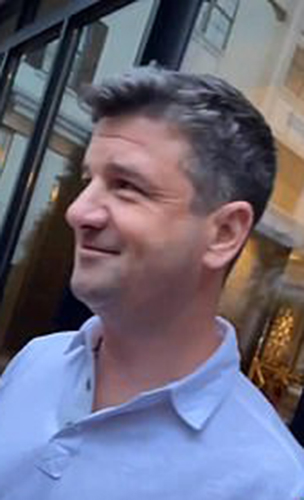 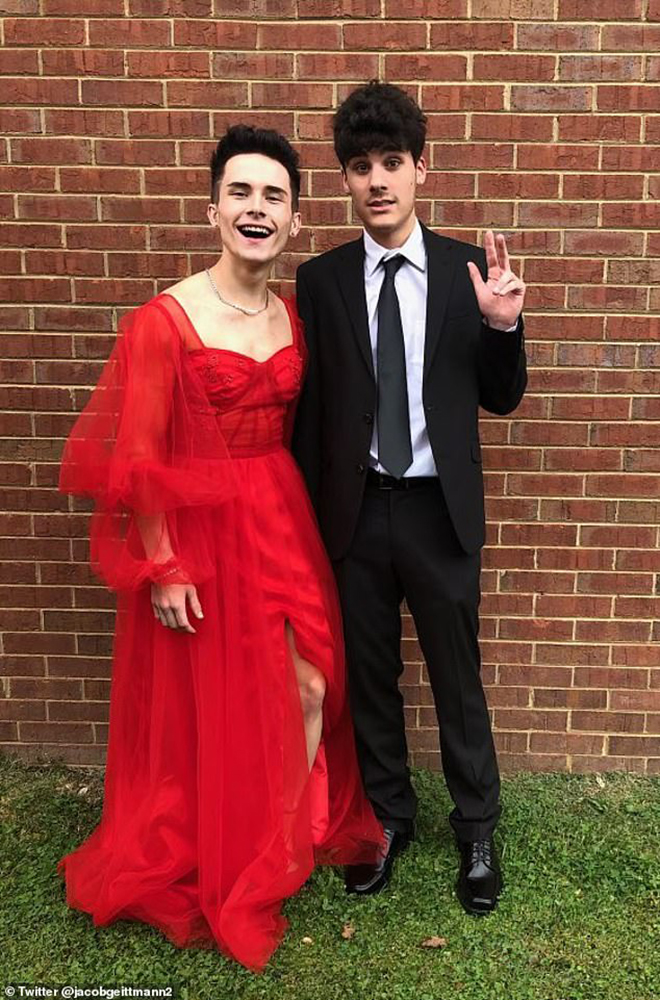 The CEO was fired on Monday after footage of the confrontation went viral on social media.

In a statement issued yesterday night, VisuWell said it has a zero-tolerance policy for intolerance and as a result has chosen to "terminate Mr. Johnson from his position as CEO, effective immediately."

Johnson has denied harassing Stevens and said their confrontation wasn't over "anything personal or involving a dress."

The footage begins with Stevens telling Johnson: "I chose what I wanna wear so you can f*** off" in a courtyard area of the Harpeth Hotel.

Johnson hits back with a smirk, "Is that right?".

Stevens then walks away from the CEO, who then follows, before telling the teen, "You look like an idiot."

A shocked Stevens shout back at Johnson, telling him to "f**k off" and "get the f**k away from me."

Filming the exchange is Stevens' boyfriend, Jacob Geittmann, who tells Johnson he "looks like a moron".

Around 30-seconds into the minute-long clip, Johnson attempts to smack the phone out from Geittmann's hand and inadvertently strikes Stevens on the back.

"No sir," Geittmann can be heard telling Johnson. "I can record you all I f**king want." 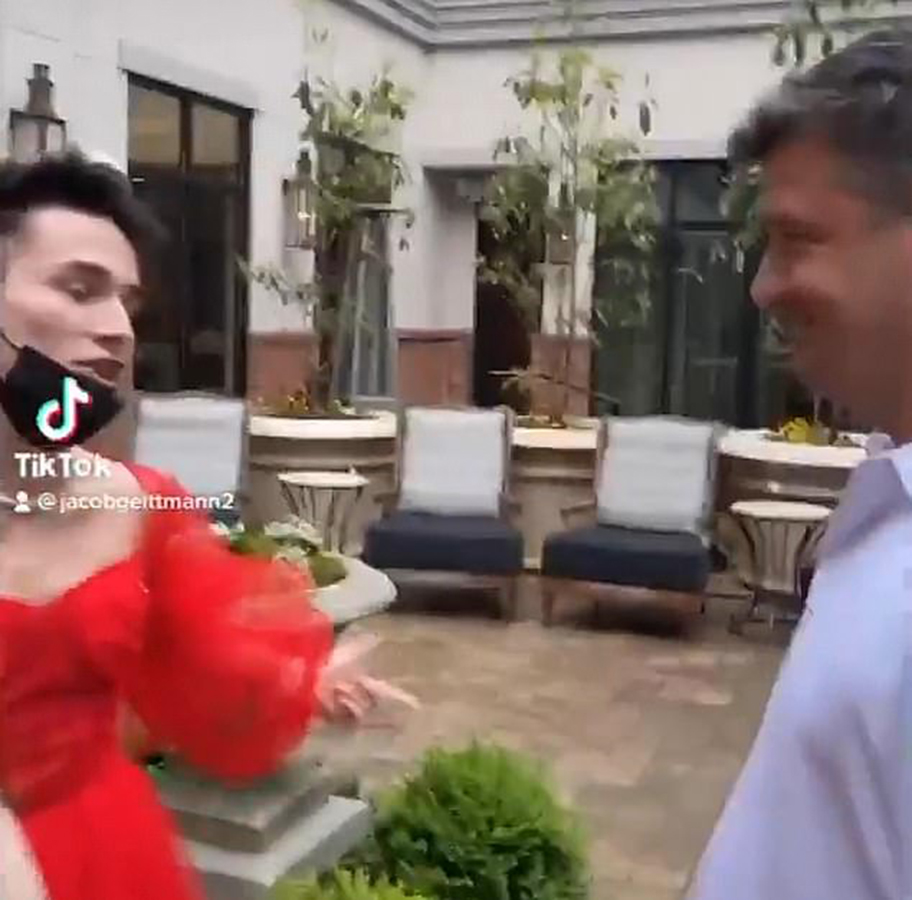 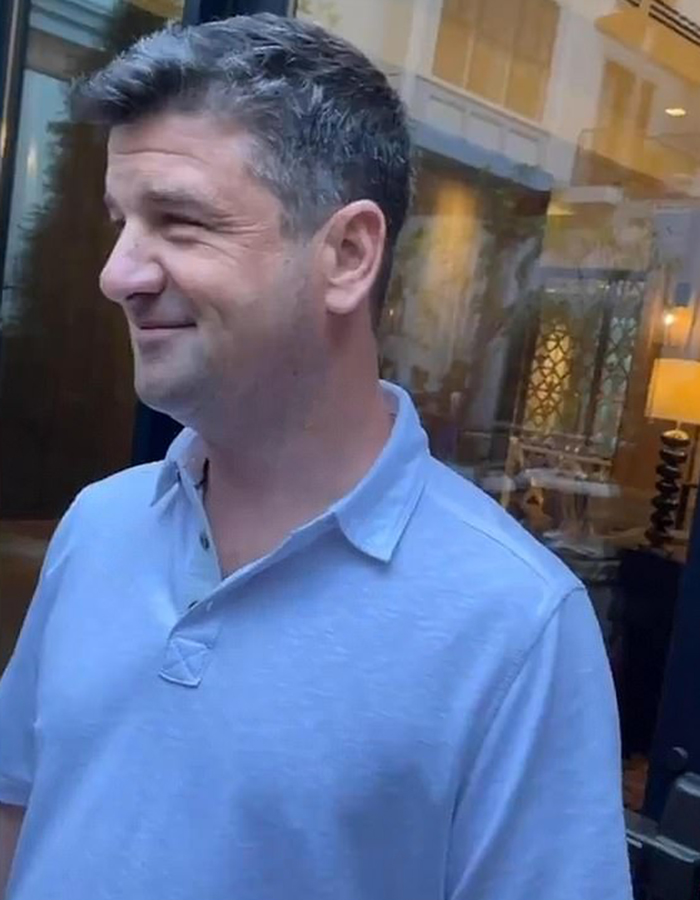 Onlookers attempt to intervene, pleading with Johnson to stop, saying: "It's just prom. It's kids, it's a bunch of kids. Come on, dude."

But Johnson ignores the pleas and continues to smirk at the teens and stand in close proximity to them.

Stevens then tells Johnson, "I'm sorry, I'm gorgeous," to which he replies: "Are you?"

Geittmann claims the confrontation was sparked when Johnson began harassing Stevens with "homophobic banter" as they were about to leave the hotel.

He allegedly told Stevens, "you have hair on your chest, you shouldn't be wearing a dress."

Stevens said he had chosen to wear a dress to prom to "prove clothing is genderless" and it "has no meaning."

"And I explained that to [Johnson], and he continued to just call me names and just follow me," Stevens told NBC.

Geittmann said Johnson, who he described as being visibly intoxicated, said hotel staff eventually removed him from the premises and called police. 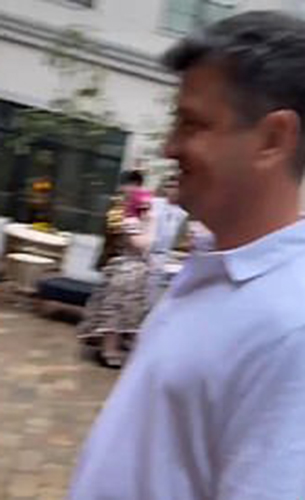 Geittmann first shared footage of the incident on TikTok, but it has also gained traction on Twitter, eliciting responses from the likes of comedian Kathy Griffin.

He also contested how the confrontation started, insisting, "it wasn't anything personal or involving a dress," rather "about obnoxious, loud behavior by this group of teens."

Johnson said he had approached the teenagers to request they "tone down the vulgarities around the families and children who were present."

"We had just sat down for dinner at this restaurant that we frequent, and I was returning from the restroom when I was presented with their loud cursing," he told the outlet.

"Making it about the dress was their idea and they edited out most of the exchange."

"I have no ill will towards anyone or their personal choices, so long as it does not harm me or my family," he added.

Johnson also denied being ejected from the hotel, insisting he and his family left of their own free will.

In a tweet on Monday night, VisuWell confirmed it had been alerted to the video and condemned Johnson's actions for contradicting "the high standards we set for ourselves."

"We unequivocally condemn the behavior exhibited by Sam Johnson in a recent video widely circulated on social media," the company wrote.

"After investigating the matter and speaking to individuals involved, the VisuWell BOD has chosen to terminate Mr. Johnson from his position as CEO, effective immediately."

Franklin police also confirmed that it responded to the scene after hotel staff called regarding an unwanted person on the premises.

Staff told cops that the man was involved in a confrontation with teenagers in their courtyard and that they wanted the man, seated at the hotel bar, to leave, police Lt. Charles Warner said.

"He denied any involvement in a confrontation," Warner told NBC. "Officers advised the man that he would need to close out his ticket and leave the premises, as requested by hotel management."

Dia Morgan, Stevens' mother, who wasn't present at the encounter, says the incident left her son "shaken up".

"If you let people like this guy continue to do this, then that's how you beat people's spirits," she told NBC.

"I mean, I'm incredibly proud of my son."