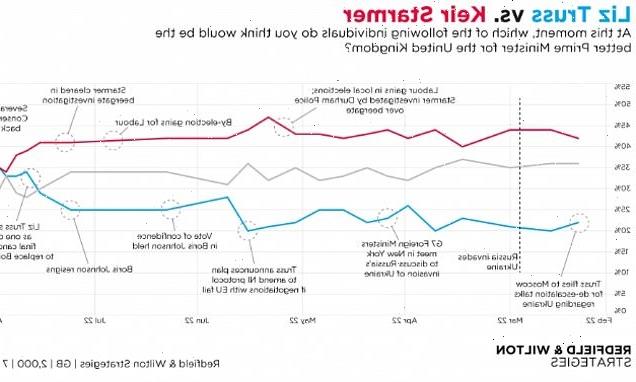 ‘Vote Rishi, get Labour’: Liz Truss allies issue warning as new poll shows voters think only Foreign Secretary – and not her rival Sunak – would be a better PM than Labour’s Sir Keir Starmer

Allies of Liz Truss have seized on a new poll that shows voters believe the Foreign Secretary – and not her rival Rishi Sunak – would be a better prime minister than Sir Keir Starmer.

The Truss campaign tonight warned Tory members that to ‘vote Rishi’ is to ‘get Labour’ as the same poll revealed Mr Sunak was less popular than the Opposition leader.

The survey for Redfield & Wilton Strategies reveals 38 per cent think Ms Truss would be a better PM than Sir Keir when the pair are pitched head-to-head, with the Labour leader backed by 35 per cent.

But when Sir Keir is put up against Mr Sunak, it is the Labour leader who comes out on top.

Two-fifths (40 per cent) of voters think Sir Keir would be a better PM when they are asked to choose between him and Mr Sunak, with the ex-chancellor backed by only 34 per cent.

A source on Ms Truss’s campaign said: ‘Yet again this poll shows Liz’s bold economic plan and optimistic vision for the UK is cutting through with voters across the country.

‘Liz is the only candidate that can beat Sir Keir Starmer at the next election – vote Rishi, get Labour.’ 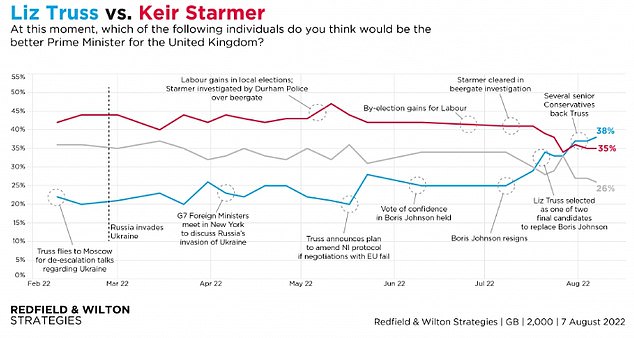 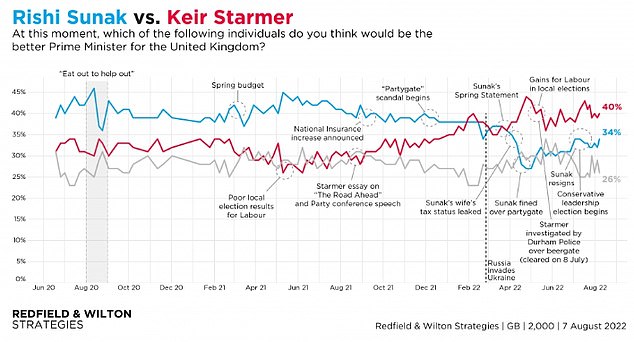 But when Sir Keir is put up against Rishi Sunak, it is the Labour leader who comes out on top against the ex-chancellor 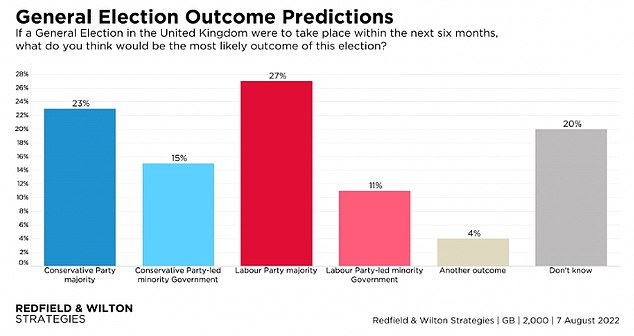 According to the survey, only 23 per cent think the Tories will win a majority at the next election with 15 per cent thinking they will retain power but as a minority Government 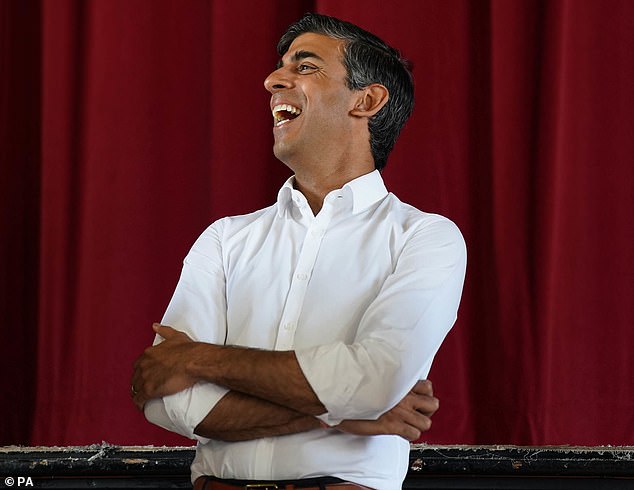 Mr Sunak shares a laugh at a campaign event in Ribble Valley today, as he continues his bid to succeed Boris Johnson as Tory leader and PM 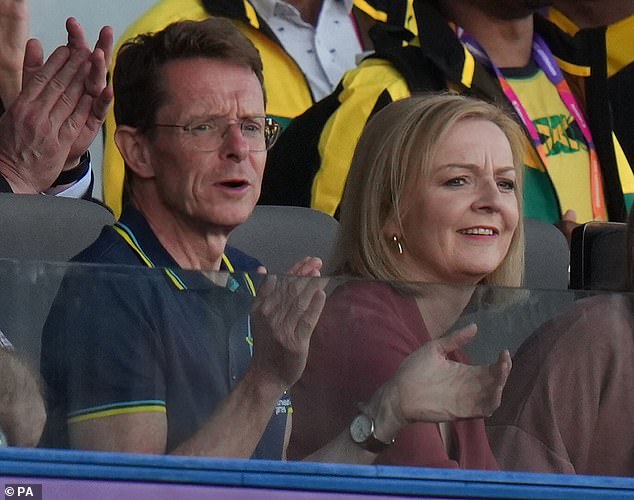 The poll revealed that whoever wins the Tory leadership contest between Ms Truss and Mr Sunak faces a battle to win the next general election.

The survey put Labour on 40 per cent support among voters, five percentage points ahead of the Tories (35 per cent).

It also showed that more than a quarter (25 per cent) of voters think Labour will win a majority at the next general election, with one-tenth (11 per cent) believing Labour will hold power but as a minority Government.

According to the survey, 23 per cent think the Tories will win a majority at the next election with 15 per cent thinking they will retain power but as a minority Government.

Their polling results contrasted with a YouGov survey for The Times conducted last week.

They found Ms Truss, who is the favourite to succeed Boris Johnson as PM, would not provide a boost for Tory support against Sir Keir.

In a head-to-head against the Labour leader, Mr Johnson was backed as the best prime minister by 28 per cent of voters – with Sir Keir supported by 38 per cent.

But Ms Truss also polled at 28 per cent when pitched against the Labour leader, who was backed by 31 per cent of voters as the best PM when put up against the Foreign Secretary.

Mr Sunak did slightly worse in a head-to-head against Sir Keir, with 27 per cent backing the ex-chancellor when asked who would make the best PM.

Sir Keir was again backed by 31% of voters when they were asked to choose between the Labour leader and Mr Sunak. 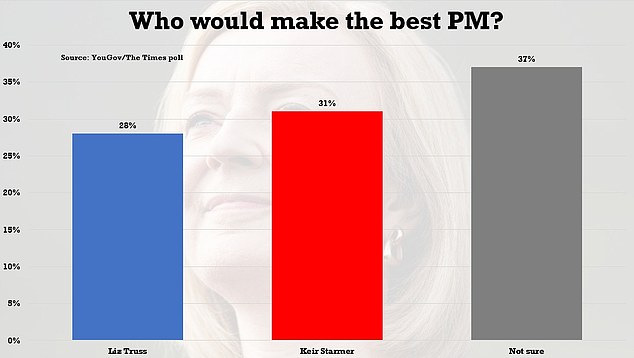 A separate YouGov poll found Ms Truss, who is the favourite to succeed Mr Johnson as PM, would not provide a boost for Tory support against Sir Keir 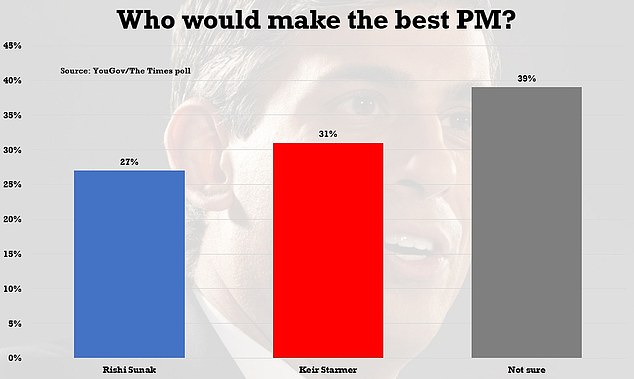 The YouGov survey found Mr Sunak did slightly worse in a head-to-head against Sir Keir, with 27 per cent backing the ex-chancellor when asked who would make the best PM

The YouGov poll also served a warning that whoever wins the contest will face an immediate battle to convince the electorate they are a better prospect than Mr Johnson.

The survey found, among swing voters who backed the Tories in 2019, 62 per cent still support Mr Johnson against Sir Keir.

But the poll revealed how Ms Truss appears to be more popular among Tory voters than Mr Sunak.

When asked who would make the better PM between the Tory contenders, 41 per cent of those who voted Conservative in 2019 backed Ms Truss, with 26 per cent backing Mr Sunak.

Yet, among all voters, Ms Truss and Mr Sunak are tied on 24 per cent support each when it was asked who would make the best PM – although a large number were undecided.

Almost half (49 per cent) of all voters were not sure who would make the best PM between the Foreign Secretary and ex-chancellor.

Amid increasingly bitter exchanges between Ms Truss and Mr Sunak over their approach to the cost-of-living crisis, the same poll found that two-thirds (64 per cent) of voters believe inflation should be the new PM’s main priority.

Just 17 per cent said they should focus on tax cuts.

Ms Truss has pledged to cut National Insurance and green levies on energy bills within days of taking power.

But Mr Sunak has accused his rival of ‘starry-eyes boosterism’ and vowed to only cut taxes once inflation is under control.

The Foreign Secretary’s camp hit back and branded the ex-chancellor the ‘founding father of a recession’.