Home » World News » ‘We are not safe’: Warning on city buildings as more quakes predicted

‘We are not safe’: Warning on city buildings as more quakes predicted

If an earthquake similar in size to the 5.9 magnitude tremor that hit Mansfield last week was to strike directly beneath Melbourne, more than 1400 people could be killed or injured and $163 billion worth of building damage sustained.

Modelling for the Natural Hazards Cooperative Research Centre forecasts a magnitude 6 quake striking under the city would shut down much of the transport network, with train and tram tracks bending and bridges collapsing.

Most of the city would lose power for days. Water and sewer pipes might be damaged, leading to potential water contamination. 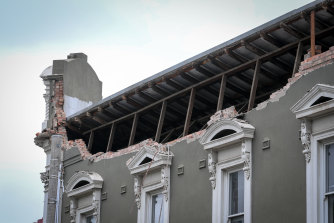 Bricks crashed onto Chapel Street when the parapet above Betty’s Burgers collapsed about 9.15am on Wednesday when a magnitude 5.9 earthquake struck near Mansfield, about 130 kilometres north-east of Melbourne.

Dr Brendan Duffy, senior geologist with professional services company GHD, warned the city’s ornate parapets above ageing Melbourne streets could become “shrapnel” in an earthquake and put lives at risk if they were not reinforced before another serious tremor shakes the east coast.

People have been killed in Christchurch in New Zealand when similar parapets fell to the ground during earthquakes.

“Pretty much every parapet in Christchurch is gone and nobody in their right mind would put one up because they’re dangerous. It’s just shrapnel,” Dr Duffy said.

He said Melbourne probably avoided injuries last week because of the COVID-19 lockdown.

“If someone had been running out of Betty’s Burger bar, they would have been killed,” Dr Duffy said.

“Lockdown was an absolute, I hesitate to use the word ‘God-send’, but it was certainly a factor in avoiding injuries.” 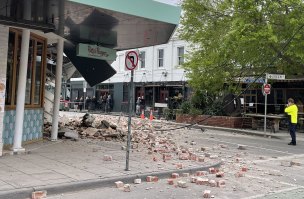 Nobody was injured when the bricks smashed onto Chapel Street.Credit:Eddie Jim

Minor damage was worst along Chapel Street, where ageing buildings stand on loose sediment from the Yarra River which amplifies surface waves in an earthquake.

The sediment is generally stable but ageing, unreinforced buildings above it could be vulnerable, when geological, engineering and architectural conditions align.

Melbourne’s building code requires new commercial buildings and residential towers to be able to withstand an earthquake of between 6.5 and 7 magnitude; but there are no rules for homes, nor for buildings built before 1989.

“An event like the one we’ve just experienced is actually a bit of a wake-up call to go back and have a look at things like that, actually understand what is our earthquake hazard? And what is the risk associated with having these unreinforced buildings?” Dr Duffy said.

Many people believe because Australia sits on the middle of its tectonic plate, it is largely immune from earthquakes, said Professor Priyan Mendis, who is on the Australian standards committee on earthquakes.

But Australia’s plate is moving northwards, and is steadily being jammed between other plates, gradually squeezing the country. This pressure builds up over time – before suddenly being released at a fault.

“People think we are safe – we are not safe. We will see more severe earthquakes in the future,” Professor Mendis said.

Dr Duffy said Victoria was capable of experiencing a magnitude 7 earthquake, although that would be extremely rare; other experts put the probability of a magnitude 6 earthquake hitting Melbourne at one in 1000. Dr Duffy said authorities should prepare for that scenario and consider what buildings needed reinforcement and who would pay for it.

Ageing buildings could be retrofitted to withstand earthquakes, like they have in Christchurch, he said.

Professor Mendis said tall buildings were actually quite flexible and tended to be safer.

People should stay inside and take cover beneath a table or door frame during an earthquake. Buildings are unlikely to collapse and most injuries occur outside from falling debris.