Home » World News » What is the ‘feels like’ temperature?

The cold snap of air as you walk out the door in the morning might have you questioning whether this year’s sharp winter is eluding the experts. But the “feels like” temperature, a measurement developed by an Australian researcher 40 years ago, might give you a better idea of how to dress for the day.

In Sydney on Thursday, locals saw the temperature forecast show 12 degrees at 10am, but it felt like 5 degrees. In Melbourne, the mercury is forecast to drop to 8 degrees at 7am on Saturday, but the “feels like” temperature is set to be as low as 2 degrees.

So where does the difference come from? 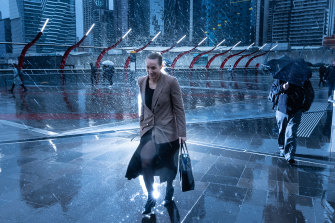 Icy winds and rain greeted commuters on the first day of winter in Melbourne’s CBD.Credit:Jason South

It does exactly what it says on the tin – it’s a measure of what the weather actually feels like when you’re out and about in it.

The “feels like”, or apparent, temperature is what a regular person would experience when outside, in the shade, and dressed for the weather, says Bureau of Meteorology forecaster Pieter Claassen. “The apparent temperature will take into account differences in conditions that … will affect how that temperature feels to people,” he says.

“Feels like” is derived from, but not the same as, the initial temperature reading, also called the “ambient” temperature, which is measured through thermometers sheltered in boxes called Stevenson screens (named after the Scottish civil engineer who designed the first version in 1864). Louvred slats protect the thermometer from sun and rain while letting air move around it.

This allows meteorologists to get an accurate reading of air temperature in the shade. But it “doesn’t really account for the subtle differences in how conditions feel day to day,” Claassen says. To provide a fuller picture, “feels like” is calculated using air temperature along with factors including wind and humidity. More specifically, despite its less-than-scientific sounding name, “feels like” is derived from this carefully designed equation: 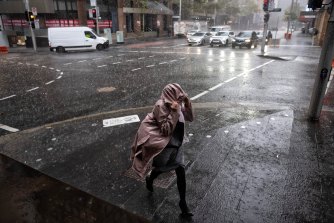 A pedestrian runs through heavy rainfall in Sydney’s CBD in May.Credit:Nick Moir

And then they take 4 off at the end for good measure, which Claassen explains is part of the calibrations done when Australian researcher Robert Steadman first designed the equation.

“The equation is to give us a specific reading, but the general rule of thumb is: the windier it is, the cooler it will feel, and the more humid it is, the warmer it will feel,” Claassen says. “So it’s a balance of those two factors, which takes the actual temperature and turns it into a ‘feels like’ temperature.”

How does wind affect how cold you feel?

When the wind whips against you, it can feel like it’s slicing through your thermals. But it’s not just layers of clothing it’s cutting through; you also have a natural layer of warmer air around your body that helps to insulate you from cooler surrounding air.

Wind can strip away that layer and leave our skin more exposed to the cold – thus, wind chill.

Where does humidity come into it?

Humidity, which is how much water vapour is in the air, is a big deal when it comes to feeling the heat. Sweating helps our bodies to cool down. But when there’s already a lot of moisture in the air, it makes it harder for sweat to evaporate from our skin.

In the tropics, air temperature has been recorded at 29 degrees while the “feels like” temperature was 38. “These factors are quite a big influence, particularly in tropical places … given the humidity will change day to day whereas the actual temperature won’t change much day to day,” Classen says. 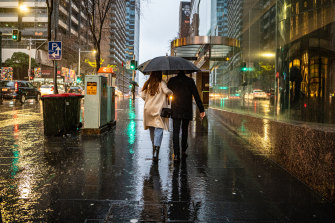 Forecasts showed Sydneysiders could expect to experience a month’s worth of rain in five days in July.Credit:Flavio Brancaleone

A key point in all of these readings, from ambient to “feels like” temperature, is that they are taken in the shade. Claassen says that’s because there can be a lot of variability in radiant heat, depending on factors such as the time of day and whether the sun is obscured by clouds. “Standing in direct sunlight can add up to 8 degrees to the ‘feels like’ temperature,” he says. “But we don’t include that in the equation just because we want to be consistent and the effect of the sun can change a lot over the course of a day.”

Aside from meteorological effects, how much individual humans experience the weather can differ wildly based on everything from gender to hormones to health conditions.

As for alternative ways to measure “feels like”, there is a BOM-approved equation that tries to account for the effect of the sun, and it’s understandably more complex:

All the values are the same as the more commonly used equation, with the addition of “Q”, which gives a figure for the impact of the sun by quantifying the net radiation absorbed per unit area of body surface.

And there is “wet bulb globe temperature”, which takes into account humidity and wind chill as well as the effect of sunlight. It’s more commonly used in workplace health and safety scenarios because it gives a good indication of how safe it is to work in hot, humid environments.

But for day-to-day use, Claassen says the simple “feels like” temperature gives us the best indication of what it is really like when we step out of our door.

If you'd like some expert background on an issue or a news event, drop us a line at explainers@smh.com.au or explainers@theage.com.au. Read more explainers here.