Home » World News » Why is everyone so angry about everything all of the time? 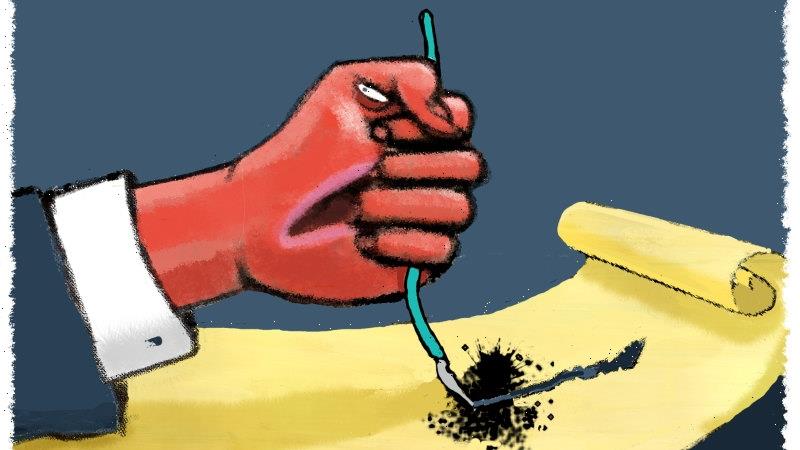 Why is everyone so angry about everything all of the time?

Something’s amiss, isn’t it? “We may live in the first period of human history where every demographic feels that they are somehow being violated and victimised,” writes Mark Manson, capturing something at once familiar and bewildering about our moment.

This is not simply one of those revolutionary moments when the long-downtrodden rise up against their oppressors – as witnessed, for example, at the height of the civil rights struggle in the 1960s, or a century earlier with the women’s suffrage movement.

Sure, that may be part of the story, but such a summary would prove too partial. This is instead a moment when almost any issue can draw sharp lines between us: climate change, taxation, the language on a medical form. It is now entirely common for each of the opposing sides of a vociferous debate to consider themselves shamed and silenced, unable to speak without being branded in some malevolent way. In this respect (and perhaps only in this respect), advocates speaking of the existential erasure of transgender people speak the same language as gender-critical feminists who complain of the erasure of women under the axioms of gender fluidity. 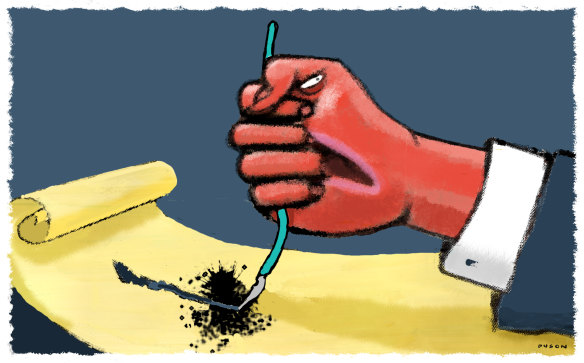 Political discourse has crossed a line from anger to contempt.Credit:Andrew Dyson

Black American activists talk of the existential threat they face at the hands of a white-supremacist culture, while repeated surveys reveal a majority of white Americans think anti-white discrimination is as bad as or worse than discrimination against blacks and other minorities. Among the white working class, the figure rises to about two-thirds.

So often we distil this as Sally, a viewer of the BBC’s Question Time, did in a tweet to the show in 2019: “Why is everyone, so angry about everything, all of the time?” Predictably, that tweet invited its own anger, with respondents sneering at Sally’s excessive use of commas.

But punctuation aside, everyone seems desperate to answer the question. The English-language internet is awash with articles diagnosing the incandescent tone of public debate and doling out advice on how best to handle it, especially with family and friends. That last point is fundamental, not least in the United States, where partisan division has hardened so much that it is now frequently terminating friendships and leaving family members unable to converse.

In 2016, the Pew Research Centre showed just how rapidly and deeply Democratic and Republican voters’ mutual suspicion and disdain was advancing: majorities of each now had a “very unfavourable” view of the other – more than double what it was at the turn of the millennium. By 2020, Pew found that Biden and Trump voters hardly knew each other. A mere 3 per cent of each had “a lot” of friends who supported the opposing candidate. About 40 per cent of each said they had no friends at all who did. Add to them those who have only “a few” such friends, and the number on either side approaches 80 per cent.

Australian polarisation is not quite so severe, but we can easily discern a similar direction of travel. Surveys show that voters regard the major parties as becoming more politically extreme, even though analysis of party policies, speeches and voting records by Political Compass demonstrates that ideologically, they have scarcely moved.

Data aside, we already intuit this. SBS can happily publish a comment piece on “How to survive your conservative relatives this Christmas”, presumably because this seems a familiar concern. The aftermath of the 2019 federal election, in which Queensland played a decisive role, included a proliferation of tweets and memes calling for a “Quexit”, demanding Australia “cut them loose!” This, we think, was a joke, along the lines of “What the hell is wrong with Queensland?” But it was taken seriously enough to prompt earnest think-pieces pleading with Australians, “don’t judge, try to understand us”.

So, anger, sure. Rage, or even outrage, yes. All these are such common descriptions of our age because they capture something of the truth. And yet they miss something, too. People have always gotten angry at their loved ones, but they remained loved. Something deeper is going on here, when it leads not merely to flashes of disagreement but to a more permanent alienation. Whatever’s amiss in public conversation, we don’t seem quite to have diagnosed it precisely.

On September 9, 2016, amid the maelstrom of the US presidential election campaign, Hillary Clinton gave a campaign speech at a fundraiser in which she made what quickly became an infamous observation about Donald Trump’s supporters.

“You know, to just be grossly generalistic, you could put half of Trump’s supporters into what I call a basket of deplorables,” she said, to laughter from the audience. “Right? They’re racist, sexist, homophobic, xenophobic, Islamophobic – you name it. And unfortunately, there are people like that … Now some of those folks, they are irredeemable. But thankfully, they are not America.” By contrast, the other half – the “other basket” – had Clinton’s sympathy. They were people who felt “let down” by government and the economy, “people we have to understand and empathise with”. 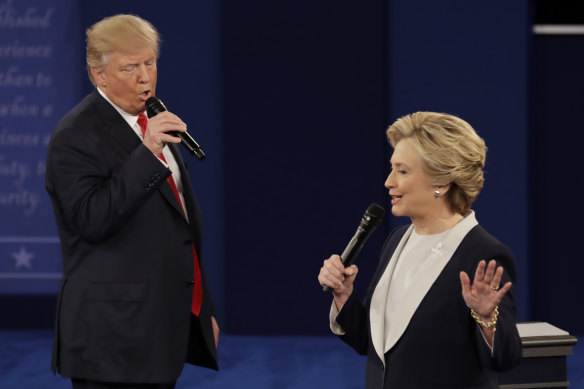 Donald Trump and Hillary Clinton during a 2016 presidential debate.Credit:AP

The furore was immediate. “I regret saying ‘half’ – that was wrong,” Clinton said in a statement, which of course didn’t specify what proportion would have been better. Simultaneously, though, her campaign cited polling showing Trump supporters had negative attitudes towards Latinos, African Americans and Muslims.

“How can you unite the country if you’ve written off tens of millions of Americans?” asked CNN’s Anderson Cooper during the next month’s presidential debate. Clinton replied that her argument was not with Trump’s supporters but with Trump himself. But his supporters didn’t see it that way. They defiantly adopted the label, wearing T-shirts emblazoned with “Deplorable” and hats saying “Proud To Be Deplorable”. At a rally, Trump walked onto the stage to the sound of Do You Hear the People Sing?, the revolutionary anthem from Les Miserables. On the screen behind him was a photoshopped image from the musical with the original flags replaced by a mixture of Trump and American flags, beneath the parodic heading Les Deplorables.

It was a turning point. Clinton later conceded it contributed to her defeat, but people who worked on her campaign were more forthright. “All hell broke loose,” wrote a Clinton pollster, identifying it as the moment “I saw more undecided voters shift to Trump than any other, when it all changed …”

“Deplorable” and “irredeemable” are words with enormous weight. They go to the very worth of people.

This potent response, much like our public conversation, is rooted in something more than mere anger. And it was Trump’s senior communications adviser, Jason Miller, who identified it with precision: “Just when Hillary Clinton said she was going to start running a positive campaign, she ripped off her mask and revealed her true contempt for everyday Americans.”

There it was. Contempt.

“Deplorable” and “irredeemable” are words with enormous weight. They go to the very worth of people. They signal a kind of excision, a total severance between the describer and the described, even a desire for excommunication. No doubt having honed the line of attack carefully, Trump was incisive in his response. Here he is, standing in front of his Les Deplorables banner, on Clinton’s use of “irredeemable”: “Boy, that second word is tough. You don’t hear that as much, but that means you’re never going to come back, folks … Irredeemable, they don’t talk about that one, but that was, to me, pretty bad.”

You’re never going to come back, much like that friend or family member who is cut off, or the entire state people want to excise. The problem isn’t merely polarisation. It’s the contempt with which each side regards the other. Once that happens, political debate ceases to be an exchange, heated or otherwise. It ceases to be about persuasion. It becomes existential. This, we suspect, is what people are trying to capture when they say things like “everyone is angry about everything all the time”.

Australian politics has had no shortage of contemptuous episodes, led by politicians and echoed by their followers. Here it would be easy – and accurate – to cite the sexist hectoring of Julia Gillard during her prime ministership, or the frequent dehumanising of asylum seekers in which politicians were prepared to accuse some of them of setting themselves on fire or throwing their children into the sea as a cynical strategy to cheat their way to Australia.

But it has also infected our climate wars, in which ardent demands to shut down coal mines, for instance, tend to come from those who stand to lose the least from this, with little regard for the communities whose history and identities are so bound up in the coal industry – viewing them as a problem to be overcome rather than people whose lives and concerns are to be taken seriously. This took an issue on which some agreement may have been brokered and made it an identity conflict, and ultimately a culture war. So, in the words of the Labor-aligned mayor of Isaac Regional Council in central Queensland, “to date, it’s been an ‘us and them’ discussion, not a ‘we’ discussion … We’re not talking about not setting a target. We’re not naive to climate change. Our message is, ‘We feel invisible’.”

That is why the “Stop Adani” convoy from Tasmania to North Queensland during the 2019 election campaign would have seemed contemptuous to so many. Here was a group of southern interlopers, with no deep concern for the lives of those up north, demanding they forgo what many will have seen as an economic opportunity, while their own jobs in the knowledge economy were secure. Local politicians credit this convoy with solidifying the swing away from Labor in Queensland that year. This sort of approach also underwrites the rhetoric of Nationals leaders – itself contemptuous – that banging on about climate change is the preserve of “inner-city raving lunatics”. None of this has been productive.

When more and more issues become like this, and politics becomes primarily a matter of condemning and vanquishing the opposition, a democratic society finds itself in serious trouble.

Democracy cannot survive contempt. Democracy is about cultivating a common life even in the presence of serious disagreement. Contempt is about having no life in common at all.

This is an edited extract of Waleed Aly and Scott Stephen’s Quarterly Essay, Uncivil War: How Contempt is Corroding Democracy, published on September 5

The Morning Edition newsletter is our guide to the day’s most important and interesting stories, analysis and insights. Sign up here..