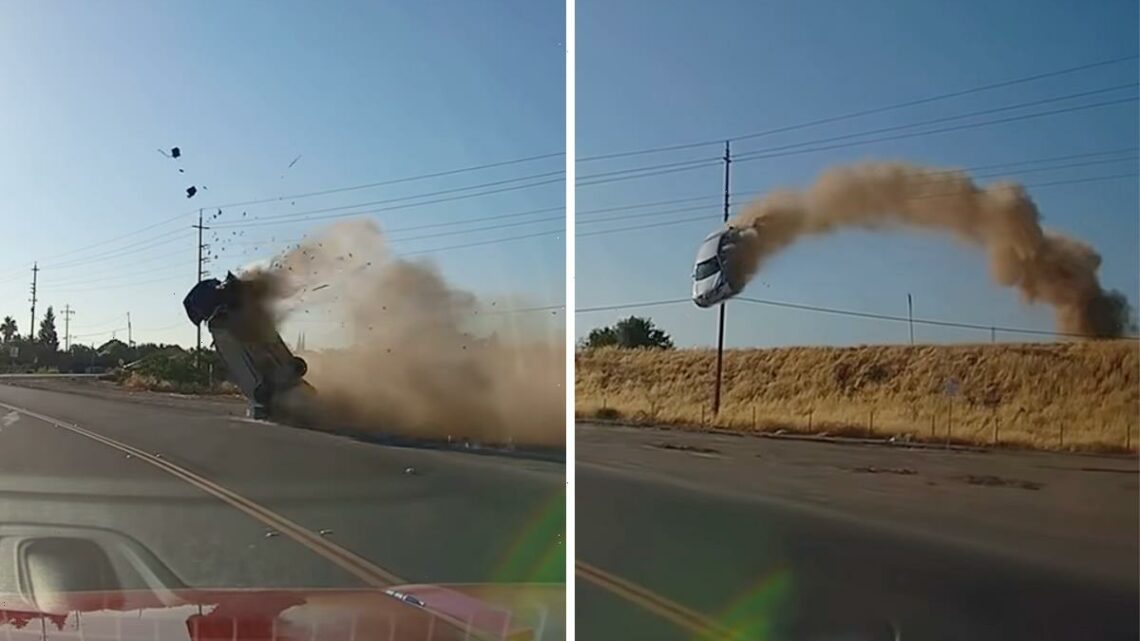 A WILD dashcam video caught the moment a car flew through the air over a California highway, narrowly avoiding a power line before crashing down just feet in front of oncoming traffic.

Remarkably nobody was seriously hurt in the incident along Highway 99 in Yuba City on Wednesday – including the driver of the car, who walked away only with minor injuries. 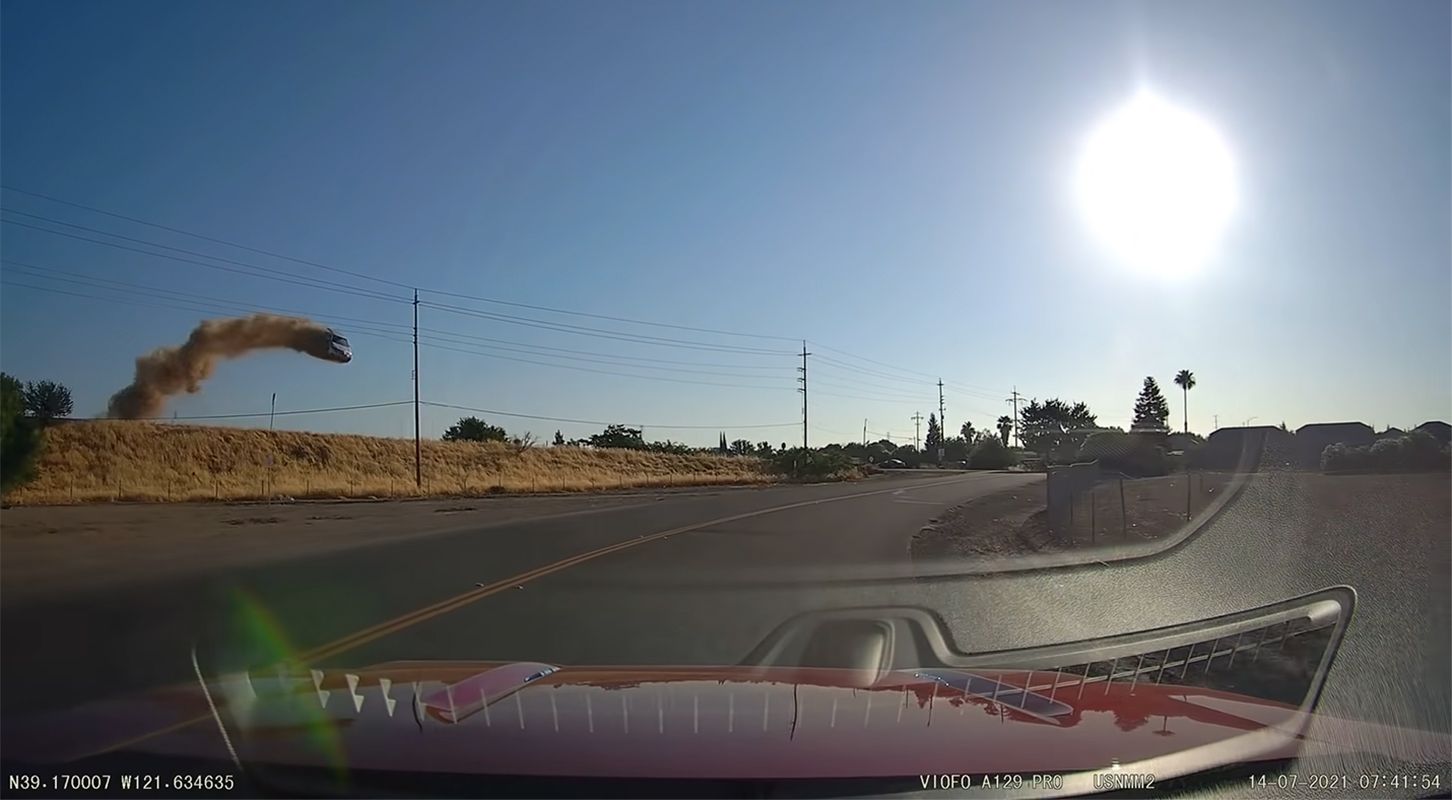 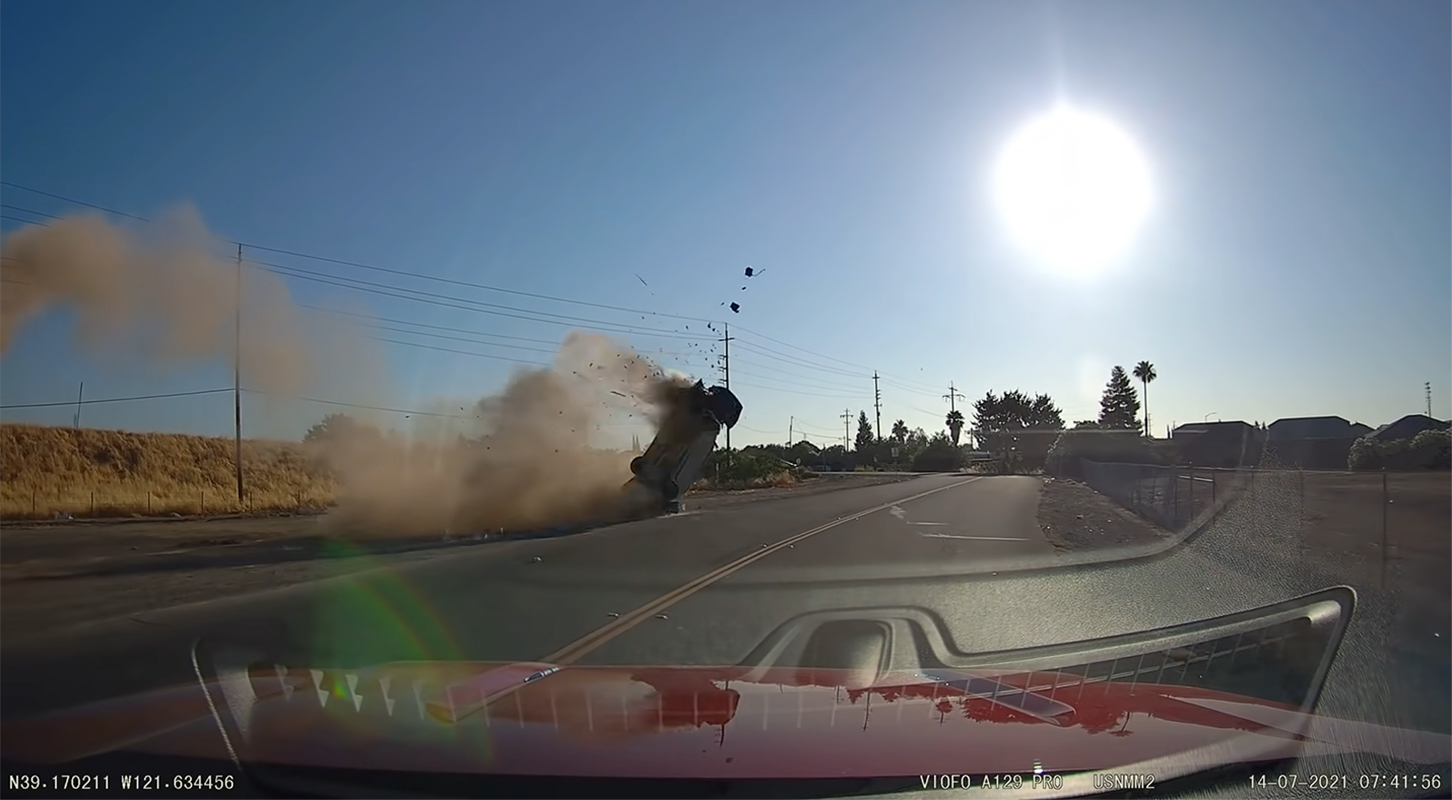 In a scene that wouldn't have looked out of place in the latest Fast and Furious movie, the footage shows a man driving a truck down a winding road as suddenly a white car can be seen flying through the air, leaving a trail of brown smoke behind it.

A passenger in the truck can be heard screaming, causing the driver to slam on his breaks as he notices the vehicle catapulting through the air.

As the truck comes to a stop, the car nosedives onto the asphalt just meters in front of them.

The car cartwheels over several times before finally landing on its roof, leaving debris scattered throughout the road.

The truck driver and the female passenger race to call 911, struggling to articulate to the dispatcher what they've just witnessed.

"It just jumped the whole road," the male passenger is heard saying.

He then gets out of the truck as the female passenger stays on the phone with the dispatcher, running over to the smoking car as another bystander also rushes over to help.

Incredibly, the woman behind the wheel of the car survived the wreck and was taken to a nearby hospital.

Not only did she survive, she later walked out of the hospital with only minor injuries, police told CBS 14.

A witness told the network the car had been involved in a hit-and-run just moments earlier and was driving backward on Highway 99, exiting an on-ramp.

The car then missed a "really hard left-turn," Brian Canejo said, and then went off the road, up an embankment, before catapulting into the air.

“It looks like they pretty much threaded the needle between the power lines,” Conejo said.

“We would have lost power, it probably would have started a fire in all that dead grass. It could have been a lot worse for them I’m sure,” he added.

The Califonia Highway Patrol says they do not believe alcohol was a factor in the crash.

Officials did not comment on the initial hit and run and so far no charges have been filed. 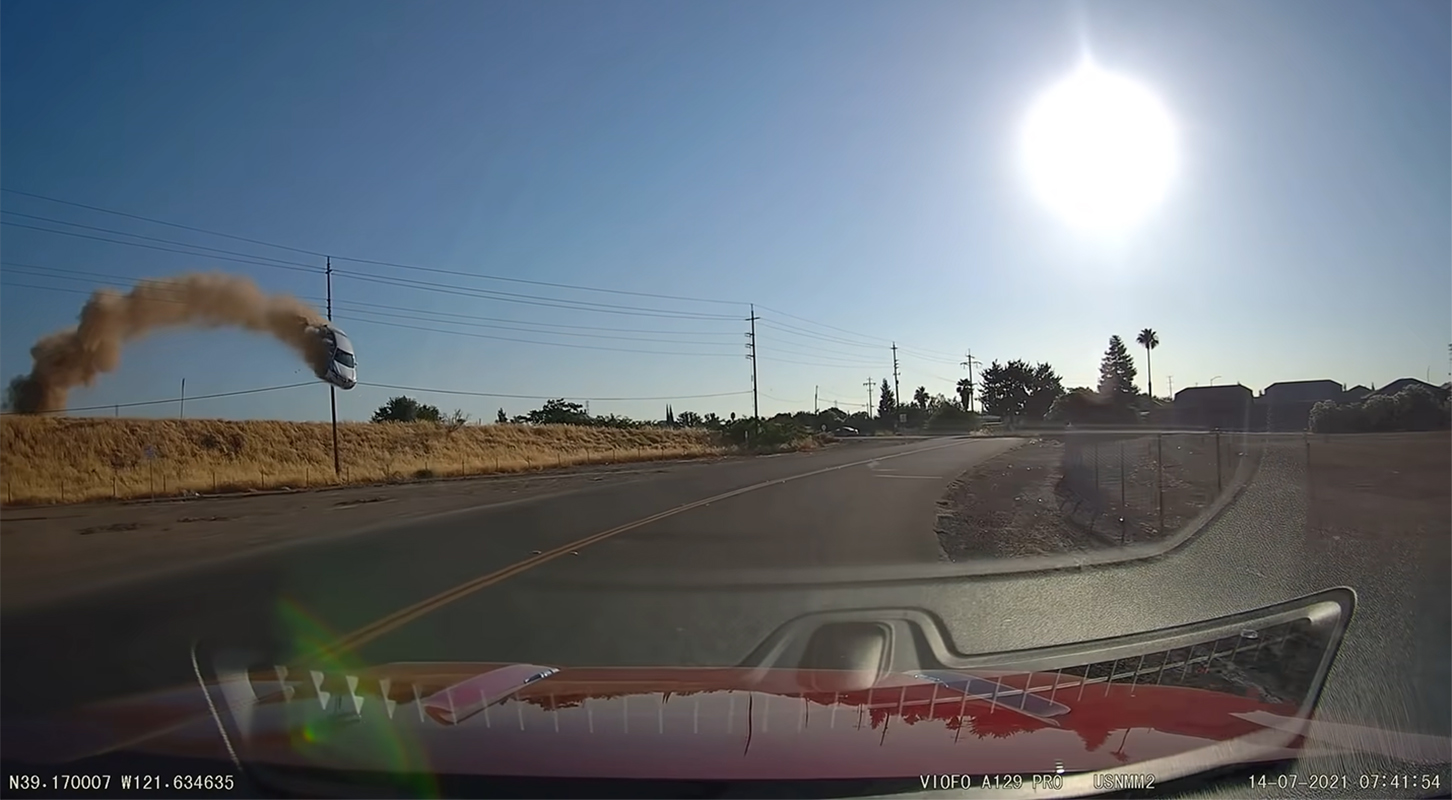 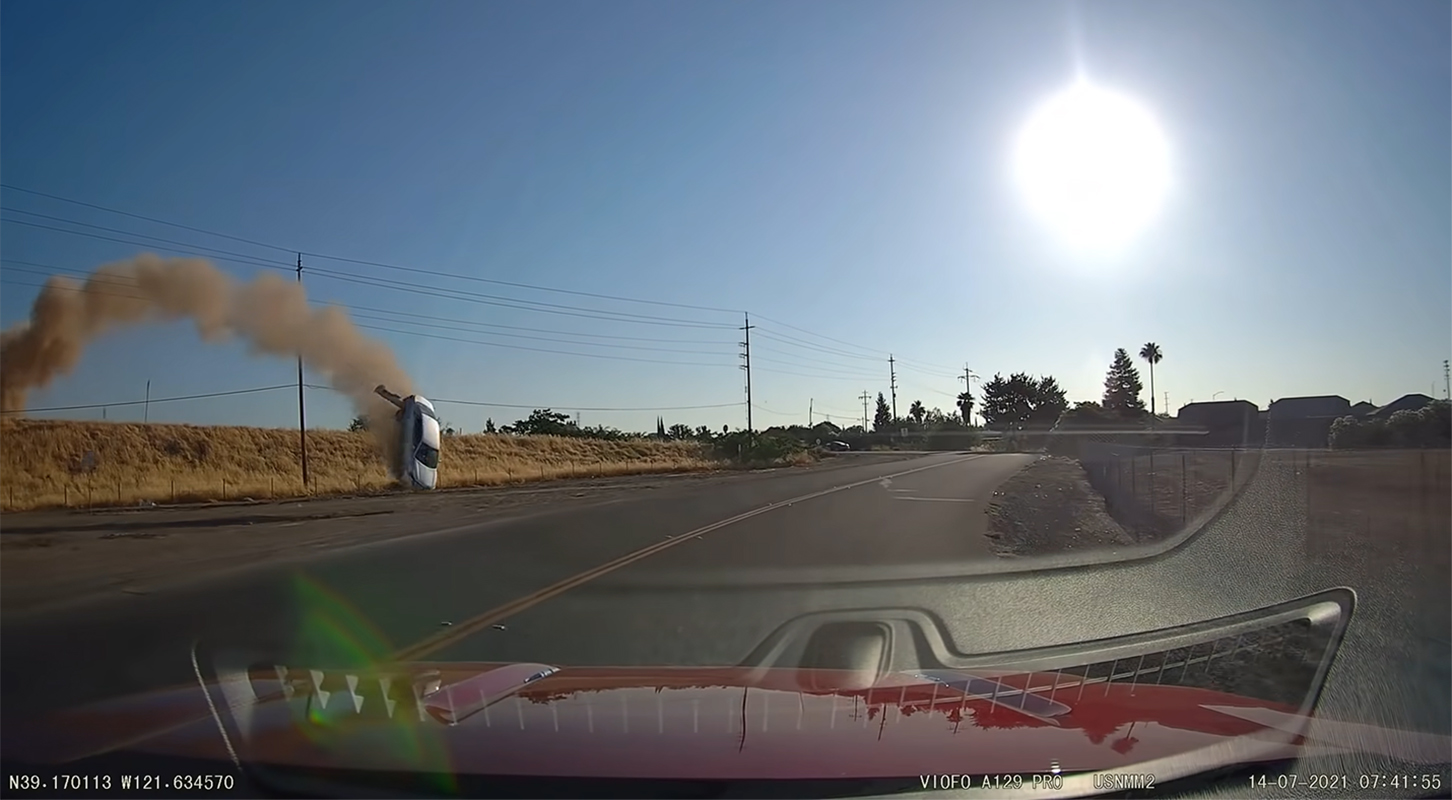 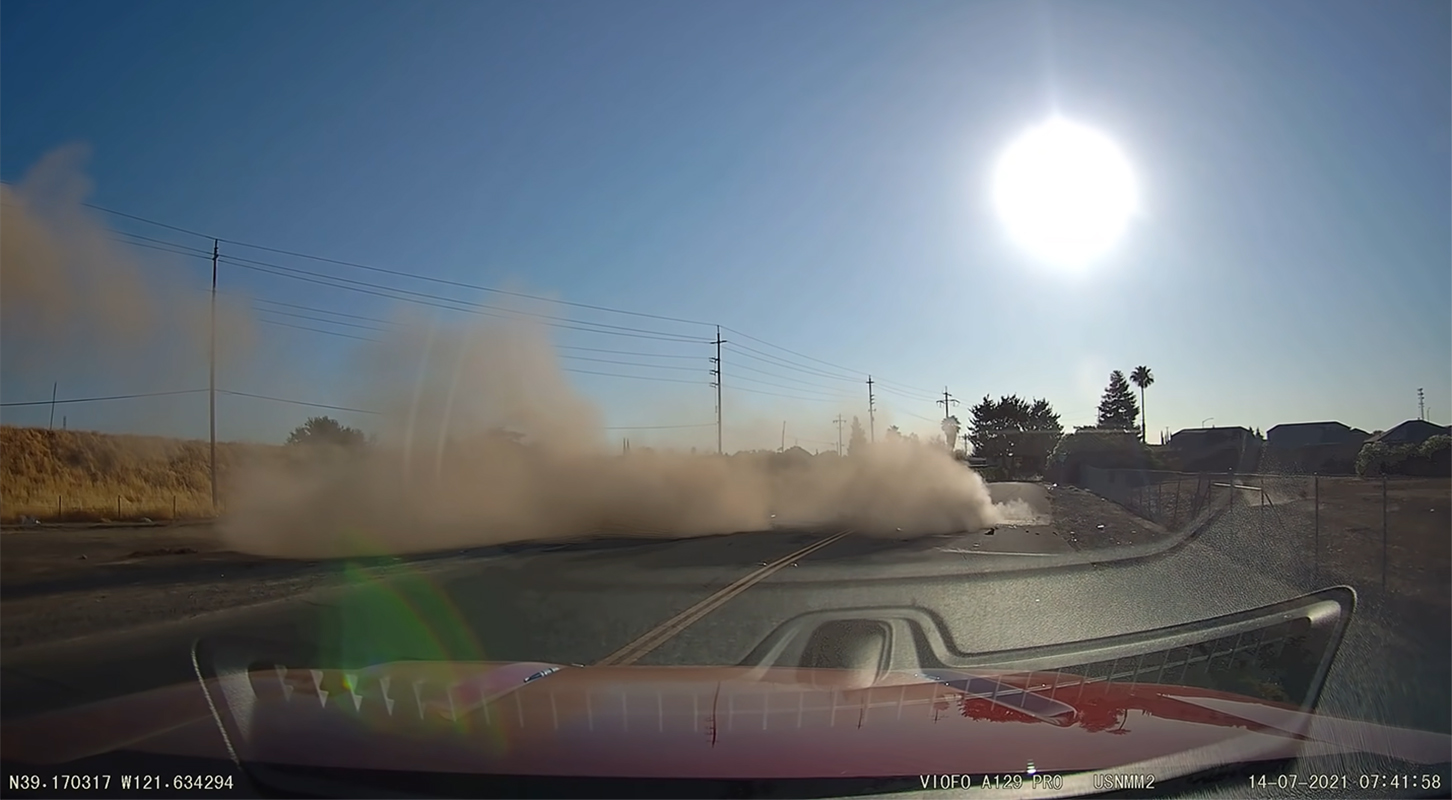