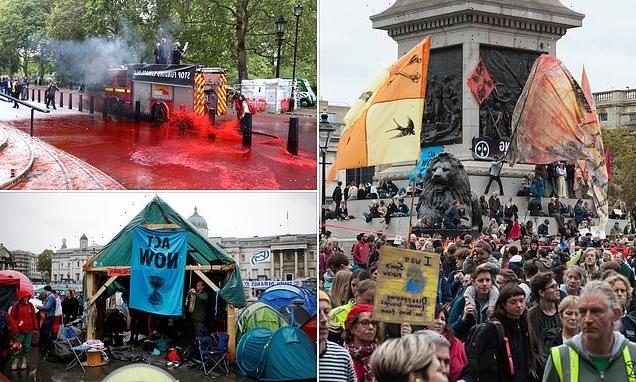 Extinction Rebellion’s last London demo left 120 TONS of rubbish on the streets that cost £50,000 to clean up, claims MP as activists bring capital to a standstill again

Extinction Rebellion, the environmental campaigning group, left 120 tonnes of rubbish on London’s streets when they last took over the capital, an MP has warned.

The mess cost taxpayers £50,000 to clean up after they shut down major roads and streets in London in October 2019 in a bid to encourage the Government to tackle climate change.

Nickie Aiken, Conservative MP for Cities of London and Westminster, revealed the cost of the demonstration to her constituency as the activists target London’s streets again.

The former leader of City of Westminster Council told the Telegraph: ‘The disruption to local people and businesses is immeasurable. 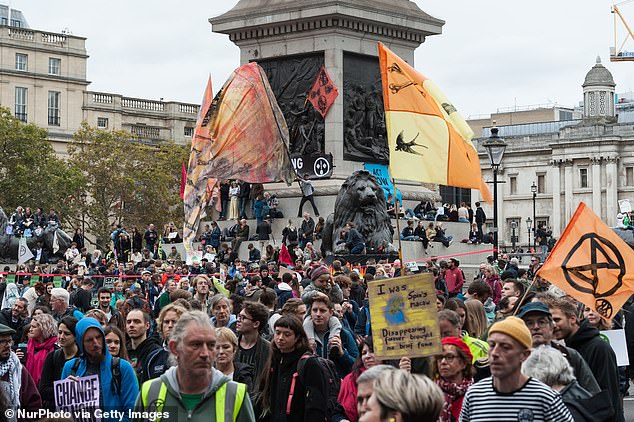 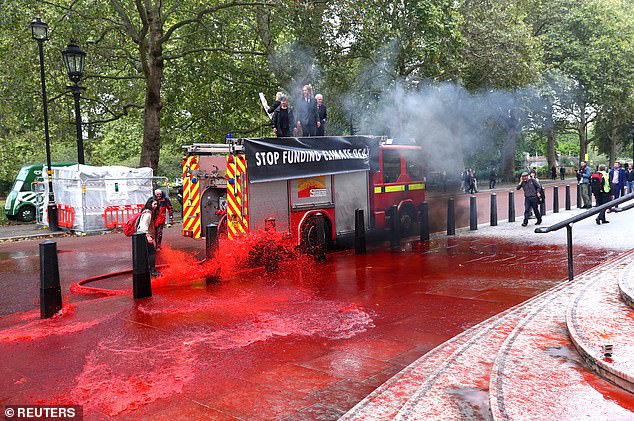 Extinction Rebellion protestors demonstrate outside the Treasury building on October 3, 2019

‘I was told by the council that last time Extinction Rebellion were here for two weeks, they cleared 120 tons of rubbish left behind.

‘Westminster and the City of London are considered very wealthy areas, but I want to remind people that actually it’s not all about wealth.

‘There are major areas of deprivation in central London and 25 per cent of homes are social rented.

‘The wealthy who live here have gone for the summer, so it’s those who live here permanently and can’t escape who are living with this so-called ‘beautiful chaos’.’

Extinction Rebellion started a fortnight of action earlier this week and brought parts of London, including Oxford Circus and the West End, to a standstill. 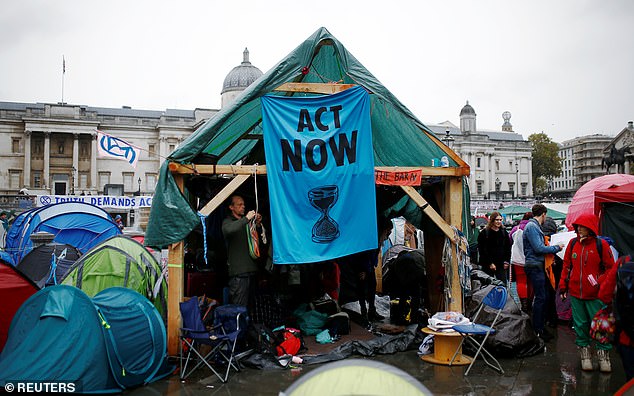 Protesters camp at the Trafalgar Square during an XR demonstration on October 12, 2019 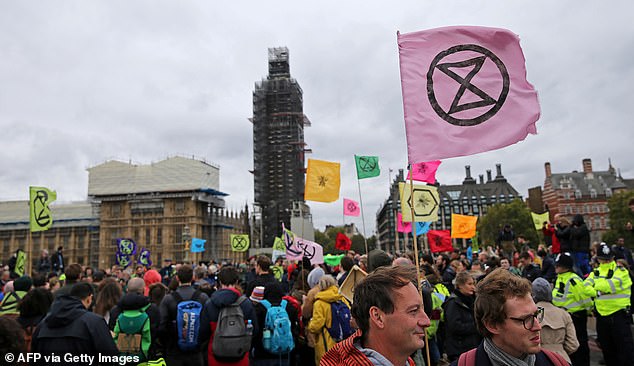 Chaos: In this file photo taken on October 07, 2019 activists gather on Westminster Bridge during a demonstration by the climate change group Extinction Rebellion in central London 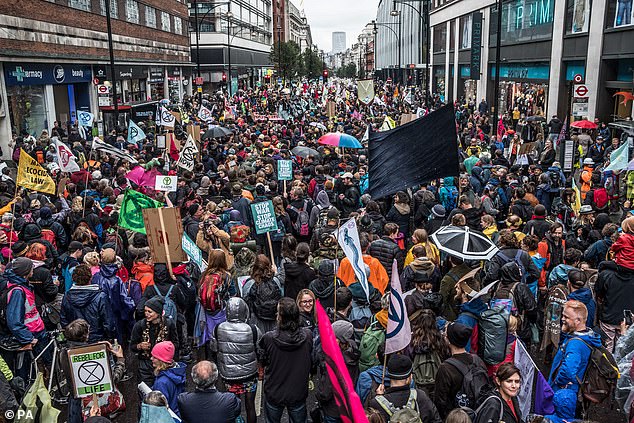 The action began on Monday when protestors set up a giant pink table by Leicester Square in a bid to encourage ‘crisis talks’ and asking the Government to ‘come to the table’.

The group said the demonstration was to urge the UK Government to immediately stop all new fossil fuel investments.

On Tuesday, four members of Extinction Rebellion Fashion Action glued themselves to the front door of Selfridges on Oxford Street.

They were wearing a dress which displayed the messages: ‘Fashion is addicted to dirty oil’ and ‘Code red for fossil fuel fashion’.

Other members of the protest poured fake oil over the activists and then proceeded to pour fake oil over the windows of the iconic British department store to further highlight the fashion industry’s increasing reliance on fossil fuels, they said.

The following day a large number of protestors blocked Oxford Circus with another giant pink table with a banner reading ‘come to the table’. 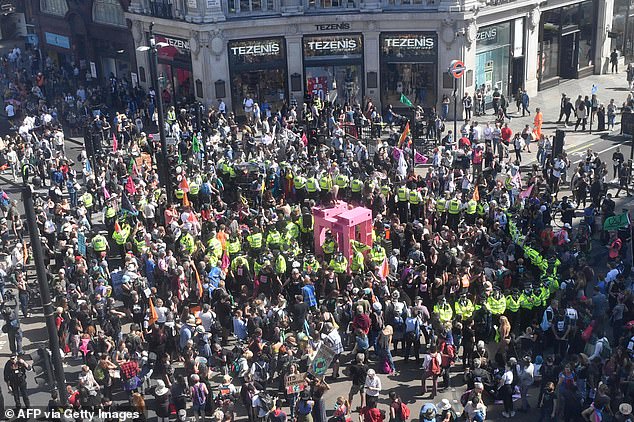 Police form a ring around a pink structure the demonstrators erected on Wednesday afternoon in Oxford Circus, central London, during the group’s ‘Impossible Rebellion’ series of actions 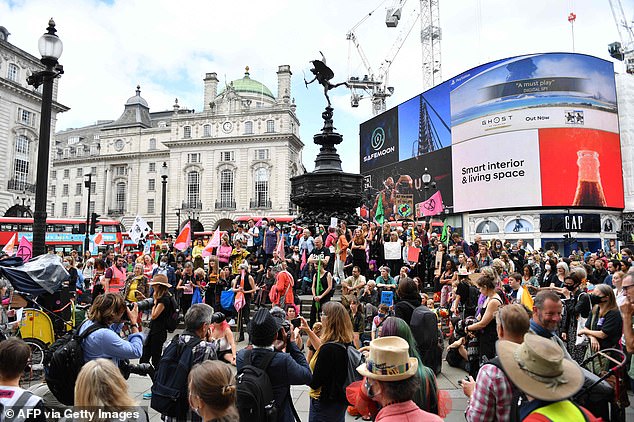 Pictured: The protesters rammed the streets in Piccadilly Circus earlier this week – blocking commuters from getting by – and blurted out rehearsed speeches through a microphone

A group also gathered outside the Brazilian Embassy and another group gathered at Piccadilly.

Elsewhere, demonstrators from sister group Animal Rebellion were joined by some XR activists and glued themselves to tables in the Leicester Square McDonalds in a bid to encourage the fast food giant to switch to a plant based menu.

The Metropolitan Police have arrested 236 people for a variety of offences in connection with the demonstrations since Sunday.

In response to yesterday’s action, a spokesman for the force said: ‘Officers encouraged people to leave but as the assembly did not disperse conditions were imposed at 15.47hrs under s14 of the Public Order Act.

‘Officers subsequently began arresting those who refused to comply, and specially trained officers are safely removing those locked on or glued in situ.

‘This is a complex operation, where the safety of the public and those protesting is actively taken into consideration.’ 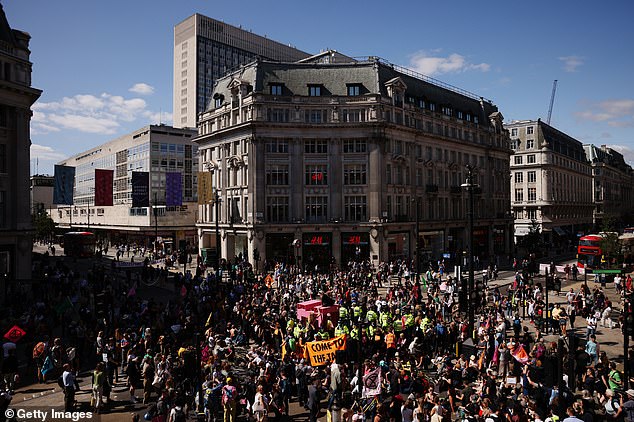 An Extinction Rebellion spokesman said: ‘As Westminster Council will confirm, the £50,000 figure was a ‘service’ cost, meaning the total cost of council services that were temporarily redeployed during our two-week October 2019 protests.

‘The 120 tons of rubbish collected took place over a two-week period. To put that figure into comparison, during London’s New Year celebrations 2016-17, Westminster cleared up 85 tons of rubbish from just one night.

‘As anyone who has been to an Extinction Rebellion protest will know, we are scrupulous about clearing up after ourselves and ask rebels to respect the spaces they’re in and take their rubbish home. Why don’t you come down and see for yourself?’

What time is Champions League group stage draw, what TV channel is it on, can I live stream it free & what are the pots?

'The Kissing Booth 3': Chloe Actor Maisie Richardson-Sellers Has Played Both a Superhero and a God
Recent Posts